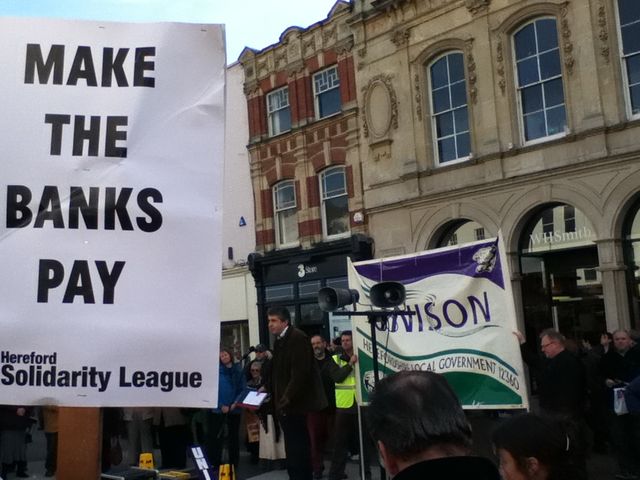 Workers from many industries took strike action on Wednesday to defend attacks on their pensions from the Tory government.

Teachers, paramedics, nurses, local government staff and others from across Herefordshire downed tools and took part in the strike.

Picket lines were in place outside many offices and schools and over 200 people attended the midday rally in High Town, where speeches were heard from a number of union officials.

Unison organiser, Steve Akers, called on workers to “debate and win the arguments surrounding the pensions and cuts in your communities, workplaces, pubs and clubs”. “Go back to work and organise,” he said.

Herefordshire Unison are continuing to organise around the pensions issue and have called another strike committee meeting for next Tuesday 6th December. Taking place at 12.30 at the Town or Shire Hall (TBC), the meeting is currently open to officials from local union branches only.

Yet the Heckler believes that these meetings should be open to all people affected by the pensions issue, including workers, families, service users and all involved in the struggle against government cuts.

Strike action around the region also received great support. Six hundred people took part in a march in Worcester, after speeches and a rally at Tramps Nightclub. Unions have said over 75% of Worcestershire teachers were on strike. In Gloucester 2,000 people joined the mass rally at Gloucester Park, after marching from Shire Hall.

For the full article and pictures go to -