In Portland, Oregon, Occupy Oregon (also known as Occupy PDX) re-occupied Shermanski Park last night. They setup tents, tarps, and folding tables at 4:35 pm PST. A police officer drove by and informed the occupiers it was illegal to “camp” in a public park. The occupiers continued to setup the new encampment. Families with their children were there and a kitchen went up in the park too. They even had a bat signal shining on a building that was able to broadcast text messages from people all over the world. 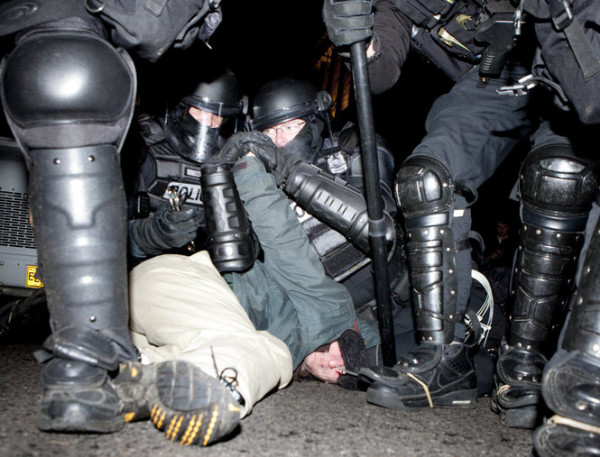 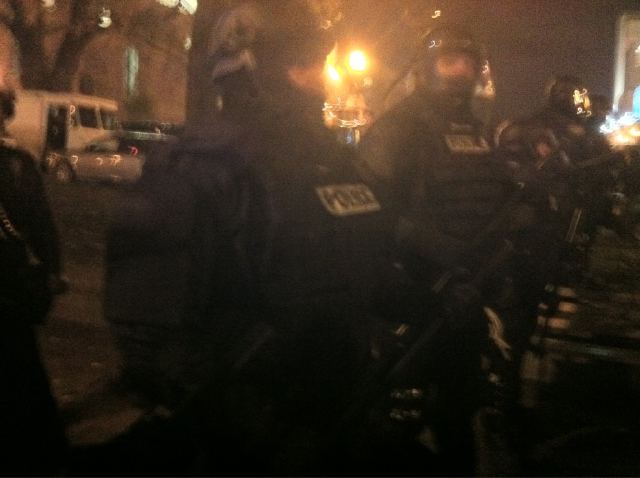 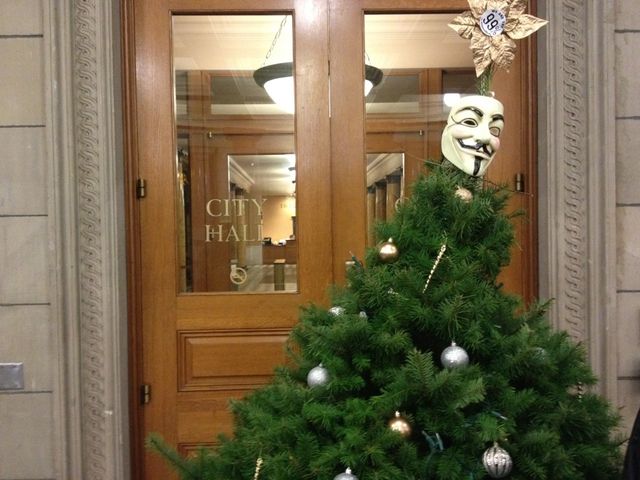 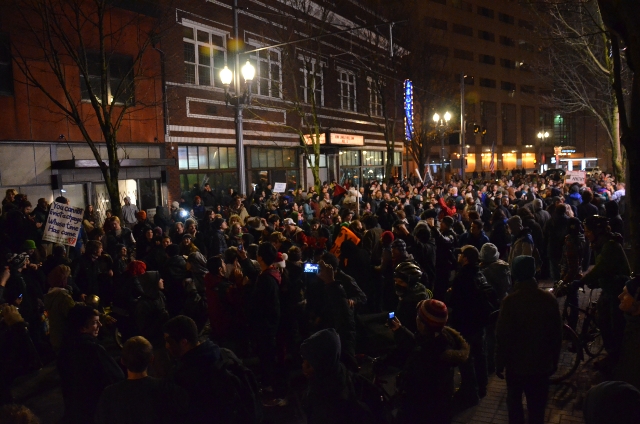 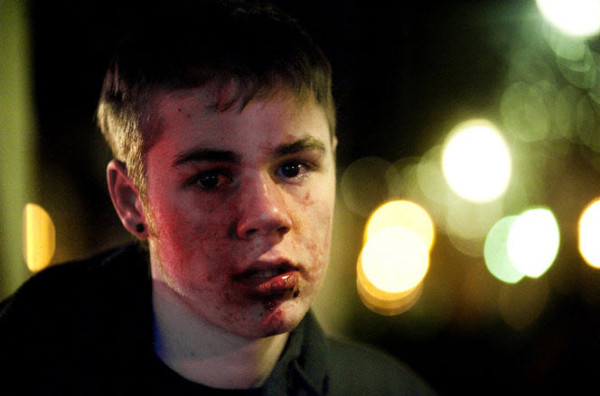 A blog for the Portland Mercury described the forceful eviction of occupiers:

Several lines of riot police stretching the entire width of the park advanced into the park, using their batons to jab protesters who stayed put. It was definitely a rougher confrontation than previous interactions between Occupy Portland and the police. There were several reports of injuries, say Denis Theriault and Matt Bors, with several protesters showing split lips and bruises. One protest organizer named Mike Bluehair was shoved to the ground by police and allegedly kicked.

“They shoved me and fell to the ground, then they started kneeing me and kicking me. But they let me up, though,” says Mike.

There was no use of pepper spray, or even a warning that it might be used. An ambulance were called to treat injured protesters, though it’s unclear right now whether any are serious. A number of people who refused to leave the park were also arrested…

Portland Mercury also reported occupiers did have a plan to split off: some would stay and get arrested and others would march to City Hall. That is exactly what happened next. Three to four hundred people took off. It was a “raucous party” and at one point someone had “a Christmas tree and there [was] a dude with a gas mask up on the balcony” outside a Portland commissioner’s office.

Occupiers left City Hall around 10 pm PST and was in Old Town. The police kept a distance and followed the occupiers wherever they were going to go. Then, suddenly, the occupiers ran at full speed to the park where they had been previously. “A Michael Jackson dance party” with 600-800 people broke out. Only a handful of police officers were around. And more people were there than before the police raid.

Finally, the Portland Mercury live blog reported police did exactly what one would have expected: they amassed around the park for another raid. But then here’s what happened:

Over the police scanner, an officer said, “Is there anybody who’s not in position?” Then the order was given to “roll”… swiftly followed by an order to hold off. Then, at about 11:50, a voice over the scanner said, “All units return to Central, where we’ll write reports & hopefully have pizza. I’ll explain when I get there.” The order was repeated: “I want every officer who was out here tonight to return to Central and write reports.”

A few sections of the statement merit attention. Max Blumenthal wrote about the “Israelification” of national security in America so it is worth noting the language here about children:

Officers noted during the clearing of the park that there were some children, ages ranging from approximately 8 to 12, near the front line of the demonstration. Officers advised to the parents to get the children out of the park but in one case, a small child was pushed to the front by an adult in apparent attempt to use the child as a human shield. There are no reports that any children were injured or had police contact and they ultimately left the park with adults.[emphasis added]

Using children as “human shields” is what Israeli military accuse Palestinians of doing. It is what the US military has said before of “terrorists” in war zones when military strikes wind up killing not only “militants” but also children.

Then, there is this peculiar section. It is the standard section included to make the demonstrators look nefarious but which instead seems raise more peculiar questions about the police and what they were doing at the protest:

Officers walking the area after the park closure located a cluster of spent shell casings on the east sidewalk of Southwest Park Avenue, along the back side of the Arlene Schnitzer Concert Hall. The shell casings appeared to be .22 caliber and 9mm (photos attached). There were no reports of gunfire and it is unclear why they were on the sidewalk in an area that demonstrators had been standing. In an earlier demonstration (different date), officers reported that someone in the crowd threw empty .223 shell casings at the police officers. It is not clear why or who is bringing empty shell casings to a demonstration.

Maybe it isn’t clear because someone within the camp—I don’t know, perhaps an undercover or “embedded police officer”—left the shell casings as a nice touch to help justify inexcusable police violence. Perhaps someone whom other officers aren’t supposed to acknowledge was there and left them. Maybe he is the same one who in an earlier demonstration threw empty shell casings at officers. I’m no more sure of the motive or whether an undercover is doing this than the Portland Police is of demonstrators having shell casings. But, that won’t stop me from speculating in my official blog and I fully expect all who read this to begin to wonder about the integrity of Portland Police because, who would drop empty shell casings around an area where people were protesting to make it seem like there were occupiers who were violent and needed to be looked out for, like maybe a “lone wolf” that could strike any time?