Thank you Joker for not playing with Israeli Apartheid

Joker (Dubstep) was due to play in Tel Aviv for Hanukkah celebrations on 20th December 2011. He was contacted by fans on Facebook asking him to cancel his performance and not support Israeli Apartheid. Joker aksed his fans what he should do and after understanding their replies drew his own decision on the matter. 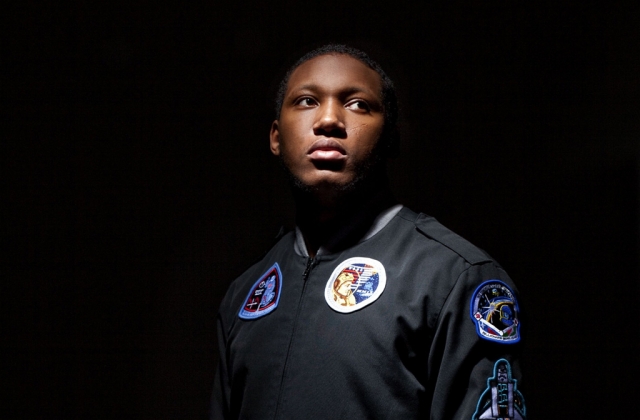 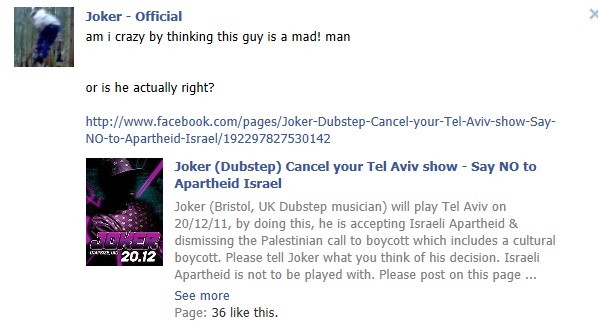 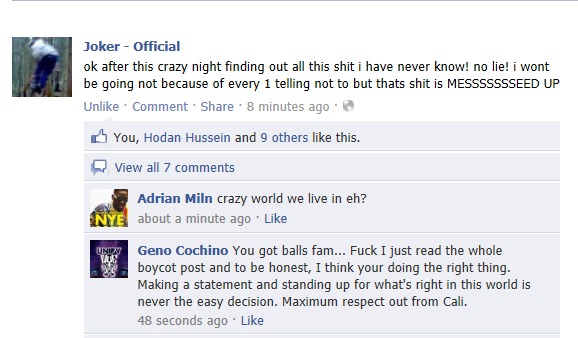 Joker draws his own conclusion with his early morning statement 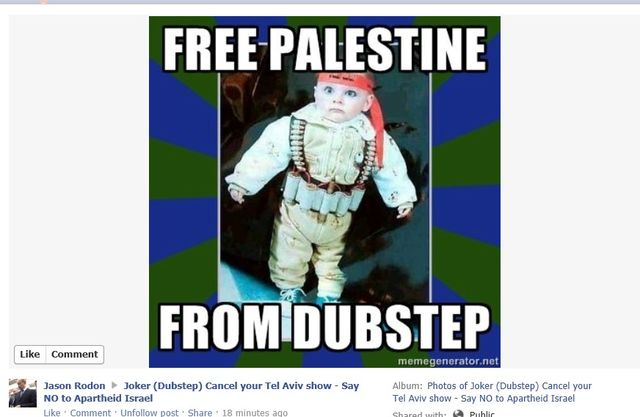 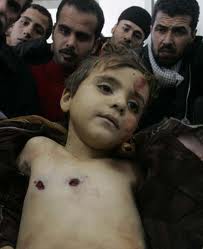 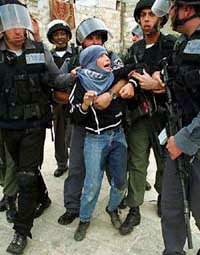 Joker (Dubsteps) asked his fans on Facebook last night whether the Facebook page asking him not to perform in Tel Aviv on 20th December and to observe the Palestinian call to boycott Apartheid Israel was 'mad'. His fans replied and by 5am we had his decision.

Joker, a UK Dubstep musical artist from Bristol announced he will be playing Tel Aviv on 20th December 2011 at Clutch (4 Ha'taarouca St.).

Fans contacted Joker on his official Facebook page and created a page titled ‘Joker (Dubstep) Cancel your Tel Aviv show - Say NO to Apartheid Israel’. After seeing this page posted on his wall, Joker asks, ‘am i crazy by thinking this guy is a mad! man….or is he actually right?

Within 2 hours there were over 76 messages of reply posted by fans, largely supporting the proposed ‘mad man’ and in unison, asking Joker to cancel his performance inTel Aviv and support the Palestinian civil call for a global boycott ofIsrael.

One fan replied ‘You're doing your thing, not supporting apartheid. Don't let these haters stop you...’ and another ‘Playing in Israel does note = Apartheid sponsor. Do your thing bruh’

The RussellTribunal session held in South Africa in November 2011, found that the entire state of Israel (not just the occupied territories) is guilty of the crimes of Apartheid and persecution. Jury members included Alice Walker who met Martin Luther King Jr. as a student and credits King for her decision to return to the American South as an activist for the Civil Rights Movement. She marched with thousands in the 1963 March on Washington and volunteered to register black voters in Georgia and Mississippi; and Ronnie Kasrils, a veteran of the South African anti-apartheid struggle and a former member of Nelson Mandela's government.

In July 2011, the South African advertising & media watchdog (ASA) ruled that Israel can be called an Apartheid State, after dismissing a complaint by the South African Jewish Board of Deputies that to do so was “untrue, not supported by any evidence…and contains a lie which amounts to false propaganda”. Reggae DJ the Admiral, a member of South African Artists Against Apartheid, welcomed the ruling: "The ASA decision is significant due to our own history of Apartheid. The decision sends a clear message to the Zionist lobby that the time has come for an end to the baseless accusations of 'discrimination' and 'hate speech' whenever criticism of Israelis voiced. Calling Israel an Apartheid state is legitimate because Israel practices Apartheid. The boycott of such an oppressive regime should be supported as it was in our own Anti-Apartheid freedom struggle."

In 2004, the International Courts of Justice (ICJ) ruled that the Israeli Apartheid wall being built around the West Bank was illegal and should be dismantled. As a result of the subsequent failure of world leaders to implement this ICJ decision, in 2005 the Palestinian Civil society called for a global people’s response to launch broad boycotts, implement divestment initiatives and to demand sanctions against Israel (BDS), until Palestinian rights are recognised in full compliance with international law.

The BDScampaign is shaped by a rights-based approach and urges various forms of boycott against Israel until it meets its obligations under international law by:

1. Ending its occupation and colonization of all Arab lands occupied in June 1967 and dismantling the Wall;

2. Recognizing the fundamental rights of theArab-Palestinian citizens of Israel to full equality; and

3. Respecting, protecting and promoting the rights of Palestinian refugees to return to their homes and properties as stipulated in UN Resolution 194.

Israel seeks to whitewash its Apartheid crimes by purposely seeking to boost its image internationally through musical culture. As part of the boycott, academics, artists and consumers are campaigning against such collaboration and ‘rebranding’.

A growing number of artists have refused to exhibit or play in Israel. As one fan posted on Jokers’ wall - ‘Macy Gray [said]: “I had a reality check and I stated that I definitely would not have played there if I had known even the little that I know now.”

The comment also included a statement by ‘Faithless: “We’ve been asked to do some shows this summer in your country and, with the heaviest of hearts, I have regretfully declined the invitation. While human beings are being willfully denied not just their rights but their needs for their children and grandparents and themselves, I feel deeply that I should not be sending even tacit signals that this is either ‘normal’ or ‘ok’.”

Other Joker fans wrote of Arch Bishop Desmond Tutus words when supporting the recent ‘OneWorld’ song ‘Freedom for Palestine’ (featuring Feat: Maxi Jazz (Faithless), Dave Randall (Slovo/Faithless), LSK, the Durban Gospel Choir, and others), where in a video he says ‘I have visited the occupied Palestinian territories and have witnessed the humiliation of Palestinians at Israeli military checkpoints. The inhumanity that won’t let ambulances reach the injured, farmers tend their land or children attend school. This treatment is familiar to me and the many black South Africans that who were corralled & harassed by the security forces of the apartheid government.

A fan posted to Jokers wall similar sentiment expressed by Alice Walker [who said] "Going through Israeli checkpoints is like going back in time to American Civil Rights struggle...I am a big supporter of BDS. I frankly think that it is the best, absolutely the best way."

Joker may not know about war or his age but one thing for certain, Joker fans made him aware of the reality of Israeli apartheid. The only question left was whether apartheid is something that agrees with the Joker? We waited to see.

Much to our admiration, after a heated night of fans contacting Joker by email, Twitter and Facebook, Joker updated his status on his Facebook page at around 5am to say:

'ok after this crazy night finding out all this shit i have never know! no lie! i wont be going not because of every 1 telling not to but thats shit is MESSSSSSSEED UP'.

We thank Joker with much respect, for his solidarity, for standing with the People of Palestine and supporting their global call to 'Boycott, Divest from and Sanction' Israel with a view to ending Israeli Apartheid.

Thank you brother, in peace and Solidarity.