Lindis Percy, of the Campaign for the Accountability of American Bases (CAAB) was at the American information gathering and surveillance base at Menwith Hill on Saturday afternoon in solidarity with Bradley Manning as part of the international day of action called on the occasion of his 24th birthday and the second day of his pre-trial hearing at Fort Meade, Maryland, USA. 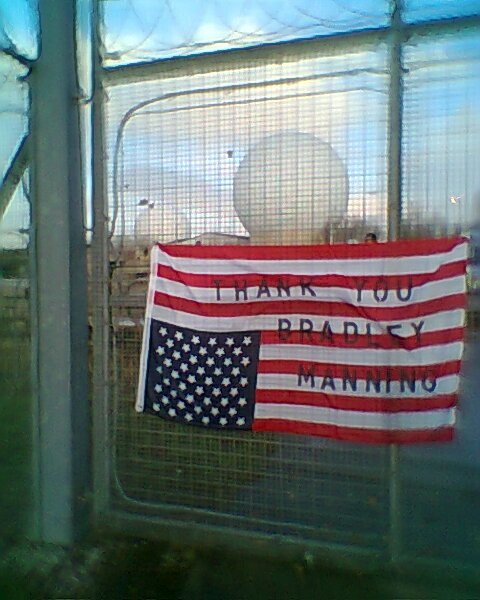 Lindis displayed an upside down American flag with the words "Thank you Bradley Manning" written on it. CAAB has used the upside down US flag for many years and went to the High Court in 1998 to defend its right to do so.

Afterwards, the flag was left up on the perimeter fence of the base. This means that it would have been taken down by either the Counter Terrorist Unit (North Yorkshire Police) or the Ministry of Defence Police Agency and a report written for the US authorities.

"None of the police I talked to (except one and he had to be reminded) had heard of Bradley Manning. So I was glad I went."

The secretive American Menwith Hill base in North Yorkshire is the largest intelligence gathering and surveillance facility in the world and is totally out of the control of the British government. Menwith Hill is linked directly with the National Security Agency (NSA) headquarters at Fort Meade in Maryland. Bradley Manning's pre-trial hearing is currently being held at Fort Meade. More about Menwith Hill here.