Hasbara Strategy to Campaigns Pursuing an end to Israeli Apartheid 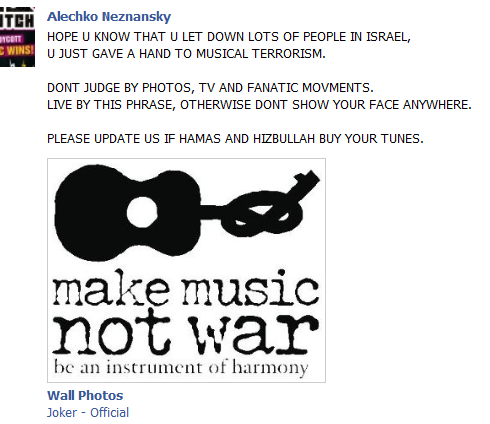 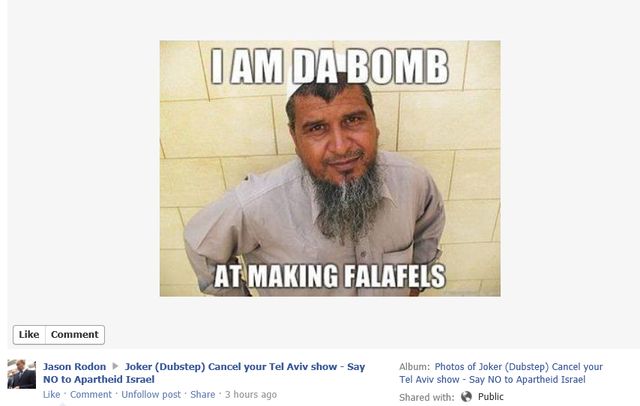 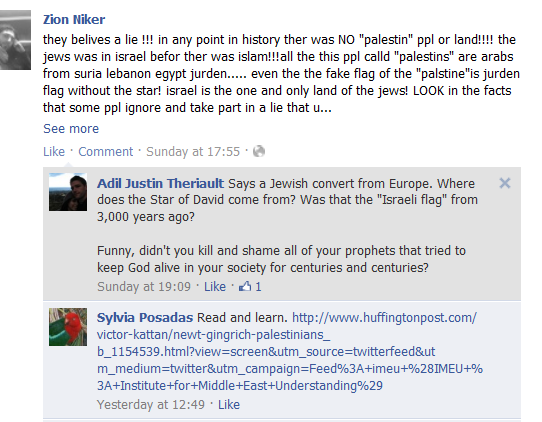 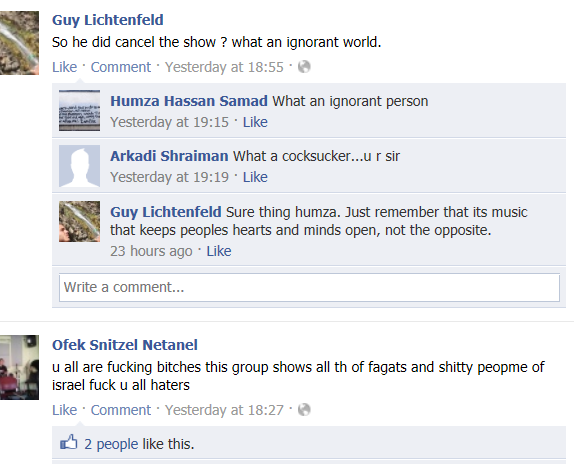 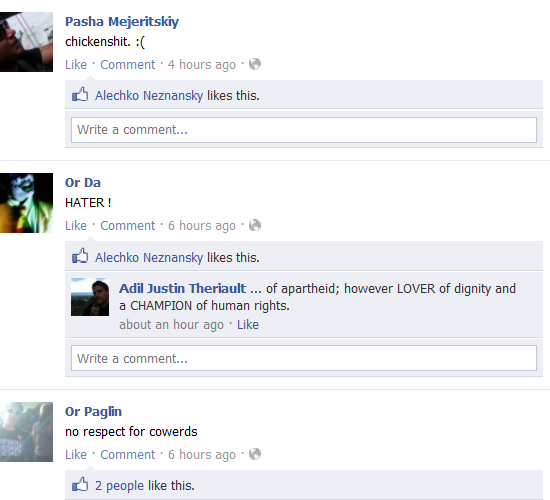 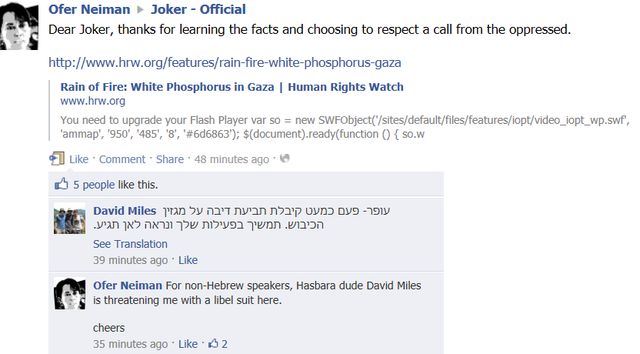 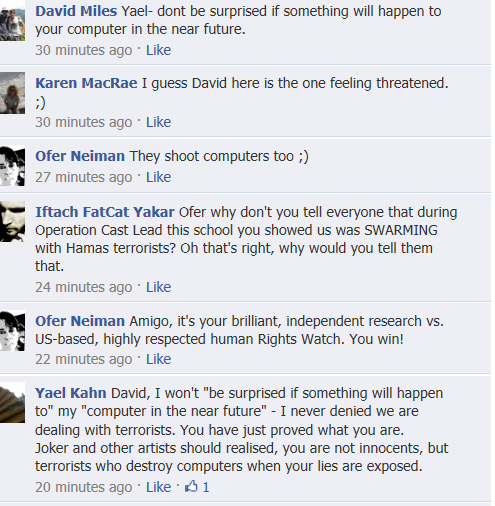 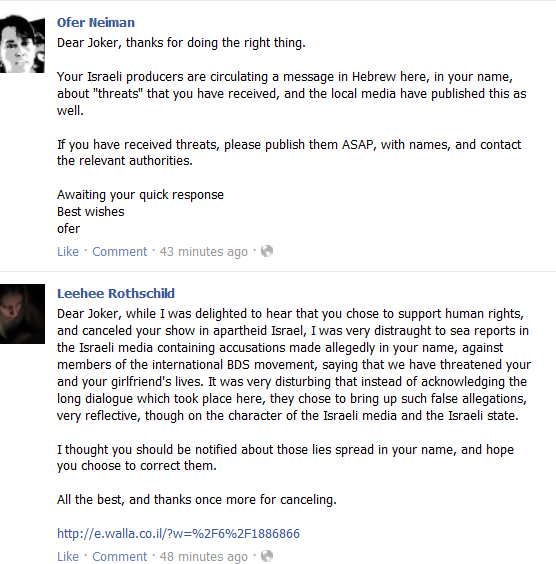 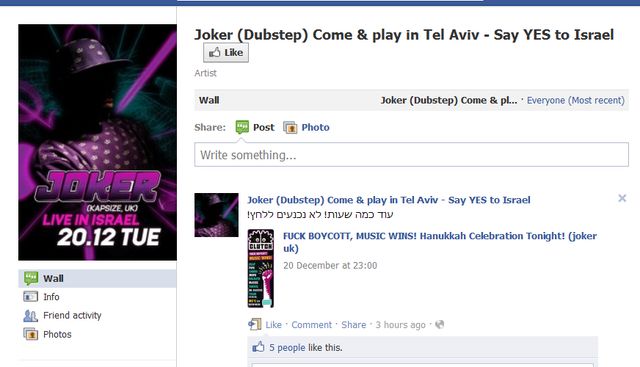 The 'party' goes on with a message to 'boycott' & without Joker

Much has been reported about the saga which in a nutshell, has anti-apartheid campaigners asking Joker to boycott his Tel Aviv show and respect the Palestinian Civil Society call to Boycott Israel and Israeli Apartheid sympathisers asking Joker to perform in Tel Aviv.

http://mondoweiss.net/2011/12/assailed-on-facebook-for-tel-aviv-gig-british-musician-joker-appears-to-back-out.html This narrative has been a twisty road, but the long & short of it is, Joker did not go.

From a spectators perspective, most interesting is the hasbara response to this all.
The anti-apartheid advocates created a face book page titled ‘Joker (Dubstep) Cancel your Tel Aviv show - Say NO to Apartheid Israel’.

https://www.facebook.com/pages/Joker-Dubstep-Cancel-your-Tel-Aviv-show-Say-NO-to-Apartheid-Israel/192297827530142 A link to this page was posted on Jokers official fan page

https://www.facebook.com/jokerofficialpage to which the Joker responded by asking fans if it was right for him to go?

The hasbara social networking machine kicked off by asserting that Israel is not an apartheid state and eluding to soothing, seductive & flattering words to Joker, asking him to perform, saying that music & politics should be kept separate & that music is the key to world peace.

Anti-apartheid fans disagreed, describing to Joker with evidenced reason that music does not transcend apartheid. Examples included the musical boycott of Apartheid South Africa, observed by musicians as a tool to end South African Apartheid. They provided quotes for example, Reggae DJ the Admiral, a member of South African Artists Against Apartheid who said “Calling Israel an Apartheid state is legitimate because Israel practices Apartheid. The boycott of such an oppressive regime should be supported as it was in our own Anti-Apartheid freedom struggle."

http://www.middleeastmonitor.org.uk/news/africa/2580-south-african-advertising-and-media-watchdog-rules-that-israel-can-be-called-an-qapartheidq-state ; and quotes from key personalities who have experience of living under such regimes like Arch Bishop Desmond Tutu, Alice Walker & Nelson Mandela.

A video link to a recent rally titled ‘Israeli Jewish hate rally against Africans in Tel Aviv’ was posted. This rally is addressed by Michael Ben-Ari, a member of the Israeli Knesset who praises the Mayor of Eilat, [as provided by subtitles] “who is doing a great job with the Africans there. I only wish we did the same here in Tel Aviv! He doesn’t allow them to attend school, he restricts their movements. He knows what to do”. This is also being done to Palestinians under Israeli Apartheid.

Anti-apartheid fans submitted that the issue of the ‘existence of Israeli Apartheid’ is no longer in question, further to recent findings by the Russell Tribunal session held in South Africa (November 2011) who found the entire state of Israel to be guilty of the crimes of Apartheid and Persecution.

Hasbara diplomacy included statements that Palestine never existed, that there is a biblical God given right to Israel & suggestions made towards the holocaust, as if the very real brutality experienced by those who suffered this tragedy & loss, can somehow rebut or allow for the existence of Israeli Apartheid? A video by Norman Finklestein was posted, where he said "My late father was in Auschwitz, my late mother was in a concentration camp, every single member of my family on both sides was exterminated, both my parents were in the Warsaw ghetto uprising and it is precisely and exactly because of the lessons my parents taught me that I will not be silenced when Israel commits its crimes against the Palestinians and I consider nothing more despicable then to use their suffering and their martyrdom to try and justify the torture, the brutalisation, the demolition of homes that Israel daily commits against the Palestinians"

A quote by Ghandi was posted, personally, when I hear hasbara talk of biblical rights I am reminded of this quote by Ghandi “As soon as we lose the moral basis, we cease to be religious. There is no such thing as religion over riding morality. Man, for instance, cannot be untruthful, cruel or incontinent & claim to have God on his side”. The BBC recently produced a documentary of interest on this topic of ‘biblical history’ called the ‘Bibles buried Secrets, Did King David’s Empire Exist?’

Joker posted a status update, 'ok after this crazy night finding out all this shit i have never know! no lie! i wont be going not because of every 1 telling not to but thats shit is MESSSSSSSEED UP’.

The hasbara teams’ diplomacy mutated to repulsive and perverse language targeted at Joker. This contrast of language to their earlier comments shed clarity to the void of integrity behind their speech. They worked to sew the psychological seed of doubt by posting that Joker had not cancelled his show and would be performing in Tel Aviv.
A key aspect of the hasbara campaign is to discredit individuals on a personal level. This was targeted at Joker with comments like ‘who is he anyway?’ Hasbara is known to create false Facebook accounts often in the name of Muslims and then post comments like ‘death to Israel’ in an attempt to justify Israeli Apartheid. They discredited & ridiculed the anti-apartheid campaign that asked Joker to cancel & said it was waste of time; yet they continued to post.

This entire performance was repeated by the hasbara team when it seemed that Joker may have changed his mind, before Joker again confirmed in a twitter feed on Monday night that he would not be going to Tel Aviv.

This vile, intimidating behaviour by the hasbara team was directed towards individuals asking Joker to cancel his performance and included racist photographs, insults and Islamaphobic comments suggesting that all who oppose Apartheid Israel are Muslims or Arabs & that Muslims/Arabs are terrorists.

These comments gave transparency to a clear lack of worldly education and cultural awareness of the Apartheid Israeli apologist. Indicating that the hasbara they fight so ardently with has also worked in equal measure on their own mind and their failure in being able to understand a broader, reasoned & developed global perspective.

A distinction between the two opposing campaigns was the target. Whilst Anti-Apartheid fans largely focused on informing Joker and providing credible evidence of the reality of Israeli Apartheid, the hasbara campaign focused on a broad spectrum to victimise, insult & threaten individuals posting against Israeli Apartheid. This makes plainer the absence of a logical & credible foundation to their political stance. The object of this tactic seems to be to silence the dissenting voice.

In pursuit of this, the Israeli apologist often goes to great effort to report people to Facebook for comments made, or if people are using an unreal name (many do), all in an attempt to get their Facebook accounts disabled. Threats were also made to break an Anti-Apartheid campaigner’s computer and to sue another for libel (as they lived in Israel).

My question to the Israeli Apartheid apologists is - Are the words they (Anti-Apartheid campaigners) say so credible, that you behave in this way and your crimes so despicable, that you must silence the same at all cost?

A further aspect of hasbara is denial, not just of the obvious but also to deny the value of an anti-Israeli Apartheid campaign. In this instance denial included posts suggesting that Joker wasn’t even scheduled to perform in Tel Aviv.

The saga now stands with the hasbara machine on a fall-back position, issuing a statement in the Israeli press on Monday that Jokers decision not to attend Tel Aviv was made directly because of threats against him and his girlfriend. Anti- Apartheid activists have asked Joker to confirm whether this is true, so far, Joker has not been forthcoming.

This has campaign has served to unite a global solidarity response against Israeli Apartheid, informed & raised awareness to those who previously had no or little exposure to the reality of Israeli Apartheid and the global peoples movement to Boycott, Divest from & Sanction (BDS) Israel until there is an end to Israeli Apartheid (see link for precise BDS demands) www.bdsmovement.net

Respect & thanks to Joker, it could not have been an easy decision but he made it.
Asalam Ulaikum, Peace be upon you.