English Defence League leader Tommy Robinson was attacked in Luton. Photos have emerged of his face after the beating, showing his face covered in cuts, lumps and bruises. However, there is some doubt over who the perpetrators of the attack were.

The Gates of Vienna blog carries a report that blames “Pakistani youths;

He was out driving, when he saw a car similar to his wife’s, driven by a blond white girl. The other car flashed its lights so Tommy pulled over.

A group of Pakistani youths wearing knuckle dusters poured out. Tommy was knocked out pretty quickly, and they gave him a good kicking.

He looks pretty beaten up, but no bones were broken, and no eyes or teeth are missing. He had a brain scan this morning. We don’t know the results yet.

He has spoken to The Sun, who asked whether he had called the police. Tommy said there was no point, as a racial attack on a white guy was of no interest to them.

Tommy has apparently since then reported that the gang were shouting “Allah Akhbar” and “Merry Christmas Tommy.” The blog states that they “want Tommy to go to the police,” because if they don’t act upon this, it is “yet more evidence that there is a two-tier system of justice in England.”

This story has been reported faithfully by the EDL’s new political bed-warmers, the British Freedom Party. They add that “our thoughts are with Tommy and his family during this tough time, a time which should be happy but has been devastated by thuggish invaders who would like to see Christmas eradicated from Britain.” 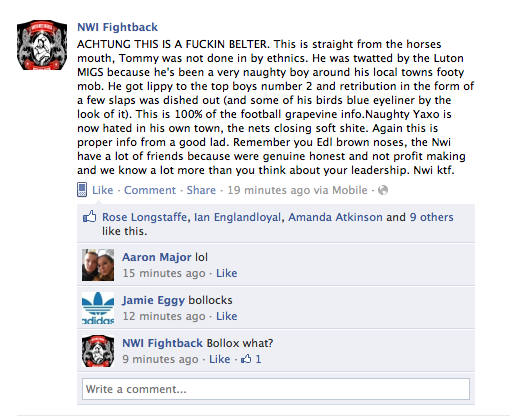 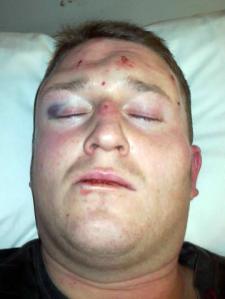 The MIGs, for those who don’t know, are the Luton Town football hooligan firm. It is from their infamous former leader that Tommy Robinson – real name Stephen Lennon – takes his alias. The MIGs also have links with the EDL dating back to its foundation, due to the group’s roots in football hooliganism.

So which is the true story? Both have some degree of credibility as well as room for doubt, but ultimately it is the word of one group of fascists against that of another at this moment in time. Either way, what it means is that the leader of the EDL has been laid up – for some time, given reports that he has “bruising of the brain” – and there will no doubt be repercussions. Revenge attacks on Asian youths by angry EDL supporters, or clashes between rival gangs of thugs. Possibly both.

In the meantime, our thoughts should be with Tommy. As the man who reinvigorated street fascism, inspiring a new generation of goons to go on the rampage against Asians and Muslims, it really couldn’t have happened to a more deserving person.