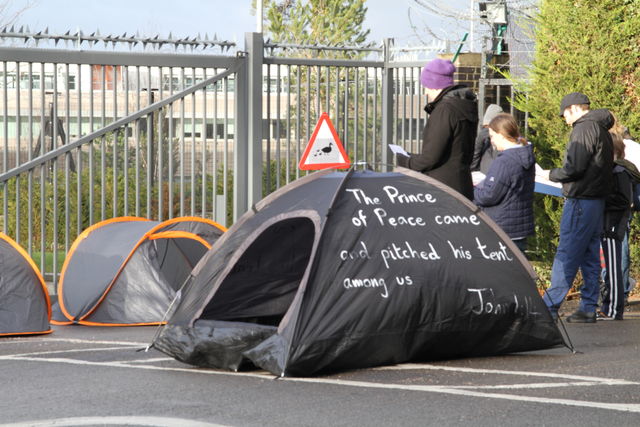 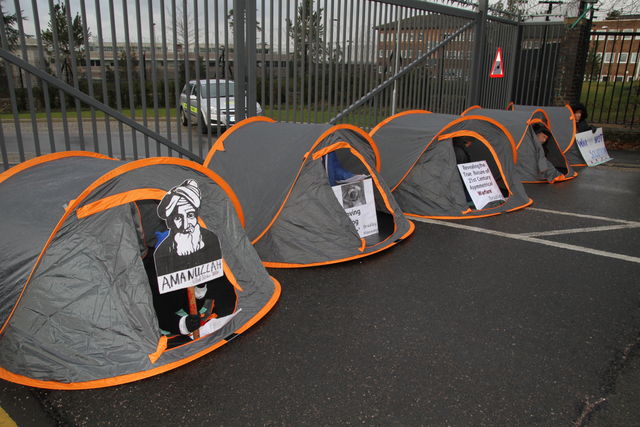 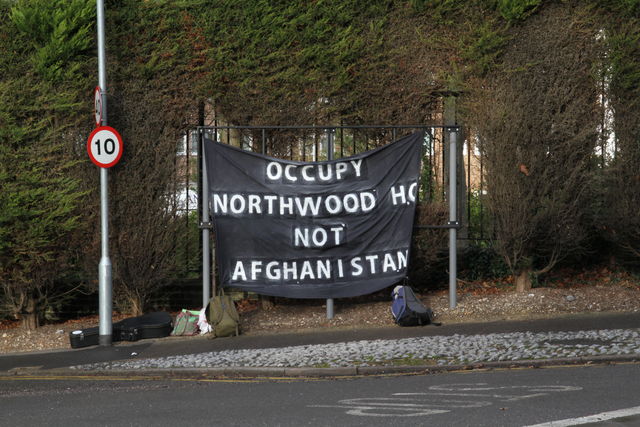 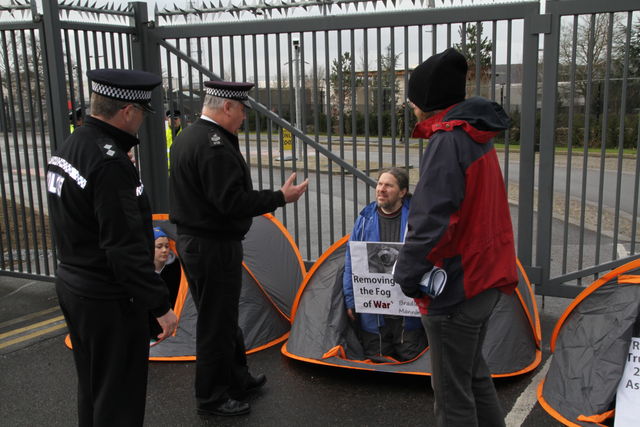 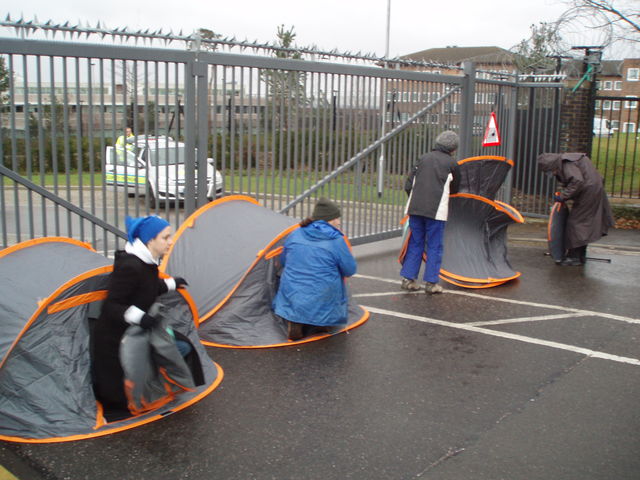 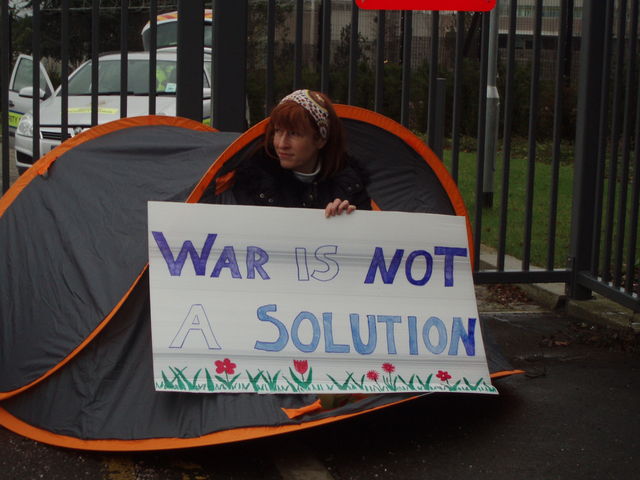 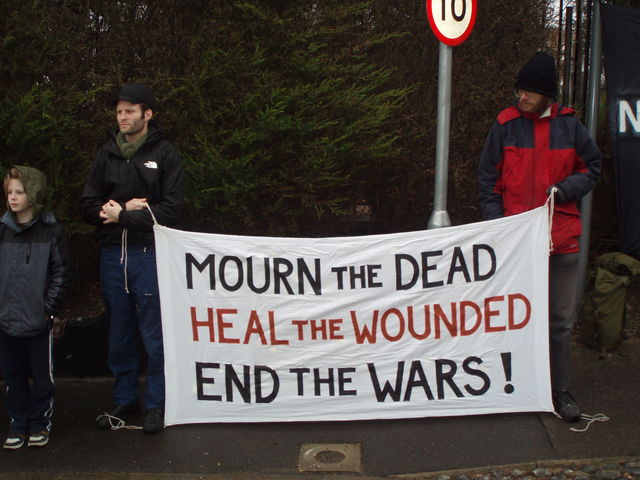 Thursday Dec 29 2011
16 Catholic Workers closed and occupied the Main Entrance of Northwood Military Headquarters. Scott and Maria Albrecht, Henrietta Cullinan, John Lynes and Rachel Wood pitched tents, knelt and prayed in front of the main gate for 2 hour while others vigiled holding signs. One tent had the words, “The Prince of Peace pitched his tent among us” John 1:14. A sign said, “War is not a Solution” which is a direct message from the Young Afghan Peace Volunteers and another Pvt. Bradley Manning’s Quote, “Exposing the true nature of 21st Century asymmetrical Warfare”. A banner stating, “Occupy Northwood HQ not Afghanistan” was hung on the fence. The gate remained closed for the duration of the occupation.

The Catholic Worker group had gathered to mark the Feast of Holy Innocents; when Catholics remember the children murdered by king Herod in his search for the infant Jesus. Catholic Workers make the connection with the powerful who continue to kill the innocents today in war, specifically Afghanistan. Northwood HQ is the command and control center for British forces in Afghanistan, all joint forces and NATO operations abroad. Northwood HQ has recently experienced a £1.2 billion building project; these funds could have otherwise benefited the community.

A group statement said, “At a time when government cuts are affecting innocent children, pensioners, teachers, the sick and refugees the last thing we need to be doing is to continue spending billions on warfare. Human lives are the deepest cost. The government complains about a few tents occupying a small square outside St. Paul’s cathedral while we’ve sent thousands of soldiers to occupy other people’s countries and destroy their lives. This government needs to get its priorities right”.

Frankie Hughes’ eyes glowed as red as her hair after she ripped duck
tape off her lips to talk to reporters on Thursday afternoon — not
long before she was arrested.

Frankie, 14, was one of about 12 Occupy protesters blocking the
entrances to the Iowa Democratic Party headquarters in Des Moines.

“I was here to try to get a message out to Obama that he’s not been
listening to us, and we have demands that need to be met. I am here so
that everybody knows that there are children out there dying,” Frankie
said after her arrest.

The Callanan Middle School student has been arrested three or four
times — she isn’t sure — on charges related to protesting. She was
released to her father, Dan Hughes, less than 20 minutes after her
arrest. Her mother, Renee Espeland, 50, was also arrested Thursday.

“I’m representing children whose parents have died in war, hungry
children, sick children who can’t afford health care, children whose
parents have PTSD and children and people who don’t have a voice
anymore,” Frankie said. “The government was created to protect the
people, but how is that possible when what the people want isn’t
heard?”

Dan Hughes said he was proud of his daughter. “I will let anybody
follow their heart as long as it’s an honorable thing.”

Des Moines Police Sgt. Chris Scott said Frankie will be issued a
citation for criminal trespassing. Officers decided it was in her best
interest to release Frankie to her father.

“If there was an issue that required a detention, then it would have
been to the Polk County Juvenile Detention Center, but fortunately,
she went peaceful, like everybody else did,” Scott said.

Frankie said that she gets good grades and emphasized that protesting
wasn’t a waste of time.

“This is more productive than sitting home, watching TV,” she said.
---

Dec 28, 2011 DM Reg - Letter to the Editor
"Discourse was at risk well before protesters" by Frank Cordaro DMCW

The Register’s headline (Dec. 22) says, “Protesters’ Tactics Put
Discourse at Risk.” Really? As one who has participated in
mic-checking candidates, I know that our political discourse was
already at risk before any of our mic checks.

In these times to exercise your free speech rights, sometimes you’ve
got to be rude to give voice to the concerns of the 99 percent over
the 1 percent corporate elites and the bought, paid and scripted
political discourse coming from both the Republican and Democratic
parties
-----