This Saturday (7 January) the weekend before the tenth anniversary of the opening of the illegal US military prison camp at Guantánamo Bay, on 11 January 2002, a public rally is to be held at Trafalgar Square (North Terrace, outside the National Gallery), organised by the London Guantánamo Campaign (LGC), Save Shaker Aamer Campaign (SSAC), Stop the War Coalition (StWC) and Campaign for Nuclear Disarmament (CND) [1]. 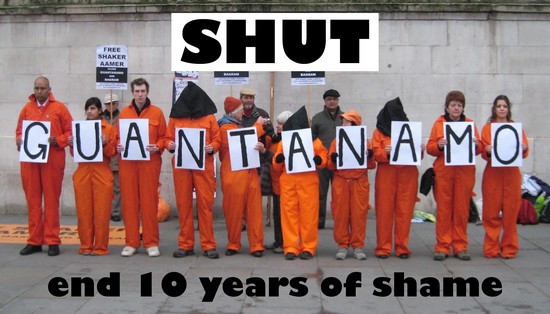 Aisha Maniar, from the LGC, said:

“Ten years of Guantánamo Bay are ten years of wasted opportunities to close down this notorious symbol of lawlessness and injustice in our time.

“President Obama has completed his U-turn on earlier pledges to close Guantánamo and end the discredited military commissions with his recent signing into law of the National Defense Authorization Act, perpetuating the regime of arbitrary detention without charge or trial.

“The United States and its allies must share responsibility for the closure of Guantánamo Bay: the UK government must step up its efforts to secure the return of British resident Shaker Aamer [3] and also offer a safe home to former British resident Ahmed Belbacha [4]. Other European Union states must also step up their efforts to help close Guantánamo Bay and take concrete action to put an end to this “shame”[5].

“We will nonetheless keep up the pressure on governments to take firm action and to seek justice for the prisoners held at Guantánamo.”

3. Shaker Aamer was cleared for release by the US military in 2007, and by Obama’s administration in 2009. He claims to have been tortured repeatedly during his time in US custody, on one occasion in the presence of a British intelligence agent. He has a British wife and four children living in Battersea, south London. He has never met his youngest son, who is almost 10 years old. Former Prime Minister Gordon Brown sought Mr Aamer’s release in August 2007, along with four other British residents then held at Guantánamo Bay , the last of whom, Binyam Mohamed, was released in February 2009. Mr Aamer’s lawyer, Clive Stafford-Smith, has recently expressed grave concerns for his physical and mental health.

4. Ahmed Belbacha is an Algerian national who lived in Bournemouth from 1999 to 2001. He was cleared for release by the US military in 2007. Mr Belbacha fears for his life if forcibly returned to Algeria (an injunction currently prevents this), and remains at Guantánamo awaiting the offer of a safe home.