No Justice for Kingsnorth Fitwatchers

Fitwatch regularly get asked what happened to the cops who assaulted members of the group during Kingsnorth climate camp. The case received a large amount of publicity when it was front page of the Guardian in June 2009, and many thousands of people viewed the footage of officers using excessive force against three fitwatchers who were trying to identify officers who weren’t displaying their numbers.

However, until recently, there hasn’t been much to report. The IPCC and West Yorkshire Police (WYP) waddled their way through their initial investigation and subsequent appeals, and despite overwhelming evidence, found most of the behaviour and arrests acceptable behaviour aside from a couple of minor caveats such as the cops not identifying themselves being “regrettable” rather than intentional. PC Fisher, the cop who made headline news through using a stranglehold and excessively pressure pointing one Fitwatcher, was the only officer who complaints were upheld against. However, even the findings against him exonerate him of deliberately intending harm or injury through his use of force. 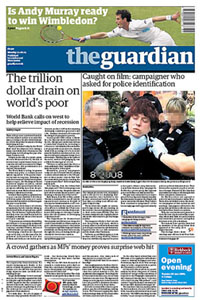 Given the usual standards of police investigations, this was a victory in itself; a victory only achieved because of the publicity of the case and the video footage which simply couldn’t be ignored. Although the file was passed to the CPS, given the elapsed time, he could not be prosecuted for assault, and misconduct proceedings were recommended against him.

In September 2011, these proceedings finally took place, and whilst he was found to have used excessive force with his behaviour falling below that expected of a police officer, it was decided to take no action against him given so much time had passed since the original incident, despite 27 months of this delay being due to the complaint investigation.

It gets worse. PC Fisher subsequently appealed the decision, won, and is now working as a Detective Constable (DC), which whilst not a promotion in rank, could certainly be seen as a promotion in terms of career prospects. The nature of police misconduct proceedings and appeals means he would not only have had to prove his actions were acceptable, but also that no reasonable person could have reached the conclusion of the first hearing.

After two and a half years of complaints procedures, it has been proven once again that the systems we have to investigate the police are useless organisations with no means or will to implement the outcomes of the investigations it conducts. Despite the findings, despite the overwhelming evidence, Fisher and all the other cops involved in the incident have emerged unscathed.

The case is far from over. All the fitwatchers are still pursuing civil claims against the police for their arrest and subsequent imprisonment. Furthermore, leave is being sought to bring a Judicial Review challenging the misconduct appeal decision.

Moreover, this is yet another case showing the utter ineffectiveness of the IPCC and other bodies to hold the police to account for their actions. It shows, once again, the eagerness and complicity of the police to excuse, justify and get away with violence. The case, whilst sickening, cannot be shocking when we have seen time and time again the police literally getting away with murder.

We cannot rely on the current legal systems to deliver justice, and we cannot rely on it to challenge police violence and criminality. The times we achieve this is when we take direct action on the streets – whether this is monitoring a stop and search, blocking a police camera or fighting back against police violence. We challenge the police when we refuse to be passive, when we refuse to accept their control, and when we act in solidarity with each other.