On Saturday 7 January, the weekend before the tenth anniversary of the opening of the illegal prison camp at Guantánamo Bay, over 200 people from London and other parts of the UK converged outside the National Gallery in Trafalgar Square to mark this unfortunate day in history and to stand in solidarity with the 171 prisoners who remain there. Organised by the London Guantánamo Campaign (LGC), the Save Shaker Aamer Campaign (SSAC), the Stop the War Coalition (StWC) and the Campaign for Nuclear Disarmament (CND) 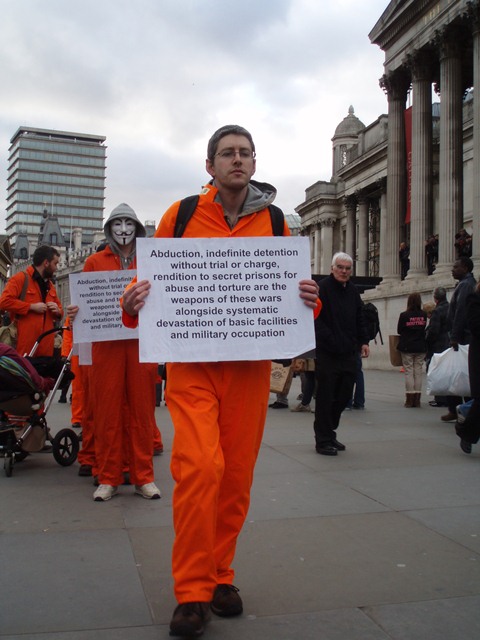 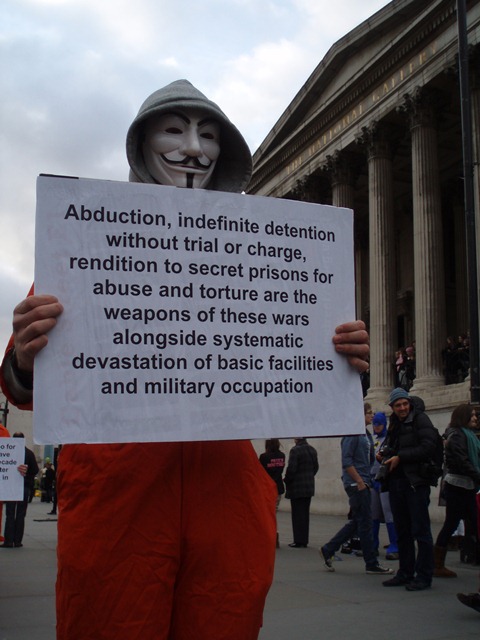 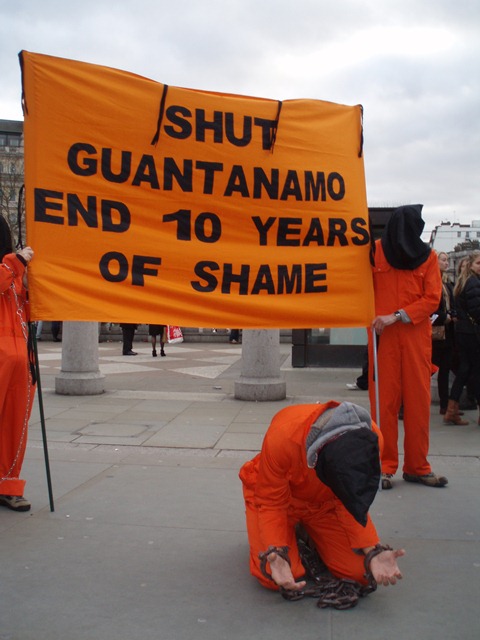 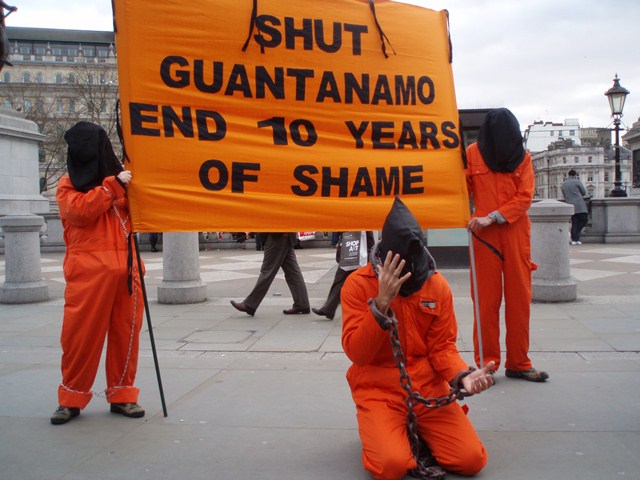 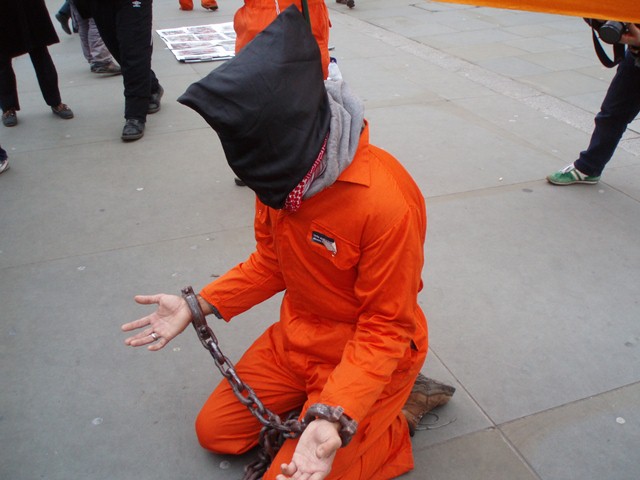 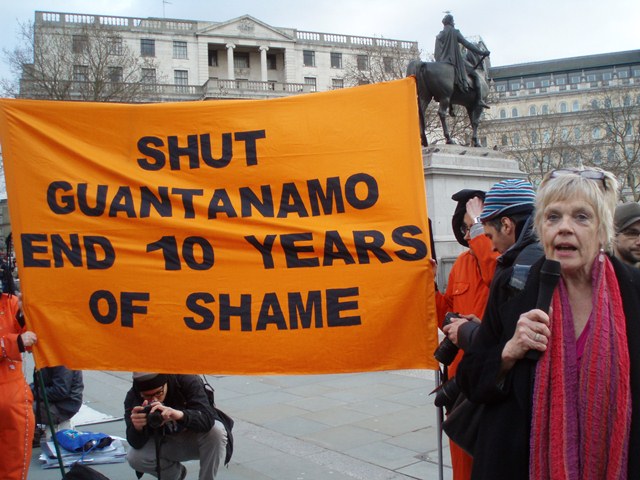 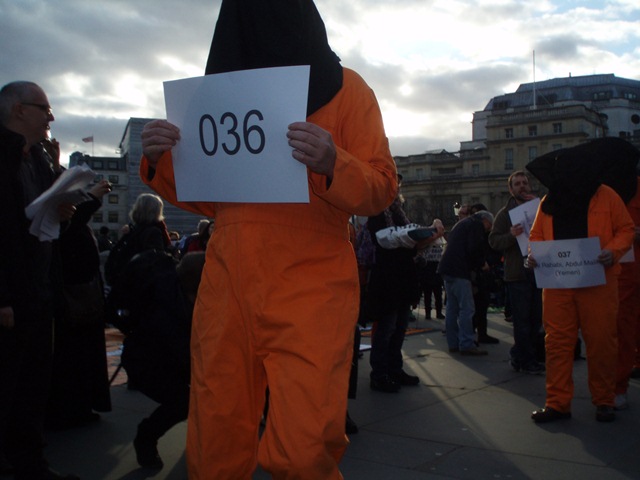 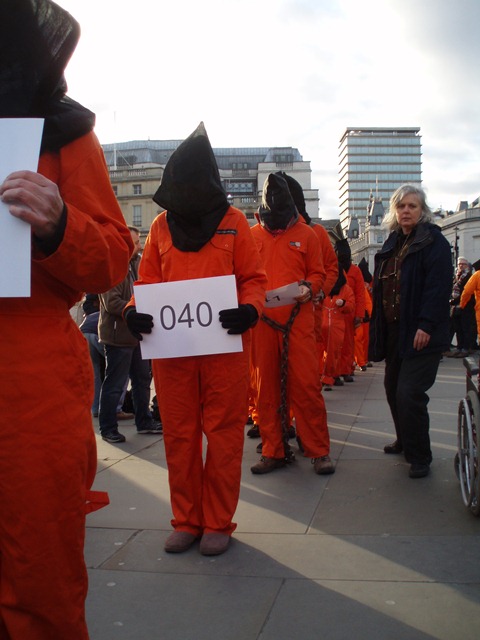 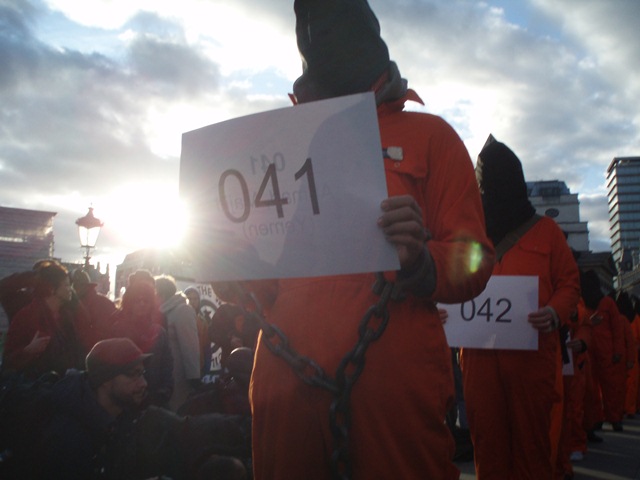 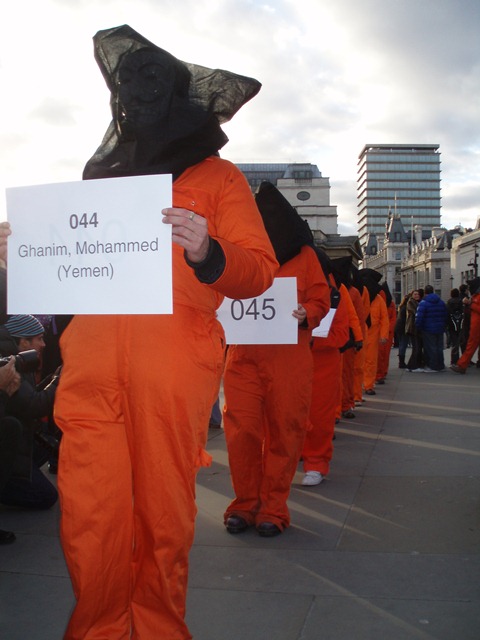 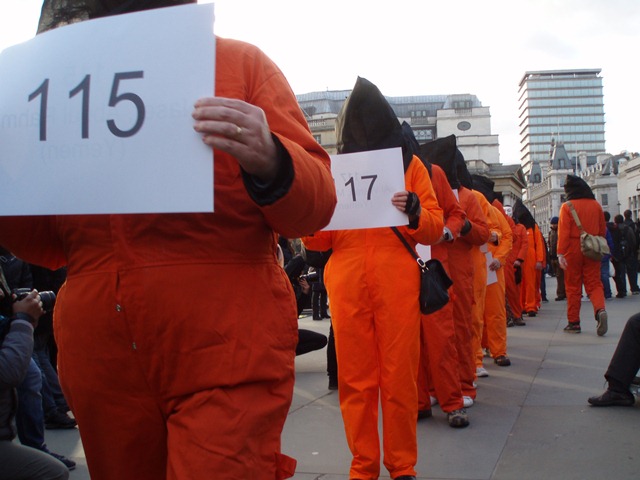 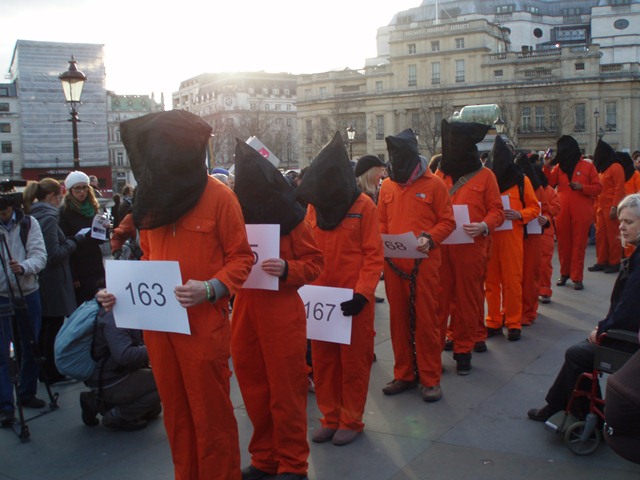 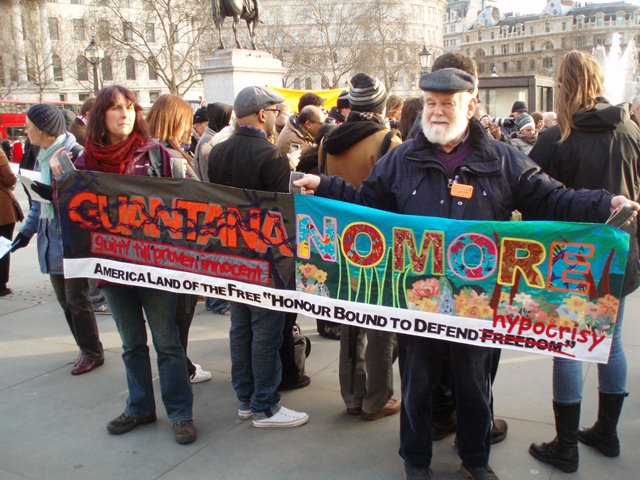 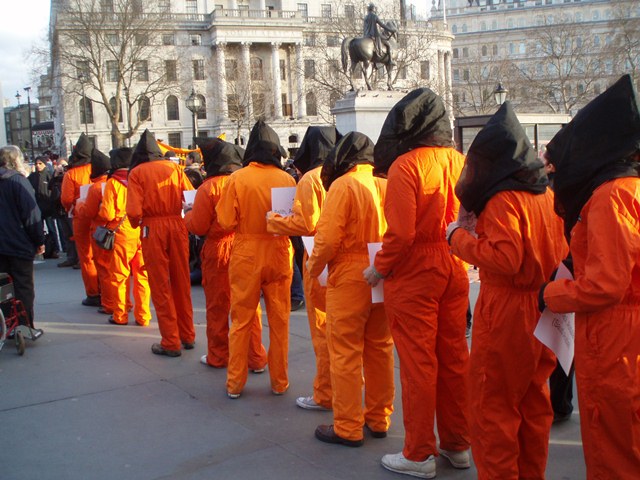 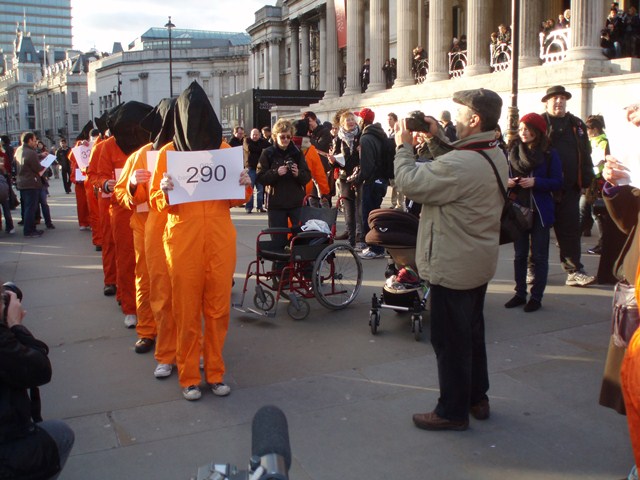 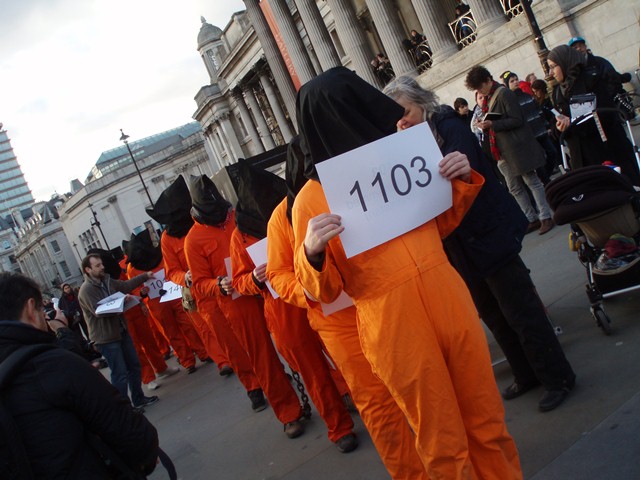 On Saturday 7 January, the weekend before the tenth anniversary of the opening of the illegal prison camp at Guantánamo Bay, over 200 people from London and other parts of the UK converged outside the National Gallery in Trafalgar Square to mark this unfortunate day in history and to stand in solidarity with the 171 prisoners who remain there. Organised by the London Guantánamo Campaign (LGC), the Save Shaker Aamer Campaign (SSAC), the Stop the War Coalition (StWC) and the Campaign for Nuclear Disarmament (CND), the rally started with journalist Victoria Brittain reading a couple of poems written by former detainees on their experiences at the prison and their feelings on the injustice they have faced.

Leading human rights solicitor Louise Christian, who represented several of the British men who have been held there, expressed her shock that there are still 171 prisoners a decade on. She described the moment when her clients were reunited with their families as one of the most moving experiences in her legal career. Ms Christian criticised the British government's failure to reunite British resident Shaker Aamer with his family in south London. She said that this situation cannot go on; it sends a signal to the world that the US and the UK governments do not care. It is a "shame on us all" that Guantánamo is still open and we need to do everything we can to get it closed.

London MEPs Baroness Sarah Ludford (Liberal Democrat) and Jean Lambert (Green) provided political support to the campaigners. Ms Ludford described the failure to close Guantánamo "a complete disgrace" and a "disappointment". She said that it was disappointing that there was still no full truth over European collusion in extraordinary rendition and torture; this involvement undermines the European Union principles of democracy, human rights and respect for the rule of law. She called for accountability as a necessary first step to "cleaning the stables before we can say "never again" as Europe has done in its past history". Ms Ludford and Ms Lambert asserted their commitment to continue pushing this issue at the European level to seek accountability for European involvement and have member states accept prisoners. The two MEPs will jointly co-host a meeting at the European Parliament later this month to revisit and update work on European accountability in this matter. Ms Lambert also mentioned the "dangerous proposals" currently being put forth in a government green paper on justice and security by the Home Office which would effectively allow provisions for the use of secret evidence to be rolled out in all civil cases and prevent the cases for disclosure in collusion brought by former Guantánamo prisoners. A statement was also read out on behalf of Green MP Caroline Lucas, who was unable to attend (statement below).

Both MEPs expressed their solidarity with the family of Shaker Aamer and called on the government to take immediate action over his case to bring him back to his family in London. Other speakers, including Kate Hudson from the CND, Aaron Kiely from the National Union of Students (NUS), Steve Bell from the Communication Workers Union (CWU). Other speakers included Lindsey German from the StWC, Joy Hurcombe from the SSAC and Shaun Brown from the LGC. Criticism was also made of the Obama administration's recent approval of the National Defense Authorization Act (NDAA) 2012, with Steve Bell describing it as "extending the Guantánamo principle to US citizens", Jean Lambert called it a "rewriting of international law" and Shaun Brown said it "made indefinite detention lawful".

Cortney Busch from the human rights NGO Reprieve said that the NDAA meant that prisoners may never have the chance to go home to their families. She described being held for ten years without charge or trial in arbitrary conditions as tantamount to torture. She urged the public to keep putting the pressure on governments and to write to the prisoners to keep their spirits up. Lighter entertainment was provider by poet Pete The Temp.

Halfway through the speeches, the LGC organised a visual display to represent the 171 prisoners still held at the prison. Volunteers played the role of prisoners: dressed in orange jumpsuits and black hoods, they held up placards with the prisoners' numbers on them and stepped forward as the names behind the numbers were read out. This part of the action was both visually stunning and a poignant reminder of the very real people caught up in this tragedy.

Ten years on with no prospect of closure in sight, the campaign to close Guantánamo is not over either. In spite of the setback posed by recent legal changes in the United States, the almost impossibility for prisoners to leave the prison alive at present and the insistence on secrecy by governments the world over in their collusion, there have also been positive revelations over the past year, such as the court case in the United States revealing corporate involvement in torture flights, including by a company owned by Liverpool FC co-owner Philip Morse (http://reprieve.org.uk/press/2011_08_31_rendition_documents/) and revelations by Human Rights Watch about British collusion with the US in rendition to Libya (http://www.hrw.org/news/2011/09/08/usuk-documents-reveal-libya-rendition-details), among others. The fight for justice must and will go on. It is clear that over the past ten years, politicians across the world have largely failed to provide more than verbal assurances and condemnation. With a similar action held in Canada on the same date and actions ongoing in the United States and more planned for this coming week all over the world, it is up to ordinary people to say enough is enough.

Actions you can take:

The notorious illegal prison camp and potent symbol of injustice that is Guantánamo Bay hits ten on Wednesday 11 January 2012. Opened in 2002 to hold prisoners captured in Afghanistan, the regime at Guantánamo Bay has somehow managed consistently to avoid falling within established norms and practices of international law, such as complying with the Geneva Convention, the UN Convention Against Torture and even the United States constitution.

In spite of widespread international condemnation - even Tony Blair called it an "anomaly" and a European commissioner recently called the failure to close it a "shame" - this has not translated into the closure of the facility or the safe release of prisoners; a decade on, 171 prisoners remain, most held for this entire period without charge or trial.

President Obama was once among those critics dubbing it a "misguided experiment"; a promise to close Guantánamo Bay and bring the US back into line with international law featured prominently in his presidential election campaign in 2008. Having won the presidency, one of his first pledges was signed to close Guantánamo by January 2010. That clearly did not happen and during his first term as president, Barack Obama has completely reneged on all the promises he made with his administration reinstating military tribunals, preventing prisoner transfers (hardly any prisoners have been released over the past three years) and most recently, he marked Guantánamo's first decade by signing the National Defense Authorization Act 2012, a defence spending bill with provisions to perpetuate the regime of detention without charge and trial and keep Guantánamo open for many years to come, as well as the possibility of new inmates. In addition to this, in Obama's first term, Bagram prison in Afghanistan, where most of the prisoners were first held and abused before being taken to Guantánamo over ten years ago, has quadrupled in size.

The British government maintains that it has done more than its European counterparts by ensuring the safe release and return to the UK of over a dozen British nationals and residents over the past decade. Nonetheless, and despite official denial otherwise, the government was aware of the treatment of British prisoners at Bagram and their transfer to Guantánamo before it even happened. Two men with ties to Britain remain at Guantánamo Bay: Shaker Aamer, a 46-year old Saudi national who lived with his British wife and children in London. Although the government called for his return five years ago, it is unclear why he remains at Guantánamo after so long, having never been charged or tried. http://reprieve.org.uk/cases/shakeraamer

The LGC also maintains that the British government should seek the return to the UK of former British resident Ahmed Belbacha, an Algerian national who lived in Bournemouth from 1999 to 2001. He was cleared for release by the US military in 2007. Mr Belbacha fears for his life if forcibly returned to Algeria (an injunction currently prevents this), and remains at Guantánamo awaiting the offer of a safe home.

Statement by Caroline Lucas MP: I am sorry that I cannot be with you today to mark the 10 shameful years that Shaker Aamer has been detained - unlawfully - in Guantanamo Bay.

His incarceration and that of others - present and past - remains a stain on the US's reputation and is a grievous abuse of precious human rights.

We know from recent reports that Shaker's health is deteriorating and that he is ‘gradually dying in Guantanamo Bay'. For Shaker to die in the illegal custody of the United States would be an unspeakable travesty. We must not let this happen.

It would also seriously affect our country's reputation of standing up for its citizens abroad. That's why I have repeatedly called on the Foreign Secretary to increase efforts to secure Shaker's release - and to close down Guantanamo. William Hague has told me that he pressed Shaker's case with Hillary Clinton most recently on December 12th and that UK and US officials hold regular discussions on Mr Aamer's case, both in London and from the British embassy in Washington. But every single day that passes is a day too long as far as Shaker's family and friends are concerned - as the 10th anniversary of his detention approaches we must convince the Government to act with even greater urgency.

The Foreign Secretary also says that Shaker's release remains a matter for the US authorities. That is true enough. But let's not forget that so called special relationship Britain is meant to enjoy with the US. And let's remember Barak Obama's promise to the world that he would make the closure of Guantanamo Bay a priority - his pledge to do the right thing. The UK has a responsibility to make sure Shaker is not forgotten and to hold the US fully to account for its treatment of UK residents and citizens - and that is very much a matter for the UK authorities.

The Green Party wants to applaud the Save Shaker Aamer campaign, the London Guantanamo Campaign and others for their tireless efforts to keep this case in the public eye and on the political agenda. Please be assured of our ongoing support and commitment to bringing Shaker home and to making sure that others do not suffer the same fate in future.

Media on the action: