Former Prime Minister Margaret Thatcher has passed away at aged 86.

It is believed that former UK Prime minister and Conservative party leader Margaret Thatcher has passed away.

According to close sources she had been very ill and bed ridden for at least ten days. 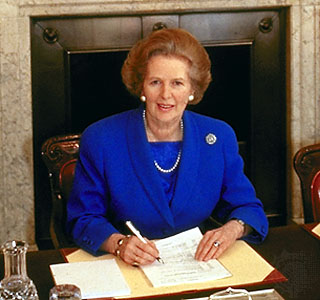 Thatcher was found unconcious at her London residence by a close aide.

Her son Sir Mark Thatcher and his wife Sarah were immediately alerted and arrived within the hour.

Her death was confirmed by her doctor at approximately 19:50 PM.

It has been widely reported in the recent past that Baroness Thatcher had been suffering from senile dementia as well as other health complications.

Baroness Thatcher had also been suffering from severe polymyalgia rheumatica and pneumonia - and even at this very early stage it has been speculated as having being the primary cause of her death.

Thatcher is survived by her son Mark and daughter Carol.

This story was also posted on Indymedia Ireland. It needs confirmation because we have had fake stories about other people dying in the past year or two.

Best removed until proven because these types of possibly fake stories are designed to throw mud on the reputation of Indymedia and discredit it.