Eire: Guantanamo Protest at US Embassy In Ballsbridge on 10th Anniversary

One Guantanamo suit, a letter to Ambassador Dan Rooney, a few acknowledgements, and in far away Guantanamo a hunger strike protesting a monstrous outrage against justice 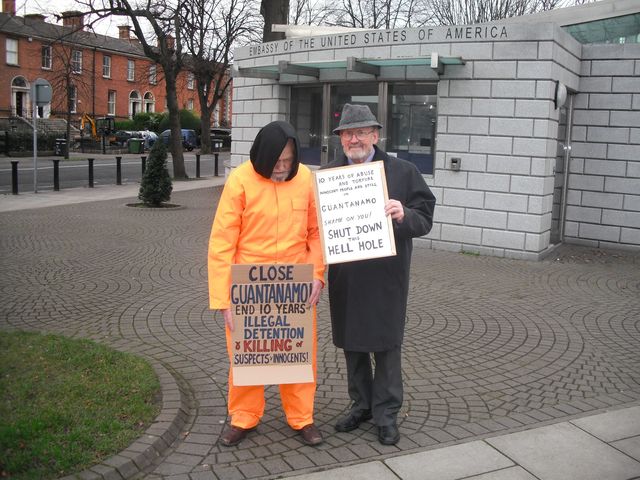 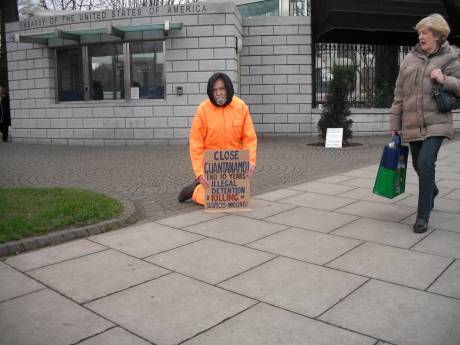 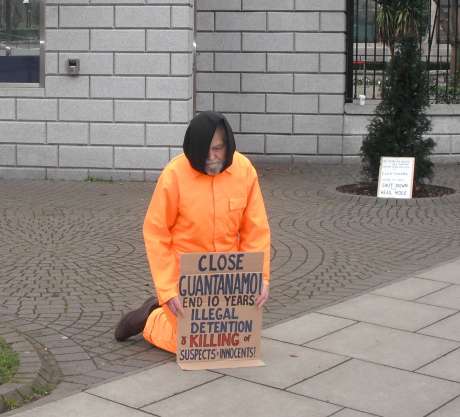 On Wednesday 11 January 2012, Colm Roddy and I turned up outside the US Embassy in Ballsbridge to make our little protest on the tenth anniversary of Guantanamo prison opening by the US Government. . There were only two of us at this particular time - we stayed from 12.30pm to 2 pm. The ever ready Colm was suitably dressed in Guantanamo outfit, I was not. Colm knelt for about an hour on the street facing the Embassy

There was little reaction from the public who saw us, one man stopped for a minute, another gave the thumbs up signal, one young woman said Thank you. A boy ran across the road to get an explanation and shouted it out to his ten companions.

By a stroke of luck the Ambassador, Dan Rooney, was eating a snack and, as he returned to te Embassy flanked by two men, he walked straight towards me. As he finished reading my sign, I said "Mr Rooney, I have a letter here for you". He turned his head to one side and as one of the men moved toward me I said "Will you accept this letter from me?" handing the letter in his direction. He told the second man to take it.. And so it was delivered.

We are protesting at the United States Embassy today on the tenth anniversary of the opening of Guantanamo prison. President Obama gave a solemn undertaking to close it - why is it still open? The shame of the Bush era clings to your President and will take many years or decades to undo.

There were countless protests against Guantanamo prison throughout the US and the world today and possibly others in Ireland. A very dedicated group "Witness against Torture" are linked below.
Related Link: