WASHINGTON - Thirty-seven members of Witness Against Torture, a grassroots organization calling for the closure of the US detention facility in Guantanamo Bay, Cuba, were arrested in front of the White House around three o'clock this afternoon. Dressed in the iconic Guantanamo orange jumpsuits and black hoods and accompanied by a cage representing indefinite detention, the activists were warned to clear the sidewalk by National Park Police or risk arrest. After occupying the sidewalk for more than three hours, they were arrested one by one. 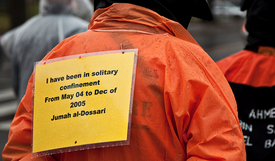 “We came to the White House because just eleven days ago, President Obama signed the National Defense Authorization Act. It is dead wrong,” says Leah Grady Sayvetz, an activist and college student form Ithaca, New York arrested this afternoon. “The NDAA makes Guantanamo near-permanent and expands detention powers just when this terrible and immoral detention apparatus should be being dismantled.”