On the 10th anniversary of the opening of Guantanimo Bay, the largest protest ever held in the US against this hellhole demanded that it be closed. Cold rain could not deter this protest, as unlike Guantanimo Bay nobody had to worry about being waterboarded. It is being estimated that 800 people may have been in the march to the Supreme Court

Video: The march to the Supreme Court and the speakers there -

former US Navy sailor based at Gitmo, discharged as a CO speaks out - mp3 1.6M

poem written by a Gitmo detainee is read out at the Supreme Court - mp3 5.6M

Most of the speeches from the Supreme Court, courtesy WSQT radio - mp3 15M 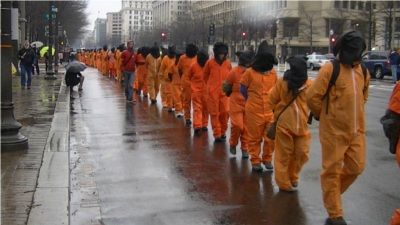 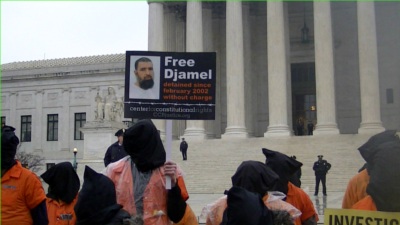 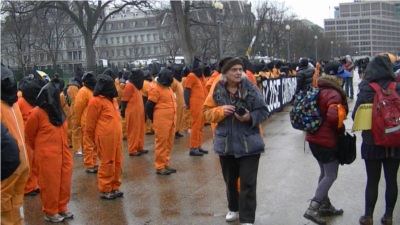 Occupy DC added their numbers to the existing ranks of antiwar protesters who have marched against Gunatanimo Bay every year on the 11th of January, the day the first prisoners arrived at Gitmo back in 2002.

The protest was so large that it had to divide into multiple elements going to multiple targets, as not everyone could fit at the Supreme Court. There were 171 marchers in orange jump suits and black hoods, the symbol of Guantanimo Bay and the "black" or secret prisons. These marchers went to the Supreme Court.

One speaker at the Supreme Court rally was a former US Navy sailor who was stationed at Guantanimo Bay. He was so horrified by what he saw that he requested and got a Conscientious Objector discharge, and now is speaking out against the prison there.Audio-his speech on 1-11-2012, same as above

Other marches went to Congress, the Department of Justice, and one may have returned to the White House. Each of these arms of government plus the Supreme Court are jointly responsible for the continued existance of Guantanimo Bay 10 years after it opened, and three years after Obama supposedly ordered it shut down