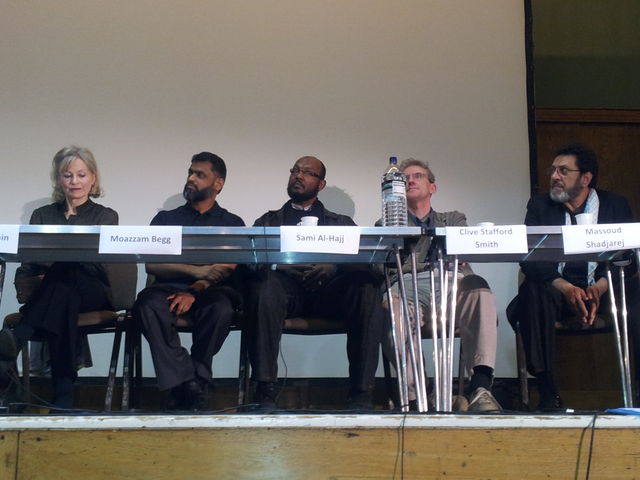 On 11th January 2012 at London’s Conway Hall, Cage Prisoners presented ‘Guantanamo Remembered: 10 Years’ since the first of nearly 800 prisoners were sent to the US military prison camp at Guantanamo Bay. Today 171 prisoners still remain in custody.

A video featuring discussions with Moazzam Beg, Clive Stafford Smith, Sami Al-Haji, Michael Ratner & Massoud Shadjareh highlights their experiences & efforts in working to close such detention centres, the impact it has upon detainees, the role of the U.K & U.S & how public activism is key in effecting their closure.

Former detainees touched briefly on the extent of the impact that detention without charge has had upon them and the difficulties they face attempting to integrate back into ‘usual’ life upon release. They shared the tremendous impact this has had upon their relationships and families stripped of loved ones and the loss suffered, especially in relation to nurturing their children.

Sami Al Haji, a Journalist for Aljazeera was released on 1st May 2008 after a long hunger strike “continuous until 480 days”. Upon release and arrival in his home country of Sudan, he was taken to hospital where he met his son who he last saw at age 18 months and who was now 8 years old. He explained that there is a problem to “get people to a third country, not to their country because the USA doesn’t allow for them to be released to their country, like Yemen people and other people, who if they return to their country, they lock them again”. He spoke of hope that Qatar may assist in this area as it recently accepted “3 Afghans”.

Moazzam Beg when asked “how many non-Muslims have been detained that you are campaigning for?” replied “In all honesty the answer would really be none…clearly you can look at Guantanamo, there are no non-Muslims held in Guantanamo and that should be very indicative of what the war on terror means”.

A key message emanating was that both the U.K government and the U.S Administration are not working to close Guantanamo and other such detention centres. Michael Ratner explained that whilst many prisoners have been cleared for release, they have not been released “due to a new law signed by President Obama on December 31st 2011, called the National Defence Authorisation Act” which effectively works to frustrate the release of detainees cleared for release.

Gareth Peirce delivered quotations from communications by U.K Government officials which proved that whilst they are telling the families of British citizens that they are doing all they can to secure the release of their loved ones; the reality is that they are not. She also confirmed that a new e-petition will shortly be launched on this issue which will require 100,000 signatures for it to be eligible for debate in the House of Commons.

Massoud Shadjare explained that recognition is required of a new procedure and concept introduced and he is urging people to campaign against it. “People are no longer being arrested and sent to detention centres. Instead “drones are being sent in to assassinate people on evidence similar to those accusations against the Guantanamo detainees and sometimes weaker accusations, just hearsay and not only assassinating individuals, they are assassinating their families, their loved ones, their neighbours and indeed people around them. It’s been reported that 75% of these attacks by drones target innocent people. I would say it’s not just 75% it’s actually 100% because none of these people have been taken to court or found guilty, or actually has even heard the accusations against them”.

Clive Stafford Smith said ‘‘we will win this battle it’s just a matter of when. How long it takes is defined but what you do... It’s the media, the court of public opinion here that will make a difference much more than the court of law, what’s killing those guys in Guantanamo is being forgotten, so don’t forget them”. He is urging everyone to do something to help close Guantanamo “what you can’t do is nothing”.

‘Guantanamo’ is a word that’s been circulating for a long while. Having recently watched interviews by released detainees and hearing them speak, it has hit home again. This is reality and not just images on a screen. Detainees are people like me with families like mine. It’s beyond me how they have faced being snatched from their lives and plunged into a life of routine torture, degradation, abuse, having their human rights violated and extinguished and all this purposely before a public arena in the name of patriotism, being displayed & held as the most dangerous element to humanity, their families victimised, isolated, yet not a charge heard against them. The government they entrusted with their welfare and worked to pay taxes for, are complicit in and promote the lies against them and the terror they endure. They are also the victims of the war of terror, a war perpetuated in the name of my safety and wellbeing. This is a crime against civilisation and humanity, this by the governments that work to bring democracy to countries they describe as ‘third world’.