For the first time, British government censors have banned a 24-hour news channel from British viewers. As of the afternoon, UK-time, 20th January 2012, viewers of Press TV, an avowedly anti-imperialist TV channel headquartered in Tehran, saw the words “Channel Unavailable” when tapping their clicker. And so the war on Iran by Britain, Israel and the U.S. continues using propaganda, proxy militants and asymmetric warfare. 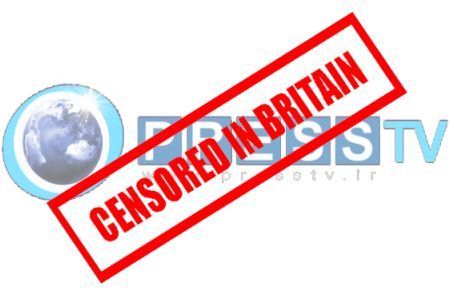 Censorship as a badge of honor?


For the first time, British government censors have banned a 24-hour news channel from British viewers. As of the afternoon, UK-time, 20th January 2012, viewers of Press TV, an avowedly anti-imperialist TV channel headquartered in Tehran and featuring many of the voices found in CounterPunch, saw the words “Channel Unavailable” when tapping their clicker.

And so the war on Iran by Britain, Israel and the US continues using propaganda, proxy militants and asymmetric warfare.

Unlike the US, whose authorities have so often had to get around the first amendment to ban media from Americans, the UK has no law against the abridging of freedom of speech or against “infringing on the freedom of the press”. The decision was made by Ed Richards, previously Senior Policy Advisor to Tony Blair and a Controller of Corporate Strategy at the BBC. He now runs OFCOM, a regulatory agency charged with judging what news Britons are able to view.

One of the broadcast regulator's central arguments about Press TV is that it is not convinced that editorial control is based in Britain. I've worked for numerous foreign channels that are allowed to broadcast in the UK, so I know this discrepancy will come as a surprise to my former employers at the London offices of CNN International, Bloomberg and Al Jazeera, all of which ultimately answer, editorially, to bosses in Atlanta, New York and Doha.

Press TV Ltd., a UK-based production company making programs for Press TV has also been fined USD 155,000. This was because the channel in Tehran, broadcast an interview with Maziar Bahari of Newsweek whilst he was in prison. Bahari, who I have appeared with on discussion panels about the situation in Iran, is on the record as saying he wants Press TV banned and, basically, war on Iran. His views on banning TV stations are shared by the British government. We know this thanks to WikiLeaks which released a secret cable from 2010 detailing the views of Jaime (sic) Turner, “Deputy Head of Multi-lateral affairs at the UK Foreign and Commonwealth Office”:

Her Majesty's Government is looking at other ways to address the issue. Her Majesty's Government is exploring ways to limit the operations of the Islamic Republic of Iran Broadcasting's PRESS TV service. However, UK law sets a very high standard for denying licenses to broadcasters. Licenses can only be denied in cases where national security is threatened, or if granting a license would be contrary to Britain's obligations under international law. Currently, neither of these standards can be met with respect to PRESS TV, but if further sanctions are imposed on Iran in the coming months, a case may be able to be made on the second criterion.

While it is obviously a badge of honor for journalists to provoke such paranoia in a government - how is Press TV threatening UK national security?! - The cable also revealed Britain to be begging for US intervention vis a vis France:

5. (S) In the immediate term, Her Majesty's Government plans to lobby the French government to approach Eutelsat and press it to drop Islamic Republic of Iran Broadcasting's broadcasts from the Hotbird satellite. Islamic Republic of Iran Broadcasting broadcasts several channels from the satellite, both domestically (even most terrestrial TV channels in Iran are dependent on a satellite and repeaters) and internationally, so it is an important source of income for Eutelsat. While it would be unlikely for the company to agree to drop the Islamic Republic of Iran Broadcasting broadcasts spontaneously, Turner believes it would be susceptible to an approach by the French government because of the cover it would gain from complying with an official government request. Her Majesty's Government would appreciate the US Government engagement with the government of France on this issue.

Nothing happened as regards London lobbying Paris to push the channel off the Eutelsat satellite but over here, I have witnessed bizarre examples of British journalists wishing to crush press freedom. Only in the past week, the UK Sunday Times' Eleanor Mills wrote that Press TV “… has been fined £100,000…by the TV regulator OFCOM; many may think a more fitting punishment would see the station taken off air.” Such is the insouciant hackery of some British journalists when it comes to issues of free speech.

Those who have watched Press TV (it is, of course, available on the internet let alone nearly twenty free-to-air satellites) will know that its coverage of international events does not conform to the neoliberal news and current affairs brainwashing paradigm in mainstream newsrooms. It is one of the only TV stations in the world that genuinely gives international news, on a daily basis, covering all continents.

As CounterPunch readers know, there is already a war on Iran and this British decision is another front. Let's hope that at least some of OFCOM's board - you know who you are, Colette Bowe, Lord Blackwell, Dame Lynne Brindley, Tim Gardam, Dame Patricia Hodgson, Stuart McIntosh, Mike McTighe and Jill Ainscough - will realize that the purpose of the regulator was not to infringe on press freedom. In the meantime, still legal channels such as Russia Today are so far tolerated and give British viewers a view of the world different to the sanitized Orwellian fictions available on terrestrial television in the United Kingdom. And soon, as British viewers continue to switch off their television sets and boot up their computers, the UK government may realize that it is powerless to ban information getting to the masses.

* Afshin Rattansi runs Alternate Reality Productions Ltd. One of its commissions is Double Standards, a political satire show for Press TV, broadcast every Saturday at 2230 GMT. Shows can be accessed via www.doublestandardstv.com.