The electricians who provided some of 2011's most militant workplace organising appear to be heading towards defeat, as their Unite union urges them to sign up for pay cuts of around a third. 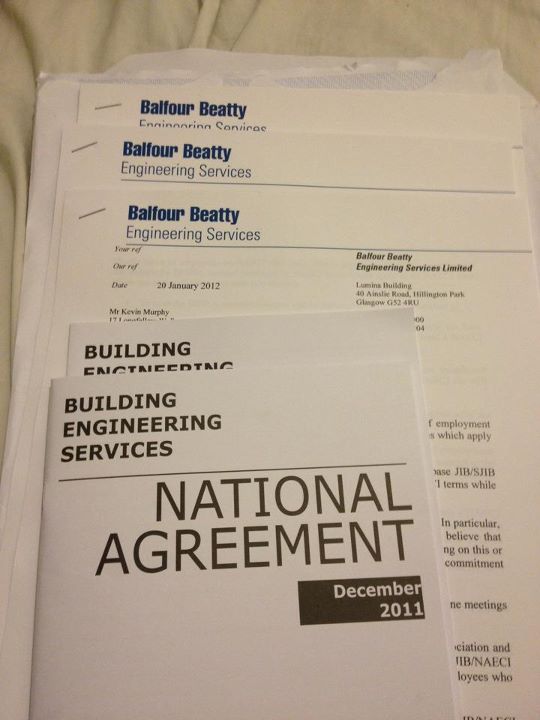 The 'agreement' which Unite are now urging members to sign

Towards the end of last summer, electricians angry at the construction employers' proposed new Building Engineering Services National Agreement (BESNA) started their own rank-and-file initiative. A major driving force for this development was mistrust of the union's bureaucracy, and this perspective was confirmed when 'negotiator' Bernard McAulay described the Sparks movement as "cancerous" in an email to fellow executive member Gail Cartmail.

The Sparks' grassroots organisation was an extremely positive step, and for a while it seemed like the Sparks were pointing towards a new form of workplace organisation for the UK. Weekly workplace demos and roadblocks plus links with Occupy and student protesters exerted much pressure on the union tops. However, the electricians remained within the confines of Unite in so much as they allowed people like McAulay to 'negotiate' in their name, and set the terms of official ballots.

For its part, since McAulay's statement, Unite has done its best to get close to Sparks, the better to strangle their struggle. McAulay and Cartmail dragged their feet over a strike ballot, and when one was finally called, it was only for Balfour Beatty. The company are the largest of the seven BESNA firms, but three quarters of those facing 'sign or be sacked' ultimatums were not covered by the ballot. In the end, electricians voted for strike action by a huge margin, but Unite cancelled the strike as soon as Balfour Beatty threatened a legal challenge.

Still, on Wednesday 7th December - the day the strike was supposed to have been - electricians hit Balfour Beatty sites around the country, and they were joined by others taking unofficial measures. But then Christmas came, and the latest ultimatum was only weeks away, with no major escalation planned.

On 9th January, the latest - and likely final - deadline passed. Since then, Unite have announced their attention to reballot Balfour Beatty workers. This is obviously too little, too late, and no doubt McAulay and co. will be delighted at reports that between eighty and ninety per cent of electricians have now signed their contracts. Unite are now urging the remainder to sign up, on the basis that this is the only defence against redundancy.

This is all quite deliberate. Union tops - or "union fat cats" as some Sparks have dubbed them - are a class enemies of their members. If a grassroots worker rebellion is to have a chance of succeeding, it must be so huge and so organised as to make the union leadership irrelevant. Despite the bravery and dedication of the Sparks, it is little surprise that so many electricians are now reconciling themselves to a drastically lower quality of life, and signing BESNA. After all, it is better than the dole queue, and only a fully worked-out grassroots plan of action could have convinced that eighty to ninety per cent that it is worth keeping up the fight.

The struggle is still ongoing, and delegates at a recent meeting voted for an indefinite site walkout should one worker be sacked for not signing BESNA, so it is too early for post mortems. And those directly involved in the fight will be best placed to point out tactical errors once the dust has settled. The establishment of a rank-and-file workers' committee is still a first in the UK fightback against twenty-first century austerity, but it seems it will not be the turning point.