John Voysey from Herefordshire will appear at Wrexham Magistrates Court on Wednesday 1 February charged under the Census Act 1920 with failing to complete the 2011 Census. John has been a conscientious objector since 1947 and is still standing up for his principles today, aged 82, to the point that he will refuse to pay any fine imposed rather than 'become an accessory' to the actions of the arms industry. Join John for an anti-war vigil outside the court from 11am. 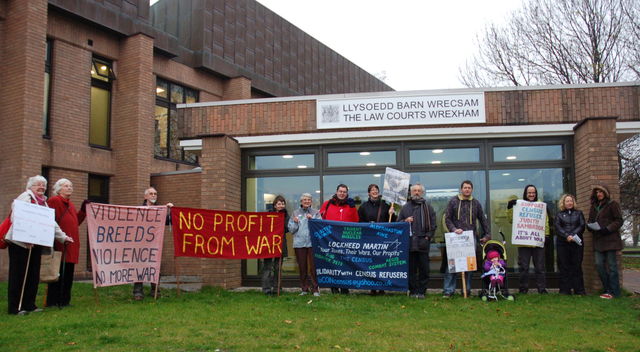 John Voysey is a Quaker from Herefordshire who, together with other members of his Meeting, refused to comply with the 2011 Census and gave the Office of National Statistics clear reasons for this refusal on grounds of conscience.

"John declared himself a conscientious objector when he was conscripted to the armed forces in 1947. ‘I remain a conscientious objector’, he explained. He told the Friend that if he paid the fine he would ‘become an accessory’ to the actions of the arms industry... It remains unclear whether the authorities plan to prosecute all boycotters or whether they are picking out a few at random. John and his wife Anne refused to complete the census form for the house that they share, but only John has been charged. He suspects that the authorities see him as ‘the head of the household’, which he regards as ‘a very sexist approach’. John is surprised to have been summoned to appear at Wrexham Magistrates’ Court despite living in Hereford. He said: ‘The whole basis of British justice is that you’re tried locally by your peers’."

John argues that the ONS position that it had no choice but to award the contract to Lockheed Martin under European contracting regulations is a nonsense and that a country is perfectly within its rights not to engage in a contract with an unethical company.


A BIT OF CONSCIENTIOUS OBJECTOR HISTORY

During the second World War, 61,000 people applied to be registered as COs. Many COs were treated as pariahs at work and in their communities. Many local councils sacked COs who worked for them and other employers sacked all those who were openly pacifist. By the end of the war, some 5,000 men and 500 women had been charged with conscientious objection offences, and most were sent to prison.

After the war, 10,000 further COs registered, some of whom served prison sentences before conscription was finally abolished in 1960.


LOCKHEED MARTIN AND THE CENSUS

Lockheed Martin is the world's largest weapons manufacturer. It jointly runs Aldermaston AWE, makes nuclear weapons, fighter jets, cluster bombs and many other deadly products. It has interrogation contracts at Guantanamo and Abu Ghraib and is implicated in torture. It has been awarded a £150 million contract for processing the 2011 England and Wales Census data.

The court is situated between the Memorial Hall and swimming pool.

Parking is available right next to court house (access from Chester Street).

A cafe and toilets are situated in the swimming pool building adjacent to the court. There are also public toilets in the car park.

The vigil will be held from 11am until at least midday when the court case is scheduled to begin.

A network of census refusers and supporters, organising under the banner 'No CONcensus' has been offering information and solidarity to defendants in census refuser cases, which are being heard all over the country. Many people are being required to travel long distances from their homes to hearings in other towns and cities.

No CONcensus can be contacted at

Good for him! This man is a real inspiration.

I have been summoned to Plymouth Magistrate court on the 1st Feb 2012. Looks like any one being summoned will be done on this day in different courts to split support. I written to the court and have asked for a later date though as my summons only arrived to me on the 20th January 2012 with only 7 working days to get a defence together and also asked to have it heard in Barnstaple Magistrate Court as Plymouth is over a four hour round trip and Barnstaple is 20 minutes away. I am a married mother of six young children getting to Plymouth will be very hard for me to acheive and my mother is a witness against the non compliance officers statements ( they have lied through their teeth to get this to court defaming my character in the process) and she is unable to make such a long journey due to her health.
Plymouth Magistrate Court verbally have told me Plymouth is where the census summons for this area are being processed and it will have to be there but I got a free half hour with a crimanal lawyer who believes this is not so and for the reasons I give that they should move hearing to Barnstaple Magistrate Court.
The CPS also gives me two birth dates on the case summary just sentances apart and they are in bold print, neither are my birth date. The birth date is also wrong on the summons. I have pointed this out to the court and the CPS and also pointed out that on the day the non compliance officers visted me on leaving I then issued a complaint about them which is only now some nearly 7 months later being looked into. THe CPS where unaware of this complaint. I await the reply from the court and CPS with interest !