Having attended over 110 screenings in America, Mexico, Canada and Japan
Franklin López will continue his world tour in the UK this April his
film END:CIV ( 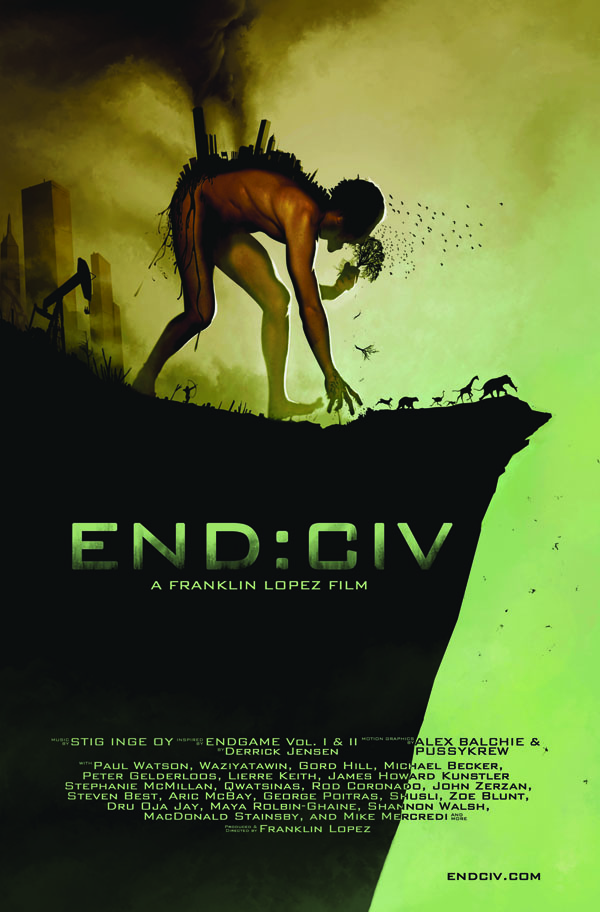 Having attended over 110 screenings in America, Mexico, Canada and Japan
Franklin López will continue his world tour in the UK this April his
film END:CIV (

END:CIV illustrates the brutality of a civilization addicted to
systematic violence and environmental destruction, and the heroism of
those who confront it head-on.

Through rapid-fire video-game graphics, interviews, war footage and
satire END:CIV mocks the excesses of the global economic system, and
examines the necessity for effective resistance.

As the UK is beginning to experience more frequent environmental crises
resulting from climate change and a history of poor environmental
management this film will be instrumental in bringing awareness of the
need to confront the system which allows this destruction to continue.

After the screening Franklin will answer questions relating to the film
and ask those present to consider what action they are prepared to take
to save the landbase they rely on to survive.

In 1994 he founded subMedia.tv and his work has been featured on
Canada’s City TV, Current TV, BET, and Democracy Now!

"By far, the most routinely-praised contemporary media activist is
Franklin López. His shows and films not only possess a distinctive look
and feel, but they also contain a wicked sense of humor … López’s work
engages in constructing a new vision where popular culture serves the
interests of the poor and dispossessed, where humor is reignited within
activism, and the D.I.Y. ethics of punk and hip-hop allow those with
talent and gumption to be the media, once again." – Chris Robé, Pop Matter