25 supporters gathered at Wrexham Magistrates Court on Wednesday 1 February in solidarity with John Voysey, 82, of Herefordshire who is charged with failing to complete the 2011 Census. John, who registered as a conscientious objector in 1947 while still a schoolboy and later became a Quaker, has refused to complete the 2011 Census on moral grounds because of Lockheed Martin's £150 million contract for processing the census data. The case has now been adjourned until Friday 2 March midday for a pre-hearing and will be heard by a District Judge in recognition of the important legal points raised by the defendant, who is representing himself in court. 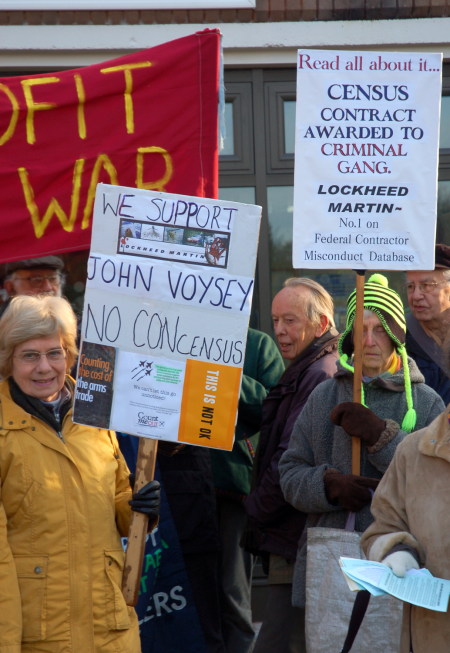 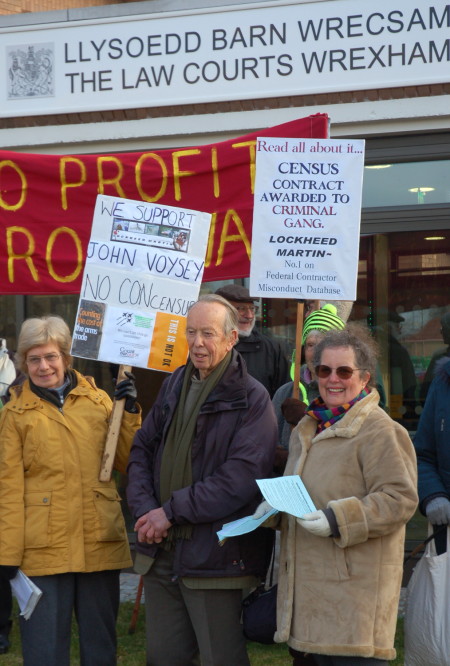 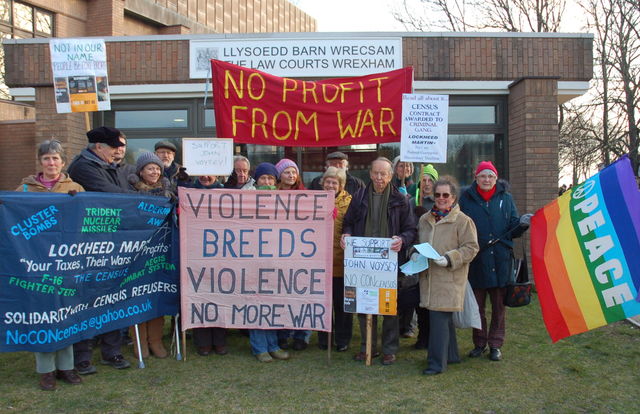 In front of the court 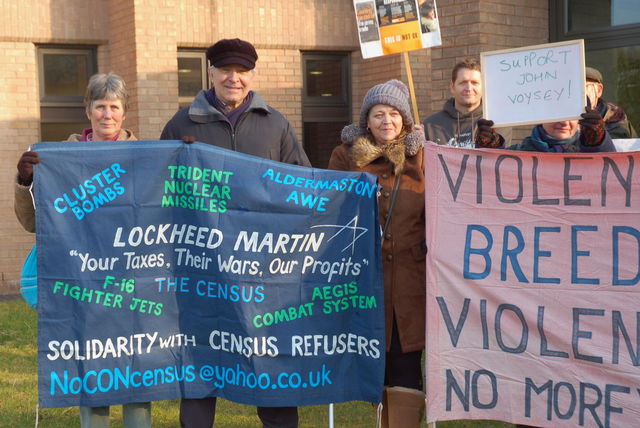 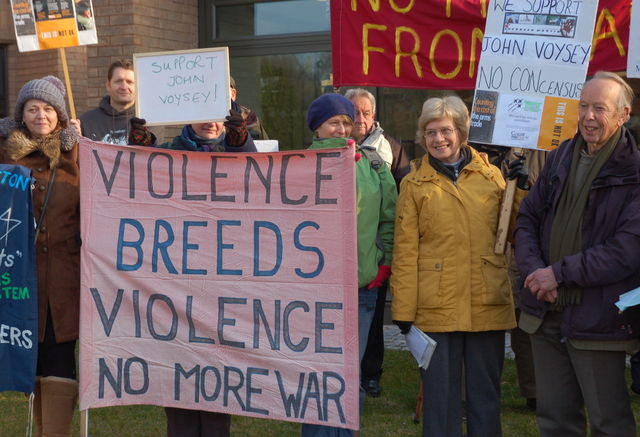 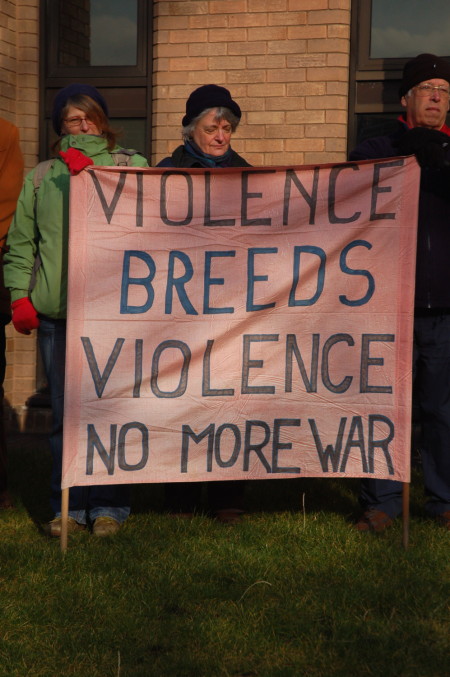 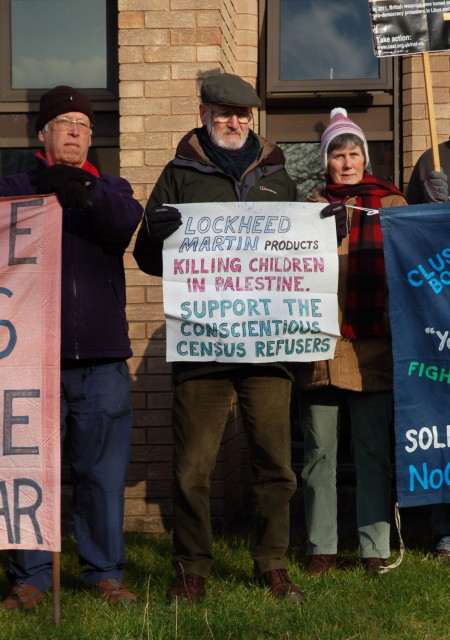 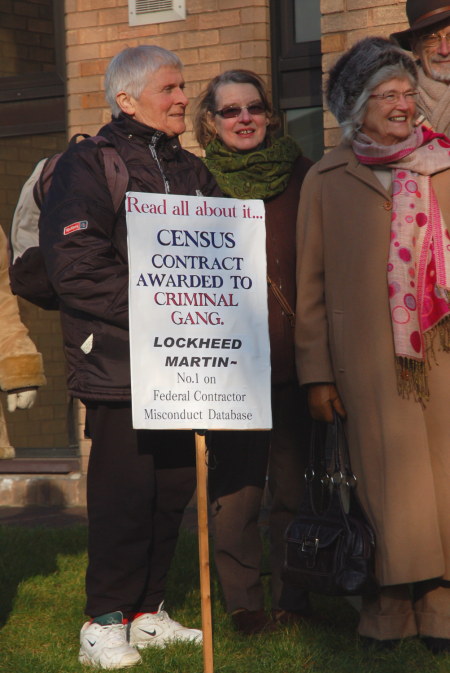 John was supported by Quakers from Wrexham, Herefordshire and Shropshire, along with members of Wrexham Peace & Justice Forum, the group NoCONcensus including two other census refusers with ongoing court cases (Sarah Ledsom of Bromborough, Wirral and Judith Sambrook of Shrewsbury), and others.

While most supporters went into the court to watch the proceedings, others maintained the vigil outside throughout.

There were six chairs at the back of the court, four of which were already occupied by reporters as 15+ of John's supporters filed in just before midday. We occupied the two vacant chairs and all the remaining space at the back of the court, standing against the walls and sitting on the floor according to preference. Another defendant was awaiting her sentence and in due course the three magistrates came back in along with the clerk, dispensing with the usual requirement for everyone to stand for them, which was refreshing. Maybe it's more common these days but I haven't seen it before. The magistrates handed down a sentence of six points and a fine to the speeding driver who escaped a ban on account of her caring responsibilities and then it was John's turn. I'd got acquainted with another (not a census) defendant and his supporter in the waiting area. They'd been in the building since 10.30am with no idea when their case would be heard. There didn't seem to be any ushers around and the front desk had been very vague about the order of play, so once the clerk announced that John's case would be next I went out to let them know while the clerk got busy, inviting the reporters to move forward, finding a few more chairs and generally attempting to accommodate everyone. The other defendant and his friend joined us as observers and the hearing got underway.

John Voysey confirmed his address, date of birth etc. and that he was 'content' to appear in court without the benefit of legal representation, listened to the charge that on 11 August 2011 at his home address he refused to make a Census return as required under the Census Act 1920... and entered a plea of 'not guilty'. The clerk then explained that the case would be adjourned and that each party had an obligation to assist the court in identifying what the issues in the case are, to identify what evidence will be required and that Mr Ellis of the CPS would be happy to provide evidence requested by the defendant.

The clerk then invited John to outline his reasons for pleading not guilty.

John explained that he had no objection in principle to filling out census forms and had done so previously, but when he and his wife found out that Lockheed Martin, the largest arms manufacturer in the world which makes Trident nuclear missiles, cluster bombs and so on, was being given £150 million of taxpayers' money for a Census contract, they could not cooperate. He said that this was a joint decision between him and his wife who are joint householders yet only he has been prosecuted. He considers that this is discrimination on the grounds of sex. He also commented on the fact that only 400 out of possibly well over a million census refusers were being prosecuted and questioned how the prosecutions have been decided and whether one could say justice was being done in these circumstances. He went on to question the decision to hold court hearings miles from defendants' homes (in his case about 65 miles). Although at this point the clerk discussed with the magistrates the possibility of moving the case to Shrewsbury and it was agreed that this would be desirable, the court went on to arrange the next hearing back in Wrexham, another 130 mile round trip for John.

Referring to the prosecution witness statement of Scott Howell of the ONS, John challenged the assertion that ethics should not be considered when choosing contractors and quoted the late Václav Havel who said "the prerequisite for everything political is moral." John talked about statements from previous government ministers claiming that "we do not sell arms to repressive regimes", which he said "we know is nonsense." Arms companies are busy fueling the arms race, including nuclear weapons. As a pacifist, John said, this doesn't bear thinking about. Later, he referred to the current government's position on arms sales, quoting Defence Equipment Minister Peter Luff, who has said: “There will be a very, very, heavy ministerial commitment" to arms sales.

The court clerk commented that under the Census Act, a person commits an offence if they refuse or neglect to complete the forms, but said there is also a general requirement, before a criminal offence is considered to have been committed, for a person to be shown to have had 'criminal intent'. John added that there is also the Human Rights Act which does have clauses dealing with conscience and religious belief even if the Census Act does not.

John commented on the cost to the public purse of pursuing these cases at a time of financial constraints - "Mr Osborne says the country is broke" - pointing out that fines imposed are unlikely to defray the costs of bringing cases and that the cost to the taxpayer will be even greater where defendants are sent to prison (for non-payment of fines). He also commented on the extra costs involved in cases being heard so far from defendants' homes.

He went on to talk about statements made by the current government that it would have cancelled the census had the contracting process not already gone so far by the time it was elected. Francis Maude has said that 2011 is likely to be the last census. If this is the case, asked John, what is the purpose of prosecution? It's hardly going to protect the public and a successful prosecution can't deter someone from doing something in future when the circumstances that led to that act aren't going to happen again. John commented that this leaves only "vindictive punishment" which is not what the courts are there for.

The clerk identified two main threads in John Voysey's case: that the legislation under which he is being tried (Census Act 1920) is not Human Rights compliant and that the decision to prosecute amounts to an abuse of process. The prosecutor Mr Ellis stated that the case was simple: Mr Voysey had refused to complete his census form and has broken the law.

A pre-trial hearing was arranged for midday on Friday 2 March back at Wrexham Magistrates Court. It was not clear why the next hearing was not arranged at Shrewsbury given John's submission on this point and the clerk's assertion that it should be possible to move the case. The clerk described the case to the magistrates as "unusual" and at his suggestion the magistrates agreed that a District Judge should preside over this next hearing on account of the legal points that had been raised (a District Judge is legally trained, with a minimum of five years in legal practice, whereas magistrates are not).