No war on Iran! For regime change from below!

The war drums against Iran are beating ever louder. The new embargo on Iranian oil, to come into force on July 1, is only the latest in a long list of measures imposed by US and EU imperialism. It bans all new oil contracts with Iran, and cuts off all existing deals. Also, all of the Iranian central bank’s European assets are to be frozen. 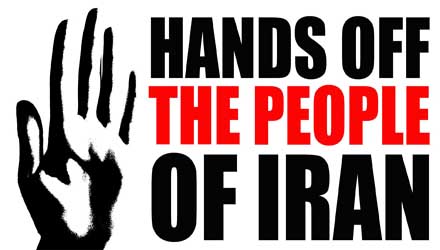 Make your voice heard against war and repression, urges Hands Off the People of Iran chair, Yassamine Mather

The war drums against Iran are beating ever louder. The new embargo on Iranian oil, to come into force on July 1, is only the latest in a long list of measures imposed by US and EU imperialism. It bans all new oil contracts with Iran, and cuts off all existing deals. Also, all of the Iranian central bank’s European assets are to be frozen.

We are told that the sanctions are designed to weaken the regime and “force Iran back to the negotiating table” over its nuclear programme. This is clearly nonsense:

In reality, the ‘nuclear danger’ is used by imperialism as an excuse to deal with an increasingly unstable situation in the Middle East. Imperialism has recently lost a number of friendly regimes in the region (like Egypt) and needs to reassert control in this oil-rich area. War is also a useful distraction from economic misery and the current crisis of capitalism.


Former International Atomic Energy Agency analyst Robert Kelly has debunked the latest report purporting to show that Iran is developing nuclear weapons. Of the three pieces of ‘evidence’ that are not out of date, two are entirely unverifiable, and one an obvious forgery (see

http://hopoi.org/?p=1841). But the regime draws sustenance from these rumours: the threats against Iran help the theocracy to stay in power, neutralise the opposition and unite the people behind a regime under attack from imperialism.

But the sanctions are unlikely to dramatically weaken the regime. The rich and powerful are able to protect themselves to a large degree from the effects. In fact, leaders of sanctioned regimes are almost always strengthened (and enriched) by sanctions.

However, the sanctions will mean even more misery for ordinary Iranians: many workers will not receive their wages in time (if at all) and even the BBC has warned that social security payments and the remaining food subsidies could be the first to be cut by a theocracy under financial pressure. This will only increase the hardship and miserable conditions that our brothers and sisters in Iran have had to endure for many years.
Further, the military provocations of US-led imperialism - assassinations, sabotage and preparatory military manoeuvres in the region - have also dramatically upped the tension in the country and are being used by the theocracy to increase repression.

As the examples of Iraq and Afghanistan prove beyond doubt, democracy can only come from below, from the people themselves. But a people driven to their knees by brutal sanctions are hardly in the position to overthrow dictatorship.

We know from history that sanctions are only the first step in wars being waged against ‘unfriendly’ regimes. A military attack against Iran is very much on the agenda. Should the regime really decide to close the Strait of Hormuz, this could happen sooner rather than later.

That is why it is so important that we side now with the people of Iran in their struggle against their own theocracy and the threats by imperialism!

Make your voice heard now! Send us a message in the form of an email, voice mail, short video or a photograph holding the poster pictured alongside (download from www.hopoi.org) and encourage your comrades and friends to do the same. We will post all messages on a special section on Hopi’s website and on YouTube, Facebook and other social media sites. Plans are also afoot for solidarity events, film screenings and fundraising events.

Chair, Hands Off the People of Iran