On Saturday 4th February for an hour over lunchtime members of Clydeside Industrial Workers Of The World, Glasgow Anarchist Federation and Solidarity Federation gave out 500 leaflets explaining the demands of the IWW Pizza Hut Workers Union in Sheffield. We asked members of the public to refuse to eat at the prime site Argyle Street Pizza Hut until management negotiates with the collective demands of organised workers in Sheffield. 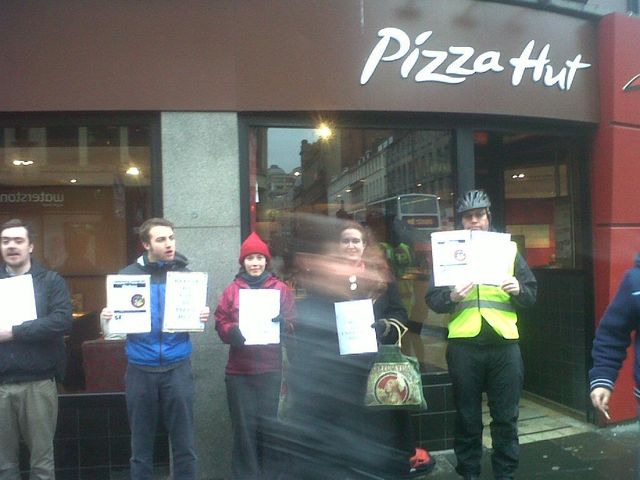 This demand was also stated on placards as well as the main demands of time and a half for unsociable shifts, improved delivery drivers commission and safe moped gear. Half the leaflets also had a model letter on the back for the public to send to management supporting the workers. One member of staff came out to take a leaflet. Another took one on their way in to start their shift. The manager claimed that we did not know the pay and conditions at her restaurant and that Sheffield had nothing to do with them. A member of staff later confirmed that they do not get time and a half for bank holidays. The manager told us to move away from her restaurant. We said No!. She then said that she was going to ring the area manager. Nothing more was heard about this. There was lots of interest from people walking by and several who were sympathetic. Protests also took place in Birmingham, Hull, Liverpool, London and Sheffield.