Demo: Peace for Iran and Syria - No to War

This is the start of the BIG PEACE OFFENSIVE to prevent a war with Iran or Syria. 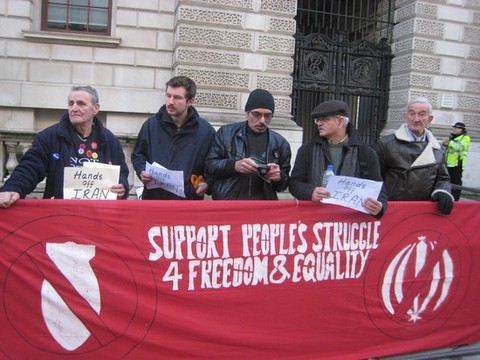 Listen to the People

We are organising protests to highlight the great concerns held internationally, that a war on Iran will affect everyone. We will not be party to the intended destruction of any nation. We are peaceful people and have a duty to promote peace for everyone, everywhere. Bombing countries is not a solution to anything: it will only escalate retaliation. We will not stand by and see a repeat of what happened in Iraq and Afghanistan. Too many people have died and been seriously injured due to lies and deceit.

We call on world leaders to revalue the situation and listen to the people they represent, and...

Hands Off Iran and Syria!

Building the BIG PEACE OFFENSIVE towards:
2012 Prepare to "DO NOTHING" and "BUY NOTHING" for Peace.


Exposed: The Arab agenda in Syria

Here's a crash course on the "democratic" machinations of the Arab League - rather the GCC [Gulf Co-operation Council] League, as real power in this pan-Arab organization is wielded by two of the six Persian Gulf monarchies composing the Gulf Cooperation Council, also known as Gulf Counter-revolution Club; Qatar and the House of Saud.


Syria and Iran: the great game

This summer a senior Saudi official told John Hannah, Dick Cheney's former chief of staff, that from the outset of the upheaval in Syria, the king has believed that regime change would be highly beneficial to Saudi interests: "The king knows that other than the collapse of the Islamic Republic itself, nothing would weaken Iran more than losing Syria."

“War with Iran is already here,” wrote a leading Israeli commentator recently, describing “the combination of covert warfare and international pressure” being applied to Iran.

Although not mentioned, the “strategic prize” of the first stage of this war on Iran is Syria; the first campaign in a much wider sectarian power-bid. “Other than the collapse of the Islamic Republic itself,” Saudi King Abdullah was reported to have said last summer, “nothing would weaken Iran more than losing Syria.”


Armed Groups Inside Syria: Prelude to a US-NATO Intervention?

Russia and China have vetoed the UN Security Council draft resolution on Syria pointing to the existence of armed groups involved in terrorist acts including the killing of civilians.

These armed groups have been involved since the outset of the "protest movement" in Daraa, southern Syria, in March 2011.


Wesley Clark ( US 4 Star General ) US will attack 7 countries in 5 years.

He openly says that there was a policy coup . ( Donald Rumsfeld , Paul Wolfowitz , Dick Cheney ) - Project for a New American Century .

He stated that they are going to destroy the governments of 7 countries in 5 years .Countries listed below !

They must clean up all former soviet client regimes before the next super power comes on to challenge us."


Iran group says No to sanctions

An Iranian solidarity group condemned the European Union's decision to impose an oil embargo on Iran, saying at the weekend that the punitive measure amounts to "a declaration of war upon the Iranian people."