A Gloucestershire resident takes to the High Court in London tomorrow, Wednesday February 8th in a bid to stop the transfer of all nine of the county’s community hospitals and local health services out of the NHS and into a standalone ‘Community Interest Company’ (CIC). Gloucestershire health bosses’ plans to transfer the county’s community health services, including over 3000 NHS nurses, physiotherapists, health visitors and podiatrists (1), out of the NHS in October 2011 have been halted due to the legal action and a campaign in Gloucestershire that has involved thousands of people in protests, public meetings, petitions and fundraising (2). 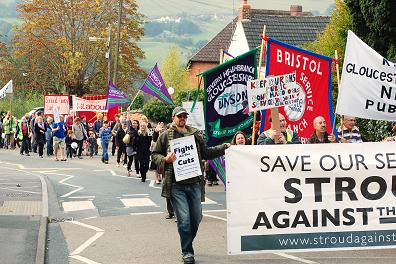 Text of press release below, see also our call out for campaigners to join us (10am for 10.30, high court, chancery lane, off fleet street, wed 8th Feb):

Summary: A Gloucestershire resident takes to the High Court in London tomorrow, Wednesday February 8th in a bid to stop the transfer of all nine of the county’s community hospitals and local health services out of the NHS and into a standalone ‘Community Interest Company’ (CIC). Gloucestershire health bosses’ plans to transfer the county’s community health services, including over 3000 NHS nurses, physiotherapists, health visitors and podiatrists (1), out of the NHS in October 2011 have been halted due to the legal action and a campaign in Gloucestershire that has involved thousands of people in protests, public meetings, petitions and fundraising (2).
If successful in today’s permissive hearing, the case will then proceed to full Judicial Review the following day (Thursday 9th) in the High Court in Aldwych, London. The case will be heard from 10.30am to 4.30pm on both days.

The case is being taken by Michael Lloyd, 75, a retired railwayman from Stroud, Gloucestershire. Mr Lloyd said: “I’m worried that if local health services leave the NHS they will be more vulnerable to cuts, more fragmented, more bureaucratic and less accountable. Staff tell me they are frightened for their future, and have had no say in leaving they NHS they take pride in working for.”

Solicitors for Mr Lloyd, Leigh Day & Co (2). are bringing a case that NHS Gloucestershire has acted unlawfully by not allowing proper consideration of other options, including those that would keep local health services in the NHS. Rosa Curling of Leigh Day & Co. said: “NHS Gloucestershire had a number of options open to it, some of which would allow the community services in the area to remain provided by a NHS body. They failed to properly consider these options and their subsequent decision to award the contract to the social enterprise company is therefore unlawful.”

Caroline Molloy from local anti-cuts campaigners Stroud Against the Cuts (3), who are supporting Michael Lloyd’s case, said: “NHS bosses are using harmless sounding terms like social enterprise and making baseless claims about their potential benefits. But experience from other areas shows that where social enterprises have taken over services, patient care has suffered due to higher costs, and the need to turn a profit. Even where health social enterprises have been praised, once services have been transferred out of the NHS they have been forced to compete with multinational health companies waiting in the wings, and have been unable to, as in Central Surrey.”(4)

A National Audit Office report last year described health social enterprises (such as CICs) as “a first step towards stimulating a market” in the NHS (5). People across the region remain largely unaware that, even before the passage of the widely opposed Health & Social Care Bill (returning to parliament today), much of the South West’s community health services were transferred out of the NHS in October last year.

Dr John Lister of national campaign group Health Emergency said: “It is vital to expose this type of deal to public scrutiny, despite the determination of health bosses to keep them under wraps. It is a scandal that changes like this, which can have a huge effect both on the vulnerable people that use these services, and on the livelihoods of thousands of healthcare workers have been taken behind closed doors.”

Despite assertions to the contrary, John Lister adds “There is no compulsion on health bosses to open these services up to social enterprises or the private sector: in most of England community health services continue to be successfully provided by the NHS, and that's how it should be in Gloucestershire.”

If successful in the court hearing, campaigners pledge to do everything in their power to raise awareness of the situation and force local NHS bosses to listen to the public and keep services in the NHS.

http://www.stroudagainstcuts.co.uk/fightback/healthcarecuts/38-healthcare/95-latest-press-coverage.html. A petition begun on Friday 3rd February 2012 already has over 225 signatures, steadily rising, at time of going to press. For the petition text and latest number of signatories see:

http://www.gopetition.com/petitions/keep-gloucestershire-s-nhs-public.html. An Open Letter from the campaign to the Board of NHS Gloucestershire has been signed by many local District and County Councillors, and other notable local public figures:

http://www.leighday.co.uk/Home. Leigh Day & Co is regulated by the Solicitors Regulation Authority (SRA). The firm's SRA number is 00067679.
(4) Stroud Against the Cuts is a community group formed in November 2010. For more information see:

http://www.guardian.co.uk/society/patrick-butler-cuts-blog/2011/sep/19/social-enterprise-big-society-gets-reality-check.
(6) The National Audit Office report highlighted a number of concerns with health social enterprise, including the “risk that some enterprises will struggle to become self sustaining businesses, for example, being able to attract finance, to react to and withstand variations in demand and to compete in the market place... some pre-Right to Request spin-outs [social enterprises] have been over-optimistic about the amount of extra work they will win in competition. The Department’s plan is for competition to take its course. Against this background, there has been no assessment of what the failure rate of enterprises will be, [and] how this will impact on the value for money case” (page 7 of the summary document). To read the full report see: