The adjournment of Barbara Dowling's Census case in Glasgow on 26 January at the request of the Procurator Fiscal now appears to have been based on a false premise. Read on... 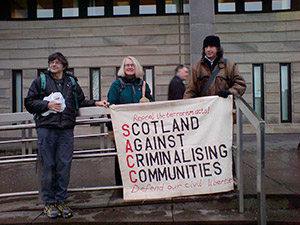 Barbara Dowling (centre) outside the court in Glasgow on 26 January

In the first Scottish Census Refuser case we're aware of, Barbara Dowling appeared at Glasgow Sheriff Court on 26 January to defend herself against a criminal charge of failing to complete her census form properly.

Barbara arrived at court ready to explain that her actions were in protest at the involvement in the census of defence and intelligence contractor CACI. CACI is implicated in human rights abuses at Abu Ghraib prison in Iraq and has so far ducked responsibility by claiming legal immunity against prosecution as a US government contractor.

However, to the surprise of Barbara and her supporters, the Procurator Fiscal asked for the trial to be adjourned, on the grounds that the outcome of a case (PV v Parveen Akram) currently before the UK Supreme Court could render evidence collected by Register Office staff in relation to census cases inadmissible. The Sheriff concurred and the case was adjourned to the following dates: intermediate diet (pre-hearing) on 6 May and trial diet (full hearing) on 15 May, even though it was not known when the Supreme Court would rule on Akram.

The 'Cadder' case upon which the Akram defence relied is reported here and here with the Sheriff's decision in the Akram case here.

Mrs Akram lost her case, but the legal principle established by the Sheriff was that suspects have the right to legal advice if interviewed by the police, this right extending to "reporting agencies" such as those interviewing census refusers, presumably. It was clear that the Supreme Court decision could affect census cases throughout Britain, not just in Scotland and the information was duly circulated to other known census refusers.

Now, after a Freedom of Information request to the Office of the Advocate General (OAG) to clarify matters, it transpires that the case in question (Akram) hasn't been referred to the Supreme Court at all and is simply being referred back to the Sheriff at Glasgow to be 're-argued'. It seems rather strange that the veracity of the Procurator Fiscal's assertion was not checked by the Sheriff before agreeing to the adjournment and may be instructive to find out exactly when the decision not to refer the case to the Supreme Court was taken.

A further census case in Scotland, that of Mary Reid in Falkirk, has been adjourned with a question mark over the 'competence of the charge' given dispute between the parties over the date of the alleged census offence.

Scotland Against Criminalising Communities (SACC) is campaigning for all cases connected with the 2011 census to be dropped.

Richard Haley, Chair of SACC, said on the day of Barbara Dowling's hearing:

“The census is turning into a legal train-crash as well as an ethical and political one. Former Iraqi prisoners who say they were tortured by CACI staff are still trying, more than 7 years on, to get CACI to answer for its actions in US courts. It’s a disgrace that the Crown Office has so far been determined to rush to court with cases against principled ordinary people who have harmed no one. Today’s move gives the Crown Office a chance to think again. It should drop all the charges.”

For dates of upcoming court hearings, see the Count Me Out website.