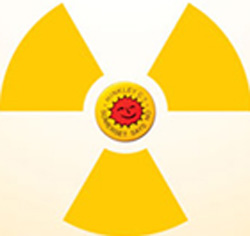 They braved the arctic blasts to prevent clear-cutting of the land in preparation for the construction of two reactors by EDF Energy at Hinkley Point.(map).

“Once again we are seeing EDF Energy cutting corners and flouting regulations. This is a very worrying sign. If this is how they operate, how can we trust them to run a nuclear power station safely?”

Fellow campaigner Sarah Stone added: “This whole application for the Hinkley C nuclear power station has been characterized by deceit and corporate bullying. We urgently need help to defend this land.”

According to the occupiers the site is ripe for resistance - “It's a 400 acre site with loads of trees and empty buildings” - so dust off yer climbing harnessess and dig that old tarp out from the back of the shed and head down there.

The action comes in the wake of last week's shocking revelation in a report jointly published by Unlock Democracy and The Association for Conservation of Energy. The report entitled, “A Corruption of Governance?” reveals how data provided to MPs and parliament during discussions on national energy policy was skewed in favour of the ‘new nuclear’ option.

The report also outlines that, on the basis of the Government’s own evidence, the UK does not need new nuclear to reduce CO2 emissions. It also shows that the building of new nuclear power stations to provide electricity is likely to mean higher fuel bills.

Activists across the country have renewed their pledge to gather at Hinkley Point nuclear power station on March 10th for a mass rally against ‘new nuclear’ and to mark the first anniversary of the Fukushima Daiichi nuclear disaster in Japan.