On 9th February 2012 John Catt, a campaigner against arms dealers EDO MBM Technology Ltd in Brighton, a subsidiary of American arms company ITT Exelis Inc, brought a case in the high court over the retention of data by the National Public Order Intelligence Unit on the National Domestic Extremist Database. 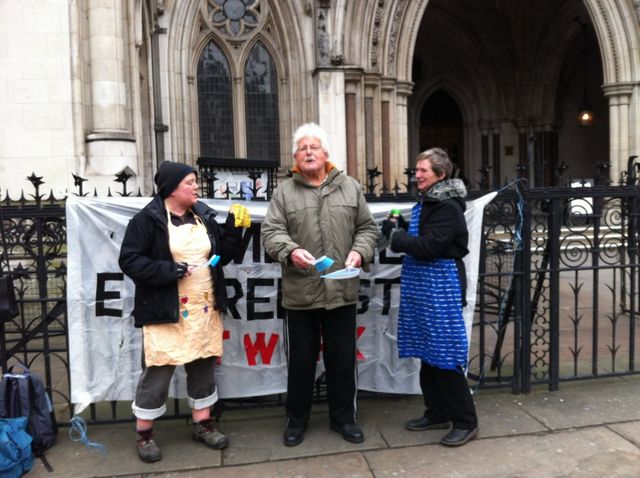 During the case Jeremy Johnson, lawyer for the Metropolitan Police and ACPO, said that 261 individuals details were stored on the database because of their connections to Smash EDO.

Andrew Beckett of Smash EDO said “In court the Metropolitan Police and NPIOU have grossly mis-characterised Smash EDO as an organised criminal group in order to justify their big brother database. This is a lie. The truth is quite the opposite.”

"The real criminals here are EDO MBM, and the British government's secretive police intelligence units that protect and serve this corporate perjurer and aider and abettor of war crimes."

In 2010 a Crown Court jury acquitted 7 activists of £300,000 damage to EDO MBM/ITT because, despite five days of cross examination of the company’s managing director, he could not convince the jury that ITT Exelis were acting lawfully.

Chloe Marsh, spokesperson for Smash EDO said “The enormous international political extremism of Britain, the USA and its allies goes on unreviewed by their respective judicial systems, while those who take a public stand against them face ever more monitoring, intrusion, and repression by these same state criminals.”

Smash EDO is planning a Summer of direct action aimed at closing down EDO MBM/ITT in 2012. The Summer campaign will commence on Mayday 2012 - see www.smashedo.org.uk/1

'EDO MBM Technology Ltd, Brighton is a subsidiary of US arms company ITT
Exelis. Excelis describes itself as 'a leader in Command, Control, Communications, Computers, Intelligence, Surveillance and Reconnaissance (C4ISR) related products and systems and information and technical services, supplying military, government and
commercial customers in the United States and globally.'

This corporation has a direct interest in the expansion of surviellance and intelligence led policing methods that are the subject of this Judicial Review.