Monday 2nd April is the 27th annual Bristol drone conference, but this years gonna be different. Bristol Against Arms Trade have teamed up with Bristol Stop the War and Bristol Palestine Solidarity Campaign, with the aim of making so much noise the conference will be a flop. 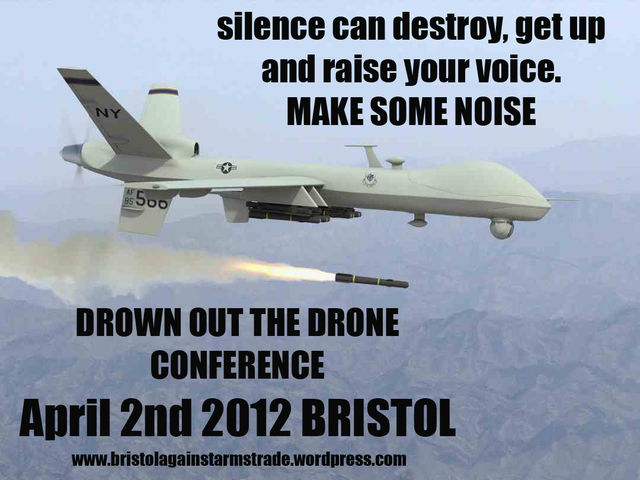 Over the past decade we have witnessed the growing use of unmanned aerial vehicles, commonly known as drones, to launch attacks around the globe. From Afghanistan to Somalia, from Gaza to Yemen, local communities live in fear of drones flying over their heads, looking for ‘targets of opportunity’. Legal experts and human rights organisations have also condemned the rise in targeted extra-judicial killing. Enabled by the use of armed drones.

Rolls Royce, Thales, EADS, BAE Systems, are some of the delegates at the 27th bristol UAV conference going on for two days, 2nd and 3rd of April. The focus will be future technologies and delegates from around the world will be attending, come and disturb their war like plans.