If we allow business as usual to continue, the planet will not be habitable by 2050 and the only people left will be the crews of the Trident submarines. We must not let the military industrial complex to continue to profit from irresponsible suppression of public debate. 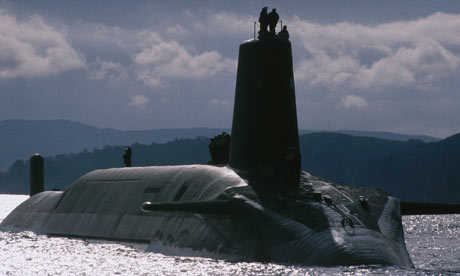 Preparations continue to replace Trident whilst at the same time no progress continues on international climate change agreements.

Over the past year billions have been spent on upgrading Aldermaston, ordering steel and working with the US on the missile compartment for Trident.

A key objective behind this enormous effort is stated in the initial gate document to justify this work. It is to “retain the capability to design, build and support nuclear submarines.” In other words we will build submarines simply to keep the military industrial complex in place. By this logic once the next generation of submarines is operational, we immediate start preparations to scrap these and build more. Sadly, this same rational is gripping those nations that would be the recipients of any missiles we fire. It is locking all key nations into an arms race as destructive as the Dreadnaught race that led to the First World War.

In contrast with the unstoppable momentum of the military industrial complex along with the unquestioning government support it gets in all key nation states, progress on reaching an international agreement on climate change does not even get out the starting blocks and is actively blocked by the same governments.

By all measures the Durban COP in December was a failure. Unfortunately it played a game the media loves - a disaster from start to finish rescued at the last moment by the heroic efforts of a couple of women working through the night. As people always like a happy ending, the true measure of its failure was never reported.

The output of this heroic last minute failure was a document called the Durban Platform. This obliges parties to submit by 28 February 2012 their views on options and ways for further increasing the level of ambition for increasing co-operation on climate change. With 14 days to go, there is not a single proposal anywhere. There is no discussion in the media. There are no government announcements. There is nothing. There is only a deafening silence punctuated by an unstoppable drumbeat for total war. Instead of co-operating to save our planet, we have the worst forms of competition being played out within a zero sum game.

Pious government statements about commitments on tackling climate change and cooperating internationally will not work. This has been the strategy for years. It has failed for years and it will continue to fail. A big issue such as climate change can only be tackled by addressing big issues. The biggest is the stranglehold the military industrial complex has on the world economy. It is a debate few want to raise because without military industrial complexes, the concept of the nation states is redundant.

Our government piously claimed in its Transition to a Low Carbon Economy all major decisions will be subject to a carbon impact assessment. However this is not even attempted for Trident which is the most major decision any government can take. This outrageous duplicity is something we think is only practiced by the worst dictatorships.

These calculation and their conclusions may not be pleasant, but they must be done and they must be shared with our adversaries. The first step towards co-operating on climate change is to commit to doing these calculations. The UK must propose this to the Durban Platform on the 28th Feb. There are no other options left.