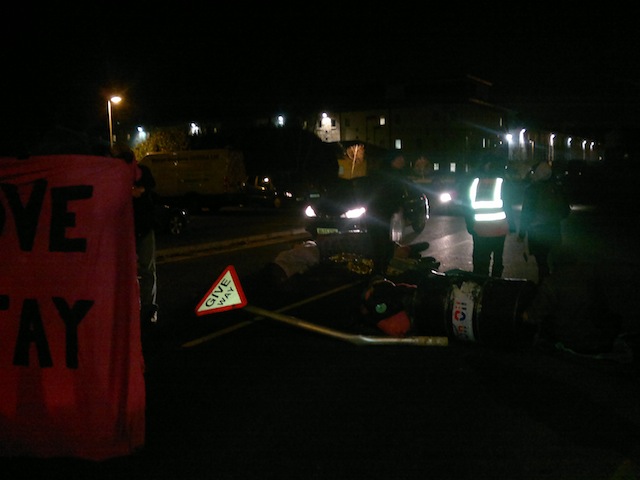 Anti-deportation campaigners are blockading both exits of Harmondsworth and Colnbrook detention centres, near Heathrow airport, in a bid to stop the forcible deportation of dozens of Ghanaian migrants held at Harmondsworth. A specially chartered flight carrying up to 50 deportees is scheduled to leave to Gahana from an undisclosed airport at ten minutes past midnight tonight.

Eleven activists from the No Borders network [1] have locked their arms together inside heavy-weight concrete blocks, preventing the coaches carrying the deportees from leaving the detention centre. Another protester is suspending herself from a 10ft tripod made of scaffolding poles. The blockaders, joined by at least twenty protesters holding banners and chanting anti-deportation slogans, have vowed to remain in place until the flight is cancelled.

This is the second time there has been a mass deportation flight to Ghana from the UK. The first was in November last year. Charter flights are being used increasingly by European governments to deport more and more unwanted migrants to a growing list of countries, with an average of one flight a week from the UK alone. [2]

The action coincides with a week-long 'convergence' of No Borders activists from across Europe at Goldsmiths college, south London. The event's callout had called upon supporters to “take action against various aspects of the border regime in London and the surrounding areas.” [3]

One of the blockaders, Dave Leighton, 34, said: “This flight has to be stopped. Everyone, not just a privileged few, should enjoy the freedom to move and stay wherever they want or need, regardless of their nationality or bank balance. Forcible deportations reinforce a screwed-up system whereby the rich and powerful use borders as a convenient tool to divide and distract ordinary people from the real causes of inequality.”

Another protester, Yvonne Mason, 26, added: “My friend will be on that flight. He suffers from chronic injuries following his violent arrest during an immigration raid last year. He has been locked up at Harmondsworth for almost a year without access to proper medical treatment. He should be provided with care and support, not be deported against his will.”

[1] No Borders UK is a network of groups and individuals who stand against all forms or repression and control and struggle for the freedom of movement for all. For further informations, see www.noborders.org.uk.

[2] As the government seeks to increase the number and frequency of forcible deportations, the use of specially chartered flights to more and more countries has increased significantly over the last few years. In the financial year 2009-10, there were 67 such flights, deporting a total of 2,144 people, at a cost of £10.3 million.

Every deportation is a violation of people's right to freedom of movement but mass deportation flights are a particularly sordid way to do that. On top of the trauma and hardship caused by forcible deportation, these charter flights further undermine the legal rights of deportees, as the emphasis is on filling the flight and getting rid of them as soon as possible, outside the public gaze, rather than ensuring the appropriate legal avenues have been exhausted. The UK Border Agency's Enforcement Instructions and Guidance states that "charter flights may be subject to different arrangements where it is considered appropriate because of the complexities, practicalities and costs of arranging an operation". Charter flight deportees are told that "removal will not necessarily be deferred in the event that a Judicial Review is lodged".

[3] The No Borders Convergence 2012 (13th – 18th February) is a week-long event featuring workshops, meetings and actions against the border regime. The callout and programme can be found at

Cops have now arrived - threatening and aggressive at first, but seem to have calmed down now, presumably because they've sent for the cutting team.

Before they arrived, the private security guards were very aggressive, attacking blockaders with dogs. They were fought off by other protesters on the scene.

Detainees had been put on the coach and had their phones taken off them, but have now had them returned.

It's been confirmed that the flight is supposed to be leaving from Stansted airport (the Home Office wouldn't normally reveal this info). About 50 people are believed to have been booked on the flight.

There are currently 17 in Harmondsworth still in the waiting area, with their phones removed. At least 2 people have been taken from Yarl's Wood detention centre to the airport.

Just before 9pm, about 25 riot cops arrived and surrounded the front entrance blockade. They were also aggressively trying to prevent newly arriving supporters from joining the blockaders, but the crowd got bigger nevertheless. At 9:30, the senior police officer imposed Section 14 of the Public Order Act, asking everyone to leave to get arrested. The blockaders obviously didn't move, but supporters moved to the other side of the road. Two people were arrested, apparently for just crossing the road. The police wouldn't say what there charge is. At 10:40, the TSG team started 'dealing with' the back gate blockade in a similar manner.

A Ghanian woman held at Yarl's Wood, who was supposed to be deported on this flight, has just had her deportation order cancelled.

"Solidarity from some random person in Hackney [in London]. No one is illegal!"

"I've read what you are doing on Twitter. You are heroes! Thank you all! Solidarity! I would come [and] help, but i'm not in London at the moment. I'm following the happenings on Twitter and helping to spread the word."

"Big up to all taking part in the blockade. Love from Liverpool."

And quite a few saying 'Well done', 'Good luck' and such like.

A while ago protesters at the front gate were pushed very violently and kettled by police, allegedly to prevent breach of the peace. It looks like they are being held until the lock-ons are cut.

Around 1am, some of the lockons at the front were broken up and a coach carrying a few deportees squeezed past heading to the airport. All nine locked on at the front have been arrested. Those round the back released themselves and left without being arrested after hearing that the coach had left. 11 arrests in total, the number of deportees unknown yet.

Just as the coach carrying the Ghanaian deportees left Harmondsworth, the action's press team were supposed to be doing an interview with BBC Radio 5 Live about the action, its aims and developments. The editor then called to cancel the interview, because she had apparently been informed by the police that the coach had left and everything was back to normal. No story any more. People being forcibly deported is not as sensationalist as a bunch of 'trouble-makers' blocking a road and causing chaos.

News about people on the flight and inside Harmondsworth

A detainee at Harmondsworth confirmed this morning that the coach which left last night had taken the deportees with it to the airport.

He said many people on the flight had not been issued travelling documents, but they were still deported.

He thanked everyone for taking part in the protest, especially the people who got arrested, and said that people in the detention centre had heard what had happened.

Hopefully in the next few days there will be news from the people who were deported to Ghana.

In all, I'd say the blockade involved 40+ people, front & back exits.

Some got their flight cancelled, whilst others were deported - still trying to ascertain how many got taken off.

The coach operator, as always, was *WH TOURS*.

The one consoling aspect was that detainees were well aware of what was going on. The coach passed the remaining blockaders, and there was an emotional moment as it passed by all the kettled supporters at the front...detainees waved and raised fists as activists shouted 'No Borders, No nations, Stop deportations!' from inside the scrum.

The coach was followed by three *Reliance* vans in convoy, taking other nationals either to be deported or transferred to other detention centres.

We understand that at least one other person was taken off a seperate flight to legal action taken during the 7-hour blockade.

Details of the blockade as it happened:

I'm a No Borders activist and backed this action 100%. Last night I read a comment on here from someone who had a problem with the concept of no border controls. It reflected the thoughts of many people in the UK with worries over jobs, health care etc and how that can square with the idea of having no borders. It set out the arguments against, in an honest way and while it went against everything I believe in, i also know that the reasoning behind the No Borders movement is robust enough to be able to counter the arguments in a compelling way.
I'd like to know why the comment was hidden. Smothering dissent, however misguided, can't be right can it? I'm also solid enough in my own understanding, research and experience to not be afraid of meeting opposite opinions.

a no borders person

https://lists.indymedia.org.uk/pipermail/moderation/2012-February/date.html
...which they use to report and discuss moderation decisions.

Whenever an entire article is hidden it's meant to be reported to the whole collective via that list with the reason (ie which of the guidelines it has broken). I think perhaps with comment hiding they are less strict about having to report it and give a reason. As far as I can see the hiding of that comment wasn't reported on the list.

Still, if you wanted a dialog/reason from the person who hid it, that's probably the best place to ask. Email:
moderation [at] lists.indymedia.org.uk

Personally, I feel similarly to you; that hiding should only occur in extreme cases. But there are a variety of opinions about it; some people would prefer such comments be hidden rather than have to read through reactionary opinions.


Was this the comment signed "Daily Mail reader" and constantly referred to how everything 'would' effect them individually?

I guessed it was parody. Maybe just to close to the bone to be obvious. No idea why it was hidden though.