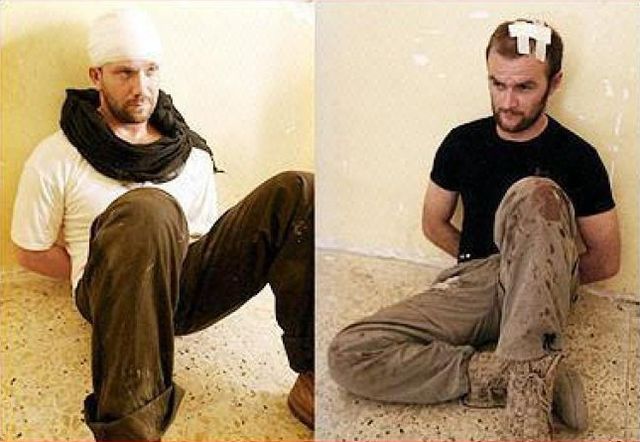 Flashback to 2005: Two undercover British Special Air Service (SAS) soldiers had been caught red-handed by the British government’s alleged allies, the Iraqi police, dressed as Arabs, replete with wigs and armed to the teeth and in a car which was packed with explosives, Basra, 19 September 2005

"These reports confirm unequivocally [they're illegally] interfer[ing] in the affairs of a sovereign state. This is not a popular uprising. The insurrection as well as the killings of civilians were sponsored by the Western powers from the outset."

More on this below. Events replicate the Libya model a year earlier.

"....British special forces were deployed on the ground in order to help the UK'S allies - the Libyan 'revolutionaries' often called the National Transitional Council or NTC."

Knowledgeable sources said "they did a tremendous job" conquering Libya. "The existence of E Squadron is well known within the special forces community but has not hitherto been discussed publicly. It was formed five years ago to work closely with the intelligence service MI6, and is mainly involved in missions where maximum discretion is required, say Whitehall insiders."

Composed of SAS, SBS, and Special Reconnaissance Regiment forces, it "often operates in plain clothes and with the full range of national support, such as false identities, at its disposal."

"It is understood that just under 250 UK special forces soldiers have been in Libya since before the launch of air strikes to enforce the no-fly zone against Gaddafi's forces."

Another hundred or more were on standby. They were comprised of Special Forces Support Group (SFSG) paratroupers drawn from the SAS (Special Air Service) and SBS (Special Boat Service). They were resupplied from Cyprus. Moreover, 800 Royal Marines were "on five days notice" to deploy to the Mediterranean.

Last March, six squadron members were caught red-handed. Dropped in by helicopter, they were dressed in black, well-armed with weapons, explosives, maps and false passports. Britain claimed they arrived to protect diplomats and monitor events in Benghazi, not military operations.

An official Ministry of Defense statement said, "We neither confirm nor deny the story and we do not comment on the special forces."

The Libyan model's being replicated in Syria, so far short of bombing. Expect it if current tactics don't achieve regime change.

"British and Qatari troops are directing rebel ammunition deliveries and tactics in the bloody battle for Homs," according to the Mossad-connected DEBKAfile.

On February 8, it reported:

UK and Qatari "special operations units are operating with rebel forces under cover in (Homs), according to DEBKAfile's exclusive military and intelligence sources."

Allegedly not engaged in fighting, they're tactically aiding and abetting foreign insurgents illegally against a sovereign government.

DEBKAfile reported an Ankara plan to send Turkish/Arab forces to Homs and other "flashpoint cities." Earlier, Assad said full-scale war would confront Turkish or other forces if they invade.

Details of "a three point plan to force" out Assad "were signed off yesterday" at a National Security Council meeting.

According to a Whitehall security source:

"The training is taking place on a one to one basis with opposition leaders outside Syria." No further information about direct intervention was supplied.

Washington debate shifted from diplomacy "towards more robust action since Russia and China blocked" Security Council action. "Any plan to supply aid or set up a buffer zone would involve a military dimension to protect aid convoys or vulnerable civilians."

"The Pentagon Central Command has begun a preliminary internal review of US military capabilities in the region" to provide options if ordered. An unnamed senior US official said "increasingly it looks like (military intervention) may not be avoidable."

Planning for a military campaign "is well underway. It could be a logical conclusion of those military and propaganda operations, which have been carried out by certain Western countries against North Africa."

Rogozin added that NATO plans intervening only against those regimes "whose views do not coincide with those of the West." As a result, he envisioned a possible "large-scale war in this huge region."

The business of America is permanent wars for unchallengeable wealth, power, and dominance, while homeland needs go begging.

Obama's a war profiteer front man. He plans them while talking peace. Ravaging Afghanistan continues. Thousands of US troops remain in Iraq. Others were repositioned nearby. Increased numbers were added to establish a larger regional footprint, combining air, ground, and naval units for future combat operations.

However, proxy operations may develop that way whether or not intended.

Washington wants total regional dominance. Nothing's off the table to achieve it.