The UK has been instrumental in consolidating relations between the disparate and isolationist opposition groups in Syria—not because the British elite want genuine democracy, of course, but because Syria’s President Assad would not acquiesce to the neo-liberal economic policies of the Broader Middle East and North Africa Initiative (BMENAI). Unlike Iraq and Libya, Syria does not have significant quantities of strategic resources to make worthwhile a NATO-led invasion. As a result, Assad’s country must be destroyed via UK-trained militias so that it can be rebuilt along Euro-American-approved lines. 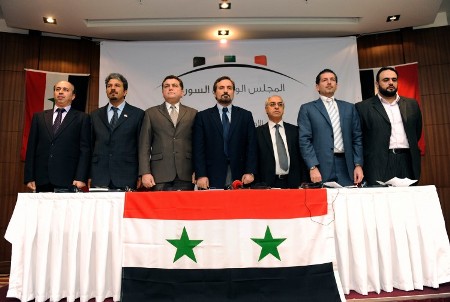 The Syrian National Council, a puppet government installed by the UK when they announced their formation on August 23, 2011


The UK has been instrumental in consolidating relations between the disparate and isolationist opposition groups in Syria—not because the British elite want genuine democracy, of course, but because Syria’s President Assad would not acquiesce to the neo-liberal economic policies of the Broader Middle East and North Africa Initiative (BMENAI). [1] Unlike Iraq and Libya, Syria does not have significant quantities of strategic resources to make worthwhile a NATO-led invasion. [2] As a result, Assad’s country must be destroyed via UK-trained militias so that it can be rebuilt along Euro-American-approved lines. According to an Economist Intelligence Unit report cited in the UK House of Commons Library in 2009,

"The main element of the [BMENAI] agreement is the development of free trade for all goods other than agricultural exports to the EU. Syria will immediately gain tariff- and quota-free access to the EU market, while Syrian tariffs on imports from the EU will be phased out over the 12 years. The agreement will also open the way to increased EU aid to Syria [which means debt], although the EU has already provided substantial support for development projects and economic reforms since negotiations started in the late 1990s." [3]

However, a UK House of Commons Library update in 2011 lamented that Syria’s President Assad,

"was thought to be a reformer …. Limited cooperation was achieved, but a visit in 2000 by Tony Blair to Damascus went badly wrong when [Assad] made some very critical remarks to Mr Blair’s face on camera. [You don’t insult the Godfather’s errand-boy] … Economic reforms were enacted, leading to the reduction in subsidies for some staple goods, but the economy is still dominated by the state and suffers from many of the same problems as its neighbours: stagnation, low productivity, corruption and high unemployment." [4]

The latter point is not an expression of concern for Syrians, but rather, it means no taxes for collection by the likes of the UK’s Department for International Development (which is grabbing land in Rwanda and collecting taxes in Afghanistan, like all good instruments of colonialism). In October 2011, the UK’s Middle East Minister Alistair Burt said that “The establishment of the Syrian National Council” (SNC), an organisation which opposes Assad,

"marked a positive step in bringing together a broad range of Syrian opposition [sic] representatives. I was therefore pleased to meet SNC members … out the importance of establishing a shared vision for the future of Syria and a credible plan of how to move peacefully to an alternative political system. I welcome this, and his belief that any change should be Syrian-led and non-violent. It is crucial for all Syrian groups to be represented in any future opposition body in Syria." [5]

One month later, the Telegraph newspaper reported that “At the meeting” between the SNC and the UK-installed Libyan puppet government,

"the Syrians requested “assistance” from the Libyan representatives and were offered arms, and potentially volunteers. “There is something being planned to send weapons and even Libyan fighters to Syria,” said a Libyan source … “The Libyans are offering money, training and weapons to the Syrian National Council,” added Wisam Taris, a human rights campaigner with links to the SNC. The disclosure came as rebels raided an air force base outside the city of Homs ... Rebel attacks have become daily occurrences since the onset of the insurrection." [6]

This dispels the “commitment to non-violence” guff pedalled by politicians and the uncritical media. The rebel attacks have been barely reported in the West. Assad’s brutal responses and mass murder of civilians have been adequately covered by, for instance, the BBC and (the now Westernised) Al-Jazeera.

By contrast, comparable atrocities committed by Yemen’s President Saleh, for instance, were whitewashed by the aforementioned organisations, and even vindicated. [7] This is because Saleh agreed to the economic liberalisation plans of the BMENAI back in 1997, but Assad did not. [8] (In those days, it was called the Euro-Mediterranean Partnership Initiative. America called it the Greater Middle East project. In 2004, America and the EU merged their parallel plans). [9] On 5 January 2012, the following gem was posted on the official Elite UK Forces’ website—and, predictably, it was ignored by the media:

"Reports from late November … state that British Special forces have met up with members of the Free Syrian Army (FSA), the armed wing of the Syrian National Council. The apparent goal of this initial contact was to establish the rebel forces’ strength and to pave the way for any future training operations. More recent reports have stated that British and French Special Forces have been actively training members of the FSA, from a base in Turkey. Some reports indicate that training is also taking place in locations in Libya and Northern Lebanon. British MI6 operatives and UKSF (SAS/SBS) [UK Special Forces {Special Air Service/Special Boat Service}] personnel have reportedly been training the rebels in urban warfare as well as supplying them with arms and equipment. US CIA operatives and special forces are believed to be providing communications assistance to the rebels." [10]

Turkey was also targeted for BMENAI economic liberalisation in 2004. [11] Turkey Prime Minister Erdogan is probably afraid that if he doesn’t appease his Euro-American masters he will be overthrown. This explains both his likely acquiescence in allowing UK forces to train Syrian rebels in Turkey, and his laughably hypocritical condemnation of Assad’s violence.

“What average Syrians of all ethnic groups say about this is that they are being shot at by snipers. People complained that there are terrorist snipers who are shooting at civilians, blind terrorism simply for the purpose of destabilizing the country. I would not call this civil war – it is a very misleading term. What you are dealing with here are death squads, you are dealing with terror commandos; this is a typical CIA method. In this case it’s a joint production of CIA, MI6, Mossad, it’s got money coming from Saudi Arabia, The United Arab Emirates and Qatar” -- William Tarpley on RT News.

The UK-Libya-Syria triad is especially interesting given the details of the Telegraph report. Clearly, Libya is a conduit for UK arms and money. Also significant is the Daily Mail’s one-line revelation that MI6 operatives had been training anti-Gaddafi opposition forces at least six months before the armed uprising in Benghazi, which according to leaked sources had been planned (and attempted) in 1996. [12] The Libyan Islamic Fighting Group thugs—and their friends—are largely terrorist holdovers from the 1980s, when MI6 and the SAS were training and arming them in Afghanistan. (They are good “al-Qaeda”, Bin Laden, if he really is dead, was bad “al-Qaeda.”) [13]

Britain’s links with unpopular but Western-friendly Syrian opposition forces go back a long way. The most verifiable is the exile of the Syrian Muslim Brotherhood leader Ali Sadreddine Bayanouni in 2000. “Opposition activities in Syria are clearly mounted from London,” former Chatham House Fellow Mark Curtis wrote in 2010. [14] In late-2011, the London-based, pro-Israel, Next Century Foundation (headed by the likes of Lord Morris) stated that continuing London- and Germany-based Muslim Brothers may be destabilising the SNC, which the Syrian Muslim Brotherhood seems to want to dominate. [15]

The Syria atrocities and the rest of the region’s turmoil are part of the Broader Middle East and North Africa Initiative, “the birth-pangs of the New Middle East”, as Bush II’s then-National Security Advisor (and psychopath) Condoleezza Rice called Israel’s 2006 dropping of 3 million cluster bombs onto Lebanon. [16] The BMENAI is itself just a small part of the quest for a New World Order [17], which is guaranteed by the doctrine of Full Spectrum Dominance. [18]

2. NATO’s self-appointed mandate is “energy security,” or theft if you will. For details, see my “More Blood for Oil? Libya and the UK”, Palestine Telegraph, 4 March, 2011.

7. For Saleh’s atrocities, committed with UK arms, training, and diplomatic support, see Amnesty, “Protesters attacked as Yemen steps up crackdown”, 18 February, 2011, and Human Rights Watch, “Yemen: Excessive force used against demonstrators”, 9 March, 2011. For examples of vulgar apologetics, see BBC News Online, “Yemen security forces open fire at Sanaa protest”. Numerous BBC Online articles repeated this statement verbatim (or slight variations of it): “The president [Saleh] has been [in] power for 32 years, facing a separatist movement in the south, a branch of al-Qaeda, and a periodic conflict with Shia tribes in the north”, as if we’re being invited to condone his slaughter. The same could be said of Assad, who faces occupation and attack by Israel, a flood of Iraqi refugees, US-UK forces on the boarder (in Iraq), a separatist movement in the country (the Kurds), and the Western-linked Syrian Muslim Brotherhood organising insurrections. Only a moral coward would assert these facts to justify Assad’s murder of civilians, yet the BBC did so for Saleh. The reason is simple: Saleh agreed to the EU’s economic plan, Assad did not. Examples of hypocrisy go even deeper if we care to look: Yemen is not only experiencing that which the BBC reported, but also a flood of Somali refugees fleeing UK-funded terror, a point which the BBC omitted, as well as invasions by Saudi forces who are trained and armed by the UK, including their use of attack jets—again, not mentioned.

8. For example: “Except in Syria and Libya, economic liberalization has been an integral part of the policies of Arab governments at least since the early 1990s.” Marina Ottaway and Amr Hamzawy, “Political Reform in the Middle East: Can the United States and Europe Work Together? ”, Democracy and Rule of Law Project, December, 2004, Washington, DC: Carnegie Endowment. On Yemen: “The European Union has allocated 61–70 million euros in aid for Yemen for 2002–4. The commission is planning to open a delegation in Sanaa” in 2004, having agreed a reform deal in 1997. Mona Yacoubian, “Promoting Middle East Democracy”, Special Report 127, October 2004, Washington, DC: United States Institute for Peace.

10. UK Elite Special Forces Website, “British Special Forces Training Syrian Rebels?”, 5 January, 2012, The disgraceful website also features book- and even jacket-promos for the mercenary assassin units. Murdering people isn’t enough for them, they also need trophies (like serial killers). But even lower than serial killers, the Elite Forces profit from their trophies by selling them as books and DVDs.

12. Tim Shipman and David Williams, “SAS rounded up and booted out as Libyan mission turns to farce”, Daily Mail, 7 March, 2011, The article is a damage-limitation piece published after a bungled SAS mission to meet Gaddafi’s opposition. However, it contains the following information concerning a certain “Tom, a British man who had been working on the [training camp] farm as its administration supervisor for the past five months” (since October 2010), who “is in fact an MI6 agent.” On the 1996 efforts to install a puppet regime in Libya, see Mark Curtis, 2010, Secret Affairs, London, Serpent’s Tail, p.222-36.