No Borders Communique to Immigration Prisoners

To all our brothers and sisters locked up in Immigration Removal Centres,

You are not forgotten!

This is a communiqué from the 'No Borders Network' 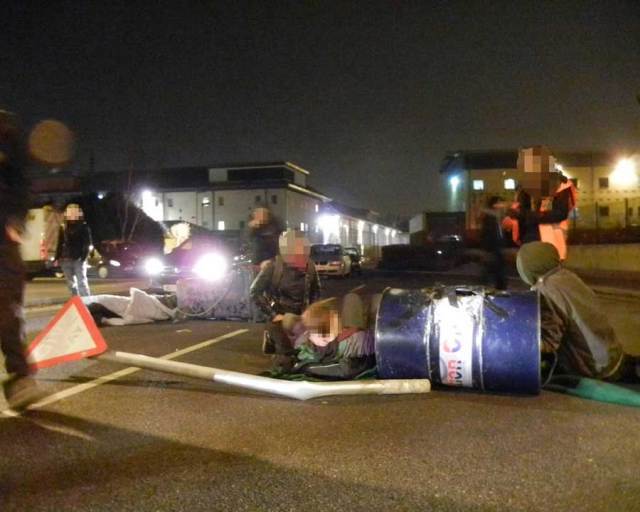 Harmondsworth and Colnbook: both exit roads closed for 7-hours by protestors

We want to tell you about something that happened on Valentine's Day, Tuesday 14th February 2012, at Harmondsworth and Colnbrook 'Immigration Removal Centres', near Heathrow Airport.

Harmondsworth is the biggest migrant prison in Europe, with 600 people trapped inside. Next door is Colnbrook, another detention centre with very high security, where 300 people are locked up.

At 6 o'clock in the evening, 12 militants blocked the exit roads outside these detention centres. They put heavy concrete blocks in the roads, and chained their arms together inside them. This stopped coaches and prison vans from taking people to the airport. That night, the UK Border Agency wanted to do a mass deportation (“charter flight”) to Ghana. The militants wanted to stop it. They were joined by 50 supporters, who had come from across Europe – from Scotland, Belgium, Germany, France...

The prison guards tried to scare us away with their dogs. Then the police started to arrive, even riot cops. But we keep the exit roads shut for 7 hours, and shouted slogans in different languages.

We knew of about 18 people inside Harmondsworth facing deportation to Ghana that night. The charter flight could take 50 people in total, from all the different detention centres in Britain. The plane was scheduled to take off at midnight from Stanstead Airport, a 2 hour drive from Harmondsworth. The blockade delayed the coach from getting to the airport for several hours and caused the flight to take off late. This delay won time for more legal challenges that got at least 2 Harmondsworth detainees taken off the flight. The blockade also stopped a man being deported to Sri Lanka that evening on a commercial flight, because the Reliance prison van could not drive him to the airport. Both Ghanaian women at the Yarl's Wood Immigration Removal Centre had their tickets cancelled through their own legal challenges.

All night, we talked with our friends locked up inside, telling them what was going on outside. Detainees said they were happy there was a protest happening and thanked everyone for coming along. Organisations and individuals sent lots of messages of support. Some journalists printed stories about the blockade in newspapers like "The Guardian" and "The Independent", and it was on the BBC.

The blockade ended at 1 o'clock in the morning. The police got a special squad to cut through the concrete blocks, and then dragged the militants away. 11 of us were arrested, but 3 militants managed to escape. Then we saw the coach driving out, hired from a company called “WH Tours”, followed by 3 prison vans. We were angry and sad, even though we had tried very hard to stop it.

The arrested comrades were kept in the police station for 36 hours. Supporters travelled to the court room for their court hearing. More riot police were waiting outside and made trouble for the people visiting the court room – 1 more person was arrested. Eventually, on Thursday evening, all the militants were released on bail. They have to come back to court on Monday 8th March, to face charges of 'obstructing the highway' (this means blocking a road) and 'section 14' (which is when the police try to ban your protest but you ignore them). But these charges are not serious and we think the police will lose in court. In fact, we think what the police did was illegal, and we can even take them to court.

We will keep supporting the people who were taken off the Ghana charter flight. They are still locked up in these horrible detention centres, without proper medical treatment or legal advice, away from their families and friends. And as for our friends who were deported, you are not forgotten either. We hope to stay in contact and keep supporting each other. When people who get deported by charter flight work together, the resistance movement gets stronger. In some countries, like Mali and Iraq, there are “associations of deported people” that organise protests in these countries against deportation. These have become very successful campaigns.

We can't blockade every charter flight, but there are many different ways to fight the Border Agency and stop deportation. Our struggle continues!