A barn has been squatted in the middle of the proposed Hinkley Point C development site. Activists are reclaiming the land for wildlife and future generations before preparatory works trash this environmentally sensitive site and turn it into the biggest building site in Europe. 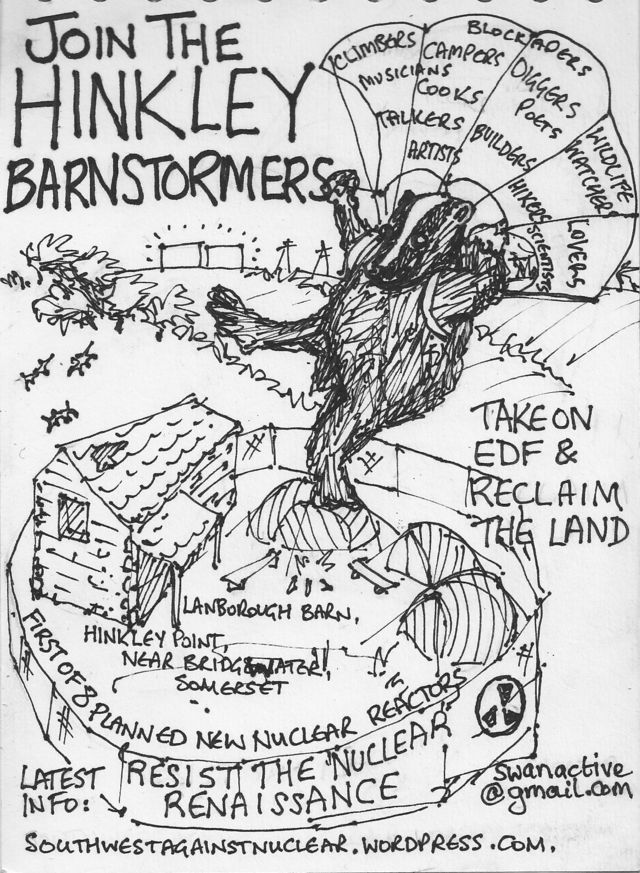 The barn, Lanborough farm, is accessible by public footapaths and the camp is currently protected from immediate eviction by section 6 squatting law. Visitors are welcome, whether for the day or for longer stays. Bring a warm sleeping bag!

We are quietly sharing the space with bats who roost in the barns. Edf is preparing to evict the bats to an artificial roost when they knock down the buildings, in the same way as they have shifted the local badgers to a concrete 'Badger Gulag' at the edge of the site. However, ecologists say that there is no evidence that this form of wildlife resettlement is effective, and that it is simply part of the company's greenwash.

Preparatory works are about to go ahead, despite permission for a new nuclear power station not yet being granted. This will involve destruction of trees and hedgerows and earth levelling works including culverting streams and filling in an entire valley.

A recent report questioned the level of corruption involved in the government's decision to make new nuclear power part of the UK's energy mix. The decision was made contrary to the advice of DECC's own scientific advisors.

The camp has been taken a month before a large scale protest planned to surround and blockade Hinkley for 24 hours takes place on March 10th and 11th, to mark the passing of a year since the nuclear disaster at Fukushima in Japan started.