Nuclear energy company EDF today served papers on activists occupying a farm on the proposed site for nuclear new build at Hinkley Point in Somerset. The papers, served by Squire Sanders of London, are applying for possession of the premises and, in an unprecedented move, an injunction against all future protests at this site: this includes any protests by other local residents, such as campaign group Stop Hinkley. 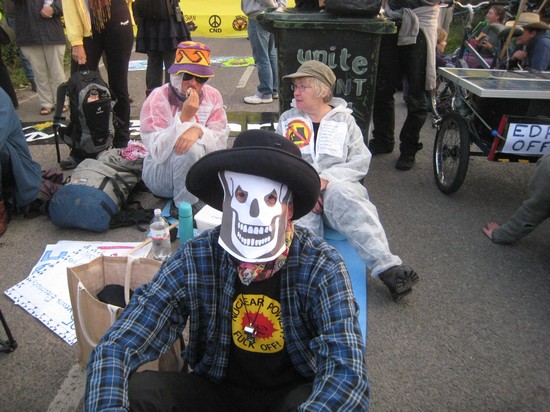 Said Shana Stone “We will fight them all the way this isn’t just about Hinkley Point, it’s about defending democracy, the rights of future generations and the entire direction of Britains energy policy”

Although EDF have obtained permission to remove all historic building, sites of special scientific interest and most importantly the vegetation which includes ancient hedgerows and veteran trees, this all comes before they actually have permission to build the 500ha site.

Theo Simon one of the occupants named in the papers said “EDF want to silence all protest at the site, but what is happening here is a complete perversion of the democratic planning process. For this corporation to be given the green light to destroy our common natural heritage before the public scrutiny of their plans is finished is an absolute scandal”

Another person named in the papers, local resident Nikki Clark said “Make no mistake the UK government and the french government via EDF are in collusion on this issue, as has been demonstrated by the freedom of information requests made by the Guardian and Caroline Lucas MP last year. These papers tell a lot about what the Anglo-French governments think of our fundamental human rights to freedom of expression & freedom of assembly and association. It’s bad enough that our right to a public inquiry has been removed in favour of a process designed to steamroller this fraudulent energy policy through. But their attempts to criminalise our legitimate right to protest now and in the future, through an injunction is a disgrace. We aren’t surprised at EDF playing dirty – with two of it’s employees, languishing in jail for spying on protestors it looks like they’re trying to get their revenge.

Occupier Jesse Smith said “All economic activity creates jobs we just have to choose the kind of jobs we want. Nuclear power is not safe, not clean and not necessary as is demonstrated by the government’s own evidence. This government’s energy policy is a joke, it’s not about keeping the lights on or energy security, it is about sustaining the unsustainable.”

The persons named and unnamed, will appear in court on Monday 27th February in the Royal Courts of Justice in London and are expecting a large demonstration of support local & national outside the court.

All media enquries to:

dv for South-West Against Nuclear