On Wednesday 15th students from around the country joined students from Birmingham to protest the injunction the university has obtained banning all forms of occupational protest for 12 months. The university has been heavily criticised by human rights groups including Amnesty, Liberty and the Index on Censorship calling the actions aggressive and censorious. Sabina Frediani, campaigns co-ordinator for Liberty has been quoted as saying “Universities should be places where ideas and opinions can be explored and they should be engaging with the students in their care – not criminalising them. How exactly will taking out court orders against protest encourage future applications from aspiring undergraduates?”

The march started at the guild of students and several attempts were made during the march to gain access to various buildings on campus but were stopped by the overly aggressive security who had the backup of police, on standby around the campus. The route of the A to B march was quickly abandoned in favour of something a bit more impromptu and resulted in a demo outside the building where the disciplinary hearing was taking place for Simon Furse, the only student in the country to be disciplined by a university for taking part in an occupation. The disciplinary had already been disrupted once earlier in the day as a group of students stormed the room and read out statements.

The march continued on in an impromptu fashion after this until a door with no security was found, at which point the march became an occupation, breaking the injunction. The building in question just happened to be the University’s Corporate Conference Centre in Staff House which was occupied in November, the first in this latest round of occupations. 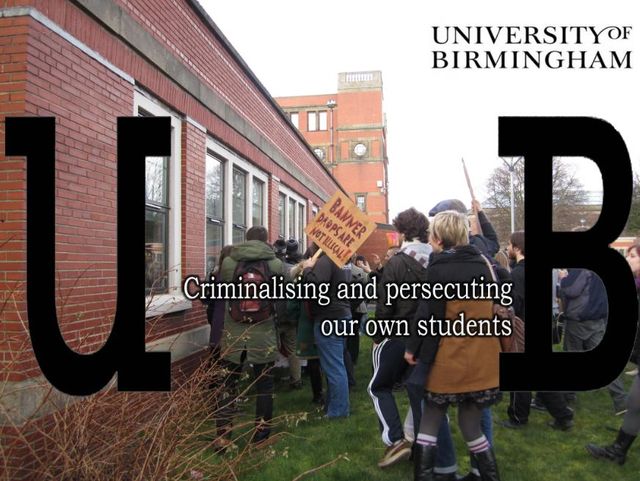 The demonstration, supported by NCAFC was a protest against the actions taken by the university against the freedom to protest on the campus and the human right of freely expressing discontent. This is something the university management has been widely criticised over, the repressive regime headed by vice chancellor David Eastwood, has received a fair share of bad publicity recently including anger over Eastwood’s ever increasing outrageous salary (he’s one of the highest paid VC’s in the country) compared to the pay cuts most of the staff are facing and the tripling of tuition fees faced by students.

It was also an act of defiance over the disciplinary action taken against Simon Furse, who was the only student identified, thanks in part to the collaboration of the student Union President Mark Harrop with university management, as taking part in the previous occupation. As a result he is the only student in the country being disciplined and victimised by their university for taking part in an occupation. The same occupation which also resulted in the injunction being obtained. The disruption of the disciplinary, which had the power to expel him, resulted in it being cancelled meaning the disciplinary process must now restart from the beginning.

By re-occupying it shows the students don't fear the university's scare tactics or the prospect of a disciplinary and are prepared to break the injunction, face arrest and all the consequences that go with that.