Urgent: This Saturday 26th February, we will be laying a wreath at the International Brigades Memorial, Jubilee Gardens SE1 at 1pm to commemorate our fallen comrade. We encourage all antifascists and radicals to join us. 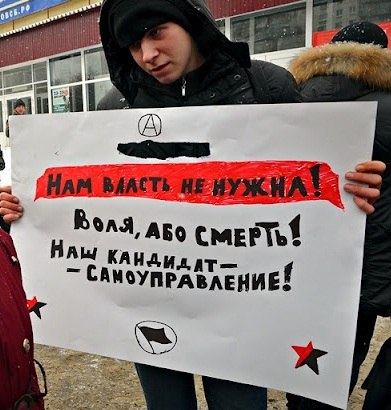 On the 9th of February 2012, a caretaker at the "FIAN" institute found the body of 21-year old Anarchist & Antifascist Nikita Kalin. He had been stabbed 61 times, suffered a head wound and multiple fractured ribs. Police arrested a suspect in connection with the murder, a nazi activist, who had been found with Nikita's blood on his clothing. However, fascists seldom work alone.

Due to the Police's handling of the case, Russian Antifascists believe the Police will attempt a cover-up, as is often the case in Russia. Despite this, the suspect has already hired a lawyer.

Nikita's family and friends have a lawyer from a human rights organisation, but they still need money to help pay for the funeral. If you cannot make it to the memorial demonstration, please consider donating to the funeral fund via Moscow Anarchist Black Cross:

After the fascists scored a major victory on the streets of Liverpool last weekend, it's important everyone turn out for this show of solidarity and strength. Lets show Nikita's family and friends that they are not alone in the struggle, that we will never let fascism force us into submission and obedience. Bring flags, banners and placards . Never surrender to the fascist scum!

Sorry, it's Saturday 25th February, not Saturday the 26th, as originally posted.

How many Anarchists did the IB

It is a terrible tragedy that another young comrade has been taken from our movement by our enemies. Unfortunately, it is also a tragedy that some Anarchists in this country are so appallingly ignorant of their own history that they think the memorial of the Stalinist International Brigades, who were involved in the wholesale slaughter of Anarchist antifascists in Spain and Catalunya, is a fitting place to pay tribute to our murdered comrade. Perhaps it would be better to spend the day in quiet reflection, reading some elementary Anarchist history and avoid insulting the memory of the fallen.

let people have the freedoms to do as they want

I think the tradegy is people seeming to think they have the right to tell other people what they can and can't do. If you don't like it then fuck off no one is forcing u to go.

Is that the best reply you can come up with Jule? Pathetic.

Very trajic news, but antifascist is correct in what he says. Russian comrades won't like this, they suffered Stalin too of course. Also in respect of Moscow ABC, I sent money before and it was 'problematic', maybe there are more direct contacts? Or there is worthy cause here -

Following up on "Antifascist's" suggestions, the above choice of monuments was not the best.

Many international volunteers went to Spain to fight against Franco and in defence of the libertarian revolution. Unfortunately many did not return including not only those killed by the fascists, but the counter-revolutionary forces of which the International Brigades were part. Anarchists should not allow themselves to become part of this dreadful betrayal. An alternative location must be found.

Communists I know have told me they don't know whether to be angry or laugh when they see anarchists turn up at the IB memorial.

Jule, your post above makes me cringe, you sound like a petulent child! If you are involved in organising this event no wonder so little thought has gone into it. We are not liberals, we are anti-fascists and Anarchists. If you cannot respond to a serious point more intelligentally and without throwing a tantrum, don't post. This event was undoubtedly well-meant, but it is ill thought out (you couldn't even get the date right). How about a short talk and 2 minutes silence outside the Bulgarian embassy when we picket in support of imprisoned antifascist Jock Palfreeman?

Not everyone who faught in the IBs were stalinists. Although communist parties did the majority of the recruiting, it doesn't mean everyone they recruited supported stalin. Dependant on the country up to half of those recruited weren't even communist party members.
Many were commited to protecting the workers revolution and fighting facism, rather than loyal to stalin or his party. around 3500(aprox 1/10th) were allied with the POUM & CNT.

Many (including foreign communist party members) were completely ignorant of the political realities in spain, including the suppression of the revolutionary workers by the stalinists/popular front. Only a relatively small percentage were ever involved in repression and fighting the trotskyists or anarchists. Some of those that were swapped sides and faught with the revolutionaries once they realised that the propaghanda they had been fed about them being secret facists was false.

So yes the IBs were controlled by stalinist agents, who did use them (not always sucessfully) to fight genuine revolutionaries. The vast majority of those that actually faught and died in the brigades were commited to antifacism and protecting the workers revolution.

I don't live in london, and haven't seen its memorial so don't know who's names appear on it, I certainly have no problem standing by those on my local brigades memorial however.

I agree with most of what you say AF, not everyone who ended up in the IB was a Stalinist, some desserted and were shot for doing so, others were murdered for their politics. Many were also quite prepared to execute Anarchists and POUM people and/or to assist in burying the truth and spreading lies about Anarchism. The exclusive IB memorials with their cant about democracy are part of that. Those betrayed and murdered in Spain must be turning in their graves at the ignorance and sheer insensitivity being displayed here. This is supposed to be a memorial event for a murdered Russian Anarchist.

I don't let the international brigades off so lightly, they were part of the conspiracy to starve the people's militias of guns and supplies and force/blackmail them ioto militarization, of the disarming of women, and ultimately of crushing the revolution. For sure they didn't make the plans themselves, but that is no excuse. Whoever thought up this event is an idiot.

You can watch an interview with an old IB volunteer (it's called 'Testament') online in which he talks of being ordered to machine-gun his own comrades.

I saw a BBC documentary in 1986 in which several scouse ex IB members openly boasted of shooting anarchists and said they were only sorry they hadn't killed more.

Massive apologies, but two times have gone out, organising difficulties.

As for all the people who have such excellently thought-out critiques, maybe they would like to organise an alternative event?

I would gladly attend. However, past experience tells me that you won't.

I also don't think that Russian anarchists will be 'insulted' that we are holding a tribute, demonstrating solidarity and having a whip-round for funeral costs.

Dialogue over, put your money where your mouth is.

Who cares what you think LA, you're quite obviously a bunch of fucking idiots who couldn't organise a piss-up outside Hackney? And if the IB were organising today, there'd be about as much chance of your making the cross-channel ferry as there is of the EDL moblilsing sober.

The fash got well turned over on September 12th 1992 at the Battle of Waterloo which is five minutes from the IB memorial so it's a close as fitting spot as any if you wanna know some history. No fucking Pasaran.