BNP and EDL in Hyde, Manchester

The EDL are in Hyde today, responding to "an alleged attack by Asian youths on two white teenagers", despite the fact that "the family of one of the victims has asked the EDL not to hold the protest and said they did not support the activities of the group". The BNP are also in Hyde, protesting with Japanese war-crimes apologist Adam Walker... 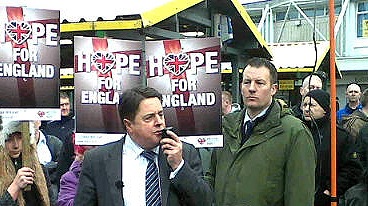 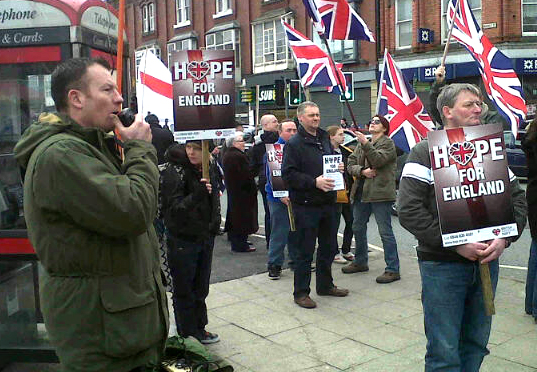 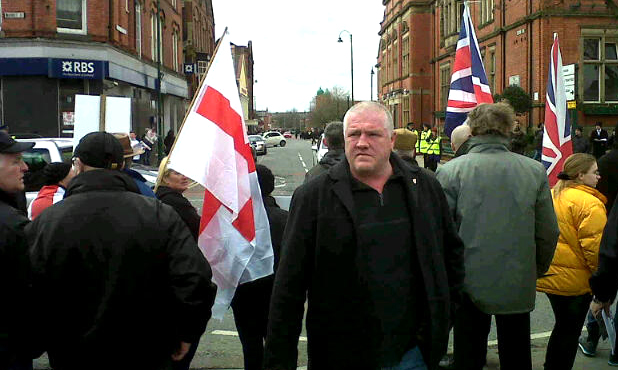 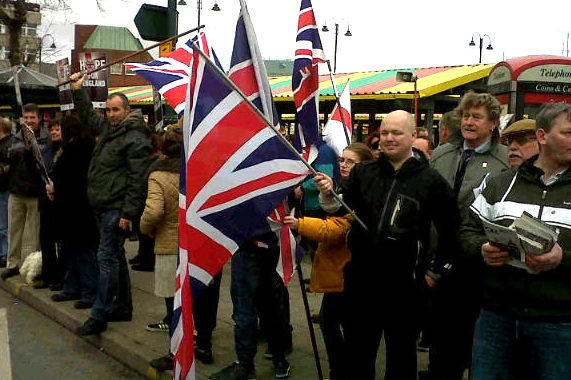 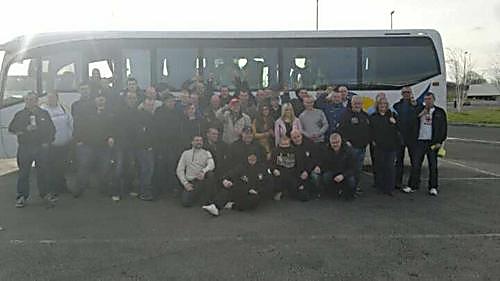 The BNP are in Hyde and in Heywood (Greater Manchester) today, handing out leaflets in a vain attempt to jump on the bandwagon after a bunch of kids broke the window of an Asian take-away in Heywood. The pretext for the attack was that the take-away was previously owned by a suspect in a child abuse scandal, the tragedy of the attack was that the shop is now under new management, so, in that sense, the attack was a classic vigilante action, targeting the wrong person for a crime they did not commit. As you can see from the You Tube clips, the original protest was tiny, hardly the white revolution Nazis have been crowing about on Stormfront, while the photos show today's BNP add-on was even more pathetic, with the presence in Hyde of BNP activist and Japanese war-crimes apologist Adam Walker (pictured next to Nick Griffin, wearing the green coat) making the BNP's fake "patriotism" even more of a sick joke

Given BNP chairman Nick Griffin and BNP founder John Tyndall both being friends with convicted paedophile Kevin Alfred Strom, and given EDL leader Richard Price and British Peoples Party activist Martyn Gilleard being convicted for downloading child porn, the far-right havn't got a leg to stand on anyway, but a couple of points to note are that the new "Hope" graphics displayed by the BNP are an obvious rip-off of the Hope Not Hate group's campaign materials, and the announcement that the BNP have just lifted what was always a totally fake ban on BNP members being involved with the EDL (the EDL is led by BNP member Stephen Lennon, Stephen Lennon was photographed at a BNP meeting, the EDL included BNP "Gold" activist Chris Renton in its leaders group, and no BNP member was ever thrown out for supporting the EDL).

As for the EDL themselves in Hyde today, it remains to be seen whether the Nazis will get a chance to kick off later on, but the Casuals United blog reports just 400 EDL in town, the BBC report a slightly less unimpressive 600, and the photo of the EDL Newcastle group boarding their (small) coach suggests the far-right aren't exactly swamped with enthusiastic support. BBC News says the EDL are responding to "an alleged attack by Asian youths on two white teenagers in the town earlier this month", despite the fact that "the family of one of the victims has asked the EDL not to hold the protest and said they did not support the activities of the group". 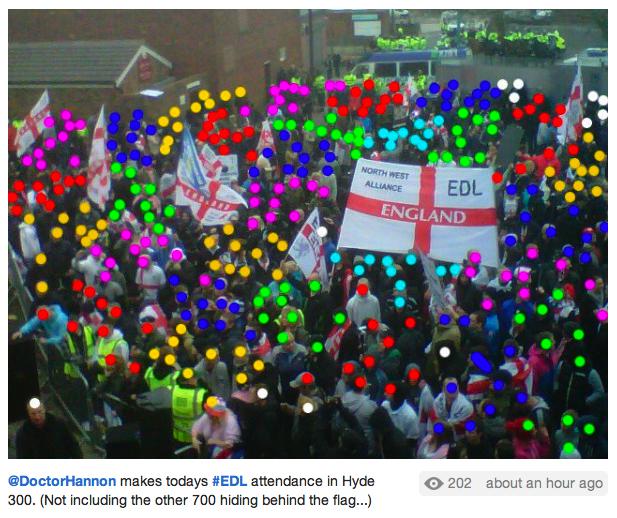 Put this in perspective, when Ajax played 1500 Dutch supporters travelled to Manchester, when the EDL play, it's debatable whether they can even pull even a third of that number IN THEIR OWN COUNTRY

Except that Ajax is a football club, whereas the EDL isn't one and they didn't play.

It will be very interesting to see how many people come to visit the Olympic Games, and how many times more this is than the EDL's paltry 300. 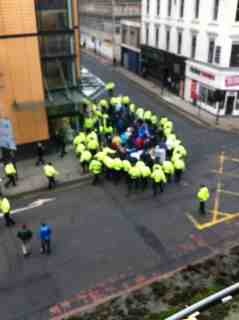 Mugshots from the EDL demo 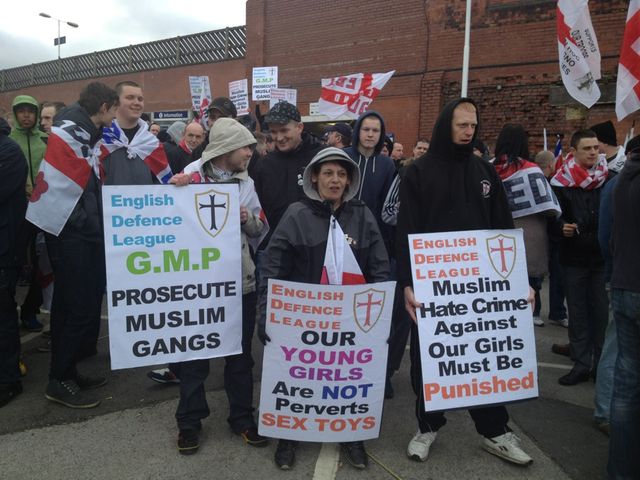 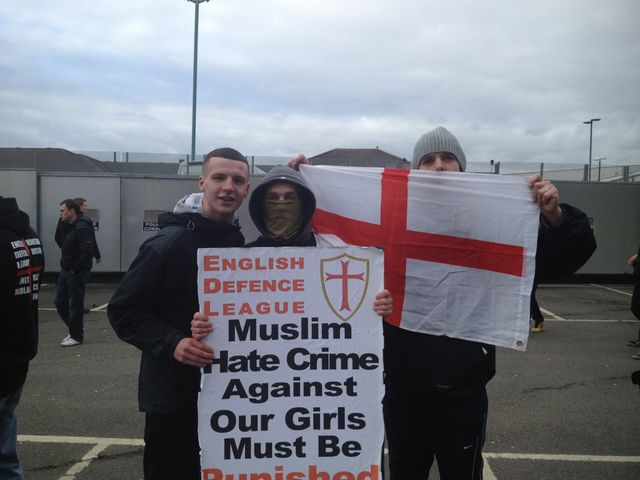 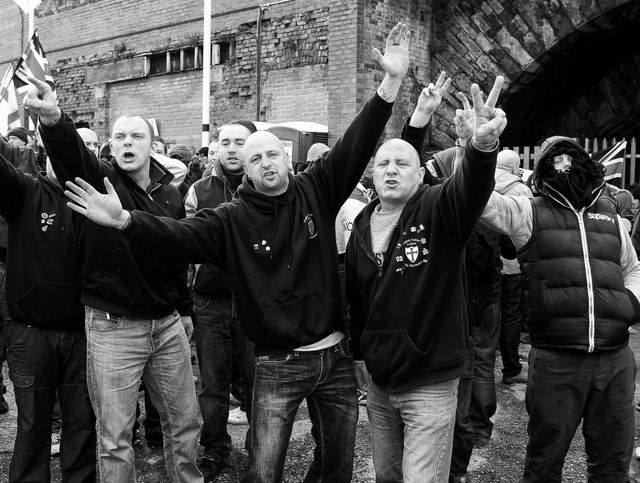 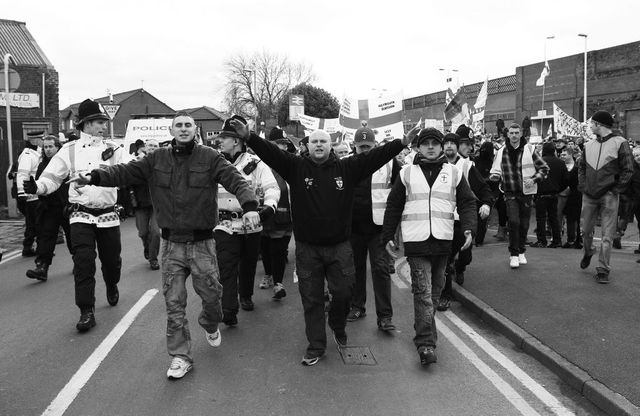 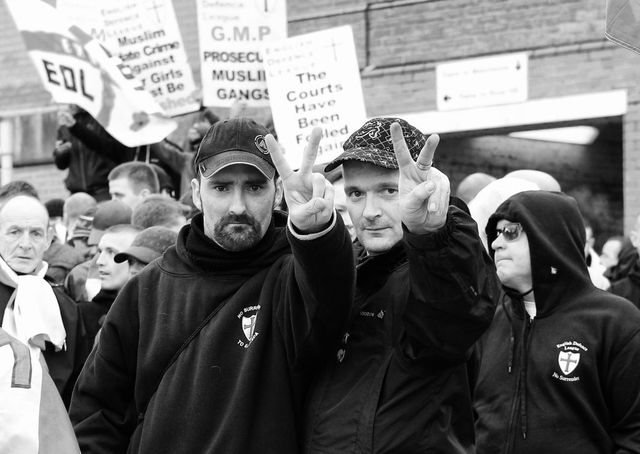 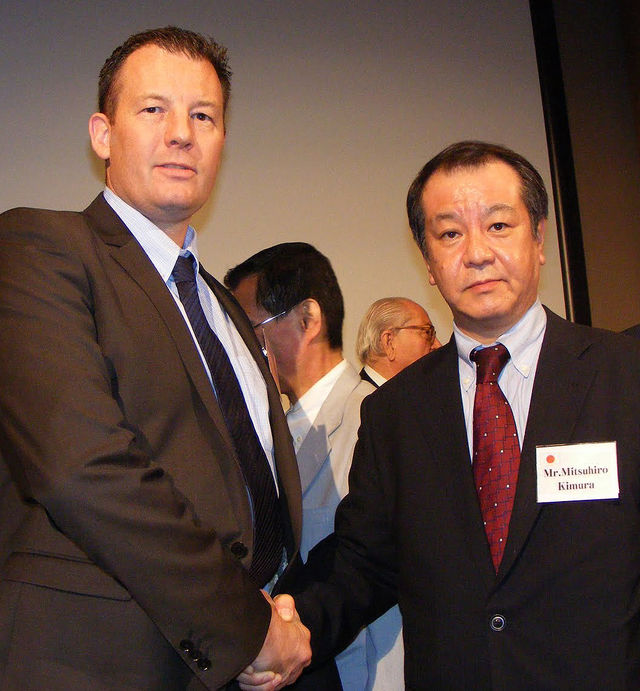 I am genuinely lost for words 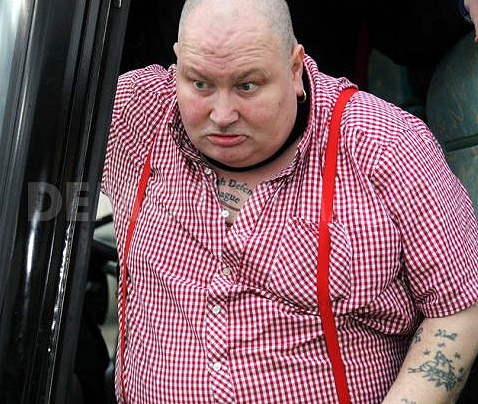 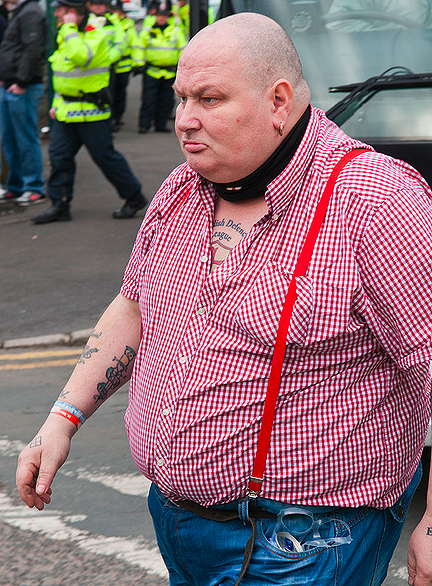 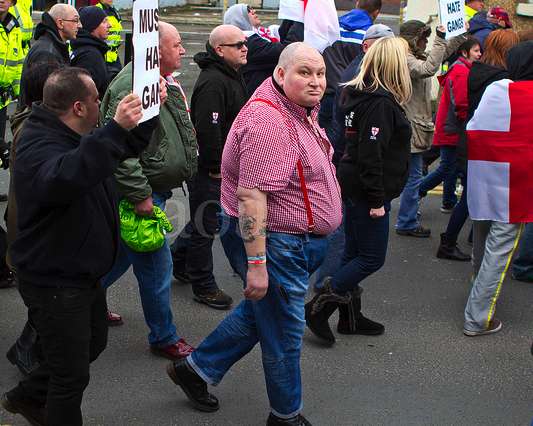 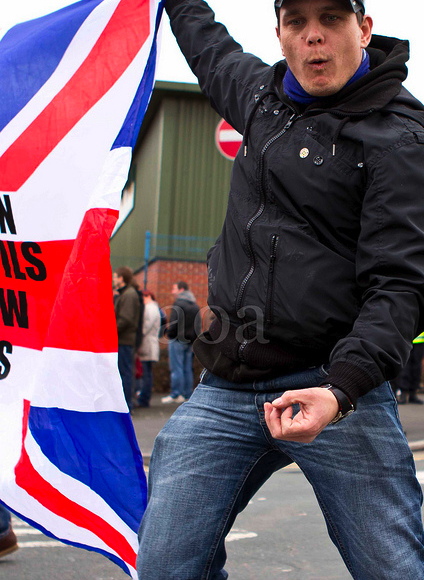 EDL vs the Left 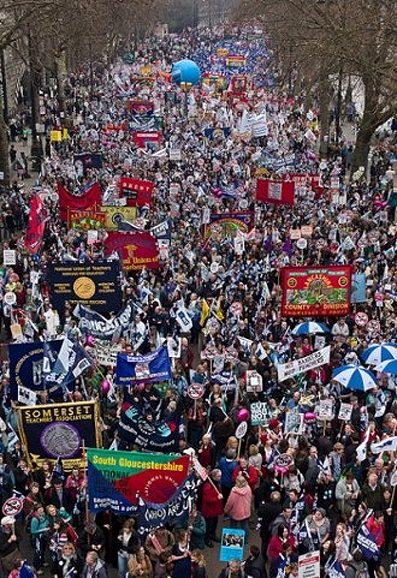 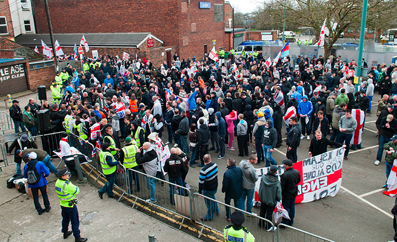 The TUC isn't a fair comparison That was a trade union thing to do with public sector jobs. They went out because they want to keep their bread buttered.

They are basically out marching for more money.

And since money is the thing of evil capitalism - it is definitely not Left-like goal at all.

The unemployed get less than them by a long stretch, yet these TUC people are demanding even more money out of the public purse, leaving the unemployed with the scraps.

>> The unemployed get less than them by a long stretch, yet these TUC people are demanding even more money out of the public purse, leaving the unemployed with the scraps.

People with jobs should get more than the unemployed you berk - otherwise where is the incentive to get out of bed and actually do a job. + they have to compete with the private sector, otherwise what is the point of working in the public sector.

The artical I just read on the edl makes me to beleave that you yourself are a racist if this
A muslim,asian boy thjat got beat up bad ,you people would have not syop reporting it
And would have had big front headlines saying rasict attack yet nothing was mensioned.Any
Way I do now beleave I what the edl stands for and it aint rascisum.

Homepage: not got one

Warning to Anti-Fascists and to the UAF 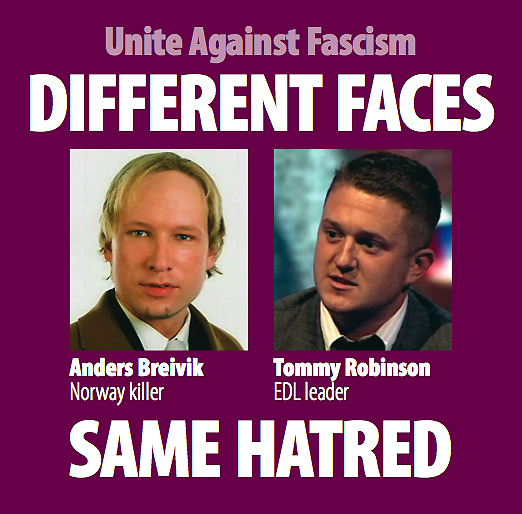 A post on the blog of EDL splinter group Casuals United says that "UAF have lost their ability to mobilise and have effectively given up the streets to us" ("us", in that context, meaning the Fascists). This is of course total rubiish, however following recent events in Liverpool, there's also been on-line chatter about the lack of an effective Anti-Fascist street response. Posts like the Casuals blog comment are however a deliberate TRAP, which Anti-Fascists should not walk into under any circumstances.

Despite the EDL being co-founded by convicted paedophile Richard Price, and despite BNP leader Nick Griffin and BNP founder John Tyndall being friends with paedo Kevin Alfred Strom etc, the far-right mobilise against paedos (but only when they're Asian) and against Republican marches etc in order to trick Anti-Fascists into counter-protesting, so they can post-up photos which they will misrepresent as evidence of Anti-Fascists "supporting" paedos and IRA child-killers etc.

This trick has been a long-term part of EDL and Casuals United strategy (particularly with the Casuals United protests in Blackpool) and it is critical that we do NOT provide them with such propaganda victories. The "left" (for want of a better word) are being deliberately needled by the far-right, and in some situations the most intelligent strategy is not to respond to this provocation, and, from time-to-time, choose to sit certain protests out.

In such situations it is more important for Anti-Fascists to focus on the battle for hearts and minds, and to counter-attack by actively circulating evidence of EDL and BNP involvement with paedos and Nazis. It's also important to remember that even though most of us have been forced to focus on much bigger enemies (the government, banks, multinationals, the cuts etc), still the opportunity this diversion-of-focus created for Fascism only resulted in what for the far-right was something of a damp squib in Hyde (equally sometimes the far-right are perfectly capable of messing-up a potential PR coup without any physical intervention from Anti-Fascists).

The counter-argument to all this would be that the Fascists use their demos as an opportunity to mobilise and attack ANYONE, and that Anti-Fascists have a duty, a right, and a need to defend our communities; so here are a few practical suggestions which address this dilemma...

1. If the far-right use anti-paedo or anti-IRA demos as an excuse for attacking "lefties" or Asians, Anti-Fascists can respond "in mufti" (so-to-speak). Leave banners at home, dress down, obscure your faces, don't chant, don't attract attention, but do shadow the Fascists (and take LOTS of photos) - if they are peaceful let the police handle it, if they steam-in then take appropriate action.

2. The Occupy demo in Liverpool was harassed by Fascists because the Fascists were in town to oppose a (separate) Republican march, so (for reasons of practical self-defence) keep tabs on far-right websites and Facebook chat and DON'T schedule any other left-wing demos on days when the far-right are threatening to mobilise (all the more so because in Liverpool the police used the Fascists the harass the Occupy demo).

3. The far-right have been defeated electorally, and (as a "Plan B") are now trying to re-focus their battle onto the "home territory" in which their core support feels most confident of potential victory - street violence. ANY fighting WILL however be misrepresented by Fascist propaganda as race-riots, so there's a balance to be struck between needing to deprive Fascists of PR victories by de-escalating confrontations, and the need for self-defence (and in that sense UAF have been more intelligent than militant Anti-Fascists give them credit for). In any confrontation the Fascists must be perceived by public opinion to be the villains, so sometimes it's better to risk letting the police deal with the EDL than it is to risk letting Anti-Fascists be portrayed as violent thugs (or worse). In this sense the villains it's most productive for Anti-Fascists to remind people about are serial-killer Anders Breivik (as Breivik's crimes are far worse, more recent, and more directly linked to the EDL than anything the EDL misinformation machine can try to smear us with) and (for something much closer to home) the likes of child-killer and BNP supporter Jon Venables etc. 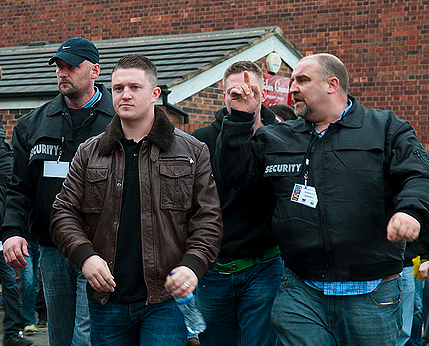 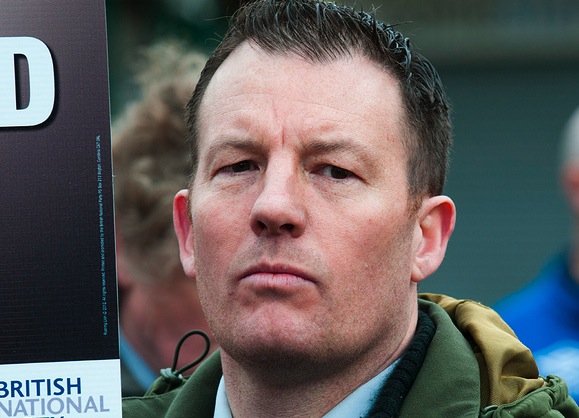 What Casuals United don't seem to have noticed was that Feb 25 was the date of UAF's national conference, in.... London. Possible explanation for why UAF weren't in Hyde?! 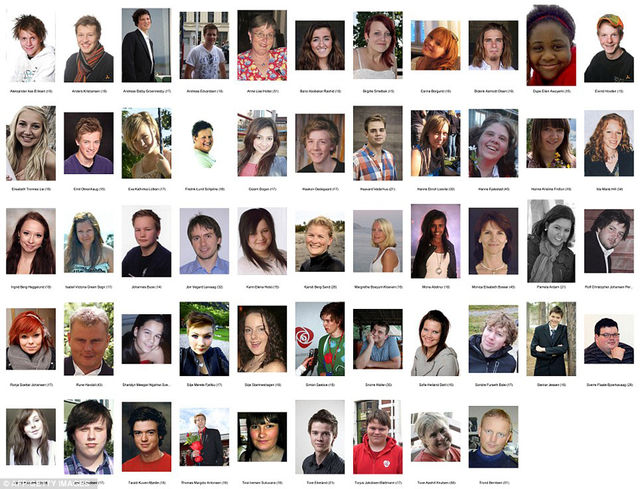 Liverpool - when the left DON'T need to counter-protest

A classic example of when the left DON'T need to counter-protest is the court-case in Liverpool, because

1. That counter-protest can be misrepresented as lefties "supporting" criminal suspects

2. As your man said, sometimes the right can be relied on to fuck-up without any help from us.

Nick Griffin turned up in Liverpool and was photographed putting his arms round 2 lads who were holding a Nazi flag. This is potentially THE MOST IMPORTANT PHOTO OF GRIFFIN EVER TAKEN, because up until now Griffin has never been photographed posing in front of a Swastika, never been seen giving a Nazi salute etc, but now we have clear visual evidence of Griffin's Nazism that can be used against him for the rest of his life !!!!!!!!!!!!!!!!!!

Griffin's also splashed over the media today for getting his knob out in front of a female colleague!

Protesting against Islamic extremism is not racism!

Protesting against Islamic extremism is not racism and patriotism is not nazism.