For the past fortnight, cleaners and other staff at GWH hospital in Swindon have been on strike against bullying and racism on the part of their bosses at Carillion Plc. On Feb 24th, Swindon Anarchists held a demo in solidarity. 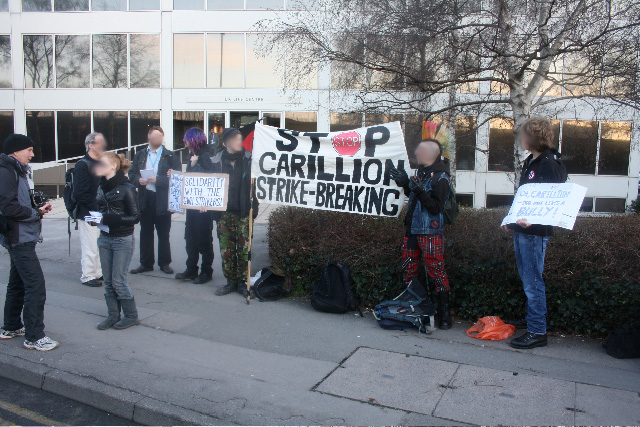 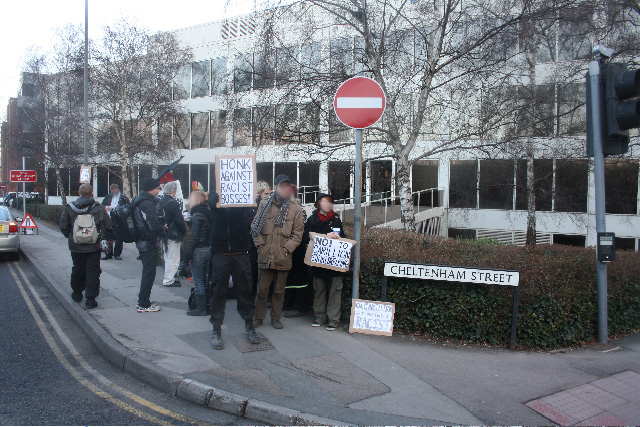 Getting support from drivers 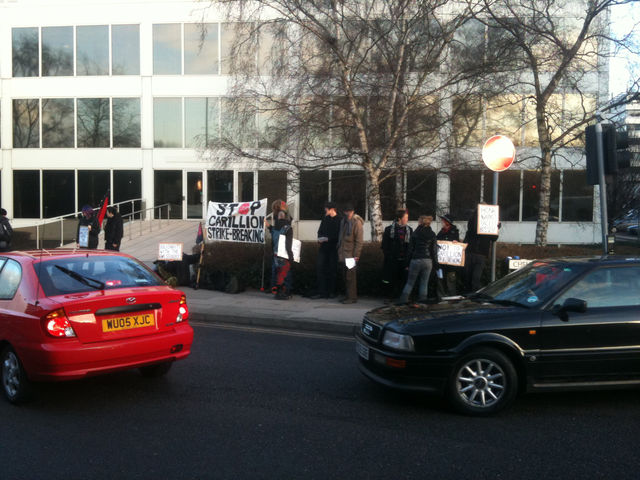 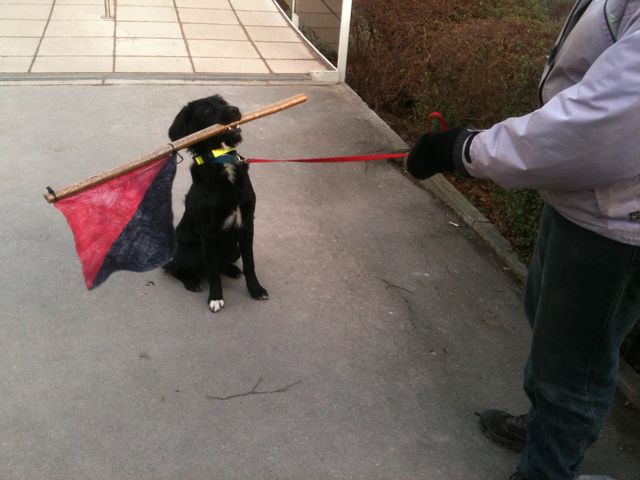 The workers, mostly Goan, have held 6 days of strike action over the last 2 weeks with more planned in the coming weeks. Since the campaign started, workers have picketed the hospital, held mass rallies, blockaded Carillion HQ and various other demos and pickets. The strike, which started solidly is only growing stronger by the day.
The dispute centres around the culture of racist and demeaning treatment that the Goan workers are routinley subjected to - particularly from one manager, who has since been forced to resign. Another key part of the dispute is the fact that the workers have been told that they are allowed NO holiday time between the 10th of December and the 7th of January, removing any chance of them visiting relatives and friends in Goa over the christmas period.
Carillion have done their best to ignore the issues at the heart of this dispute and have mounted a campaign of strike-breaking against the cleaning staff, putting pressure on Carillion employees in companies such as Zurich and Nationwide to scab at the hospital on strike days.
Swindon Anarchists, in what we expect to be the first of many escalating actions, decided to show solidarity with the hospital workers by holding a demo against Carillion strikebreaking at the Swindon Zurich offices on Friday 24th of Feb.
With support from comrades in Bath and Bristol, the demo attracted around 20 people, who leafleted cleaning staff, Zurich workers and passersby. Support for the demo, and the hospital workers, was overwhelming, with cars constantly honking in support and workers from Zurich expressing solidarity.
At the end of a sucessful demo, the cops turned up and started trying to take personal details, as well as insisting that if racism was an issue, then the dispute was not an industrial one, but needed to be reported to the Police! After one blushing cop apologised for his over-zealous colleague, they left empty handed.
If the demo showed one thing, it is that the people of Swindon are behind the striking workers and that, as their campaign escalates, they can count on the support and solidarity of large numbers of people in Swindon.
Swindon Anarchists will continue to stand in complete solidarity with the hospital workers, who are setting us all an important example of how to stand up to bullying bosses.

A list of buildings with Carillion contracts (especially those from which carillion are bullying workers into scabbing) will be released soon, so there are plenty of opportunities for solidarity actions in your town or city.