Today in Birmingham, around 50 people gathered to demonstrate against the government’s workfare schemes, which see people forced to work for up to 6 months in order to keep their benefits for hugely profitable companies. This was part of a national day of action, organised by Boycott Workfare, which saw over 40 towns and cities around the UK take to the high street to tell companies to leave the schemes. 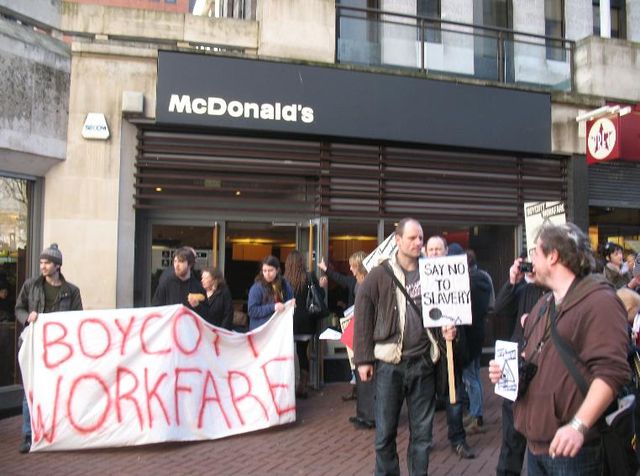 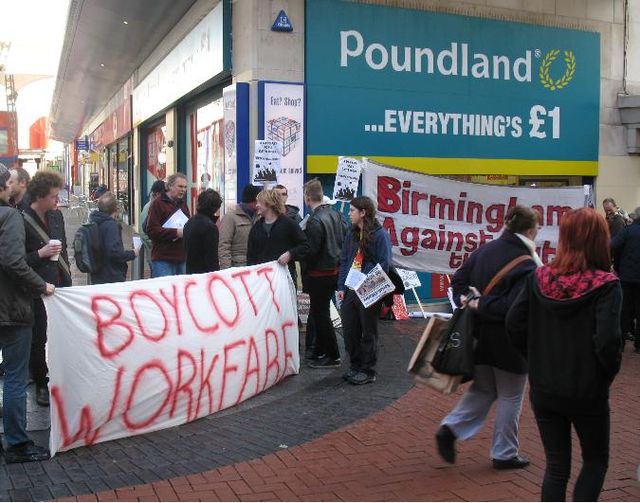 The protest started at Poundland, a local firm – based in Willenhall – who have been using free labour in their stores around the country. Last week, they announced that they would be withdrawing from the (mandatory) Work Programme, but would remain in the (technically voluntary) Work Experience Scheme. Click here for more information about the different schemes

After around 15 minutes, a discussion was had as to whether we should remain at Poundland, or move on to a worse offender, and the decision was taken to move to McDonalds on Cherry Street, with brief stop offs on the way to congratulate Sainsbury’s for pulling out entirely, and thank Superdrug for suspending their involvement pending an investigation, and also at Greggs who remain fully committed to workfare.

We remained outside McDonalds informing potential customers of McDonalds participation in the scheme, which saw many people turn around and go elsewhere as they do not want to give money to a business that takes advantage the free labour provided by workfare schemes, and agree that anyone who does a fair days work should get a fair days pay.
A brief occupation of McDonalds was held to finish the demonstration in style.

The workfare campaign continues on – we are winning on this issue, and can get workfare scrapped entirely. To read more about workfare, and why we support the Boycott Workfare Campaign click here.

Thursday 8th: Picket at Primark, New Street. 5:30pm-6:30pm. Joint demonstration on International Women’s Day, to raise awareness of both workfare and the abuse of sweatshop labour to produce their clothes – work which is largely done by women in South East Asia.

Please note the change in venue, as it was decided that the room at the council house would be too small, and with thanks to the good people at Unite who have agreed to let us use their meeting room. This venue is fully wheelchair accessible.

Birmingham Against The Cuts