Fukushima 1 year on: Hinkley Point to be surrounded and blockaded 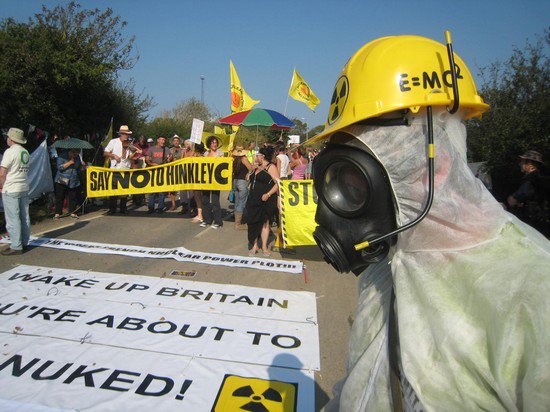 Leading environmentalists Jonathon Porritt and Caroline Lucas MP will join demonstrators at Hinkley Point nuclear power station in Somerset to mark the first anniversary of the Fukushima disaster - and to call for a halt to the development of Hinkley C. Kate Hudson, chair of CND will also be speaking at the event.

Community groups from all over the UK will be forming a symbolic chain around the EDF Energy-owned power station this Saturday March 10th. The chain will represent their battle to stop the expansion of Hinkley Point and to halt the government’s push for seven other new nuclear power stations around the UK. The event will be followed by a 24-hour blockade of Hinkley Point’s main entrance.

Allied protests will also be taking place against new nuclear power stations at Wylfa in North Wales, Heysham in Lancashire and a mountain-top demonstration in Cumbria. Rallies calling for an end to nuclear power are also expected in 15 countries including: Japan, Germany, Spain, France, the US, Argentina, Australia and Switzerland.

At 12noon demonstrators will gather outside the main entrance to Hinkley Point nuclear power station. Caroline Lucas and Kate Hudson will give speeches explaining why nuclear power must be consigned to the energy dustbin.

From 1pm to 3pm protesters will spread out around the site of the existing nuclear power station to form a human chain. Similar chains are being formed in cities around the world.

At 2pm, demonstrators will make a one-minute ‘sound wave’ to show the government they will not be silenced.

Between 3.30pm and 4.30pm Jonathon Porritt will give a speech about the alternatives to nuclear power. Fukushima refugees, Akiko and Makoto Ishiyama will describe what it is like to live through the ongoing nightmare that thousands of Japanese people are enduring.

From 6pm demonstrators will blockade the main entrance to Hinkley Point nuclear power station. The blockade will continue until 2pm on Sunday.

She added that French-owned EDF Energy’s track record was worrying. “In France two of EDF’s executives were recently jailed for spying on Greenpeace. Over here we have already seen abuses of British regulations. The company is currently trashing protected countryside at Hinkley Point even though it does not have planning permission to construct the new power station. Clearly, this is the kind of company that puts profit before people and the environment.”

Jonathon Porritt has made it clear that ‘new nuclear’ is not necessary to combat climate change. “We can achieve everything we need in terms of secure, low-carbon energy primarily from energy efficiency, renewables and modern technologies like Combined Heat and Power. I believe that we can still persuade UK citizens that ‘new nuclear’ is the wrong thing for us to be doing.’

A Japanese couple who fled their home after the Fukushima disaster will be speaking at the Hinkley protest. Akiko and Makoto Ishiyama will explain what it is like to live through the ongoing nightmare that thousands of Japanese people are enduring.

Zoe Smith, spokesperson for South West Against Nuclear, said it is important for communities in Wales and the South West to understand how vulnerable they are to a Fukushima-style accident. “Bristol, Exeter, Taunton, Yeovil, Cardiff and Swansea are all within the 50 mile evacuation zone recommended by the US and France. The threat from a leakage of radiation or a full-blown disaster are very real,” she added.

EU-funded research shows that the health risks posed by high-level nuclear waste from the new EPR reactors is up to seven times greater than waste from existing reactors. For this reason, it will have to be stored on site for over 150 years before it can be moved. Zoe added: “This is a huge risk to employees at the proposed plants and to the communities living around them.”

Anti-nuclear campaigners say local authorities should focus on developing green jobs in the region. ‘A green economy could produce many more jobs than Hinkley C The construction of Hinkley C will bring massive disruption to the community and, in the longer term, will put many people at risk from radiation contamination. We want a future, not a disaster.”

A raft of hidden government subsidies has also been brought in through the back door to support the government’s ‘nuclear renaissance’. Andreas Speck from the Stop New Nuclear alliance said: “In the long-term this will have a big impact on public funds because history has shown us that nuclear is not viable without state support.”

A new independent report entitled, A Corruption of governance?, has revealed that data presented to ministers was skewed in favour of the nuclear option and that correct figures show that nuclear power is unnecessary to keep the lights on. The report concludes that the errors were, ‘Either a monumental series of mistakes or the ‘nuclear lobby’ has got control of the Whitehall machine’.

Zoe Smith,said a nuclear renaissance would take the UK in the wrong direction. “Our protest at Hinkley is a wake-up call. We have to take a new approach to energy provision. Nuclear power only reinforces the notion that we can carry on consuming energy in ever-increasing amounts.”

She continued: “The reality is that we have to start reducing our energy consumption and making modern life more energy-efficient. We then need to spent the £60bn earmarked for ‘new nuclear’ on truly renewables forms of energy and research into more efficient forms of energy storage. Nuclear will simply lock us into the ‘business as usual scenario’ that got us into this mess in the first place.”

Nancy Birch, spokesperson for Boycott EDF added that the German government recently introduced a new energy policy that sets out a blueprint for a nuclear-free future. “Germany is paving the way by creating an energy infrastructure that is not only nuclear-free but safe and affordable. The burning question is, if Germany can do it, why can’t we?”

Notes to the editor:

The demonstration at Hinkley Point is organised by the Stop New Nuclear alliance. The alliance includes the Stop Hinkley, CND and Shut Down Sizewell campaign groups.

The human chain or ‘surround’ will take place from 1pm to 3.30pm on Saturday 10th March. During this event , Hinkley Point’s perimeter fence will be decorated with anti-nuclear slogans and Japanese peace cranes.

At an allotted time, there will be a one minute ‘noise wave’. Whistle, sirens and musical instruments will be sounded as a demonstration that anti-nuclear activists will not be silenced.

Mr and Mrs Ishiyama will be telling demonstrators at Hinkley Point how they left their home in Fukushima City six months after the nuclear disaster because of concerns over the impact of radiation contamination on them and their young child. Mr Ishiyama is currently working as a graphic designer, and his wife is dental assistant. They now live in Obihiro, Hokkaido.

The mountain-top demonstration in Cumbria is being organized by Radiation Free Lakeland to protest against the government’s bid to build an underground repository for high level nuclear waste in the Lake District that will be deeper that Skafell is high and bigger than the City of Carlisle.

A corruption of governance? was launched in January by Unlock Democracy and The Association for the Conservation of Energy. It is supported by MPs Caroline Lucas and Tessa Munt.

The EPR nuclear reactor: a dangerous waste of time and money is a new report by Greenpeace International that summarises the huge cost and safety concerns surrounding the new European Pressurised Water Reactors.

A second report from Greenpeace, Lessons from Fukushima, highlights the fact that a lethal mix of human error and corporate inertia makes long-term nuclear safety an impossibility.

The Future’s Green: Jobs and the UK low-carbon transition, a report by the Institute for Public Policy Research outlines to key changes needed to create growth in green employment.

Medical research has shown that missiles tipped with the nuclear industry ‘s waste product, depleted uranium, have led to widespread radiation contamination in war zones around the world and an alarming increase in cancers and deformities in children.