British peace activist and nobel prize nominee Angie Zelter is amongst those who have been arrested in ongoing protests against the building of a new naval base on Jeju Island in South Korea. The military base is due to be built on the island which was named an “Island of World Peace” by the South Korean government in 2005. Local villagers and activists have raised concerns over the environmental destruction of the island, which has several UNESCO World Heritage sites, and its potential to escalate military tensions in the region. 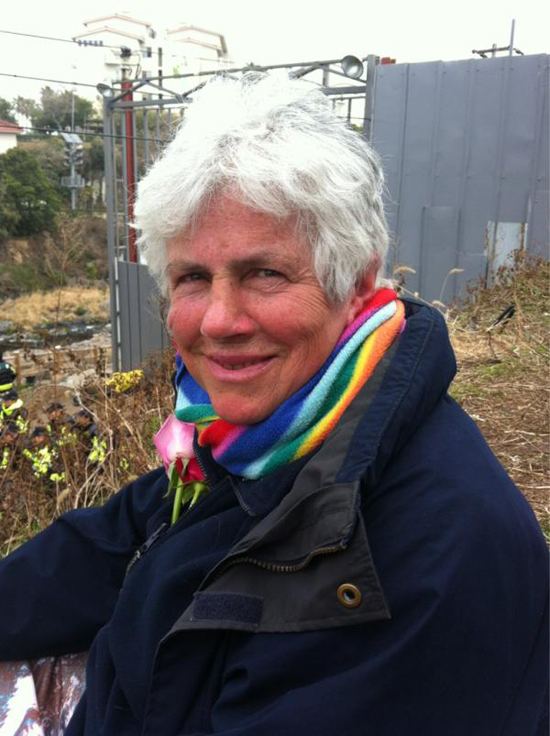 Explosions have already begun on the Gureombi rocks on the island to prepare for the construction and hundreds of protestors have been involved in non-violent blockades of the site. There are reports that local police have used aggressive tactics against non-violent protesters.

Local villagers have been engaged in a 5 year long struggle to prevent the construction which threatens the sacred coastline of the village and the fragile corals in the bay. 94% of Jeju islanders voted against its construction and have used every democratic means available to them to oppose it. There has been support for their stance from the local governor and police but it is feared that the Korean government is under huge pressure from the US to complete the project. A popular slogan used by those protesting against the construction is “Touch not one stone, not one flower”

The base will contribute to the growing US military presence in the region, with China as the focus. It is set to become a port for U.S. Navy Aircraft Carriers and Aegis destroyers fitted with SM-3 missile interceptors as part of a growing global US Missile Defense system. The growth in the Missile Defense system risks heightening international tensions as it is seen to enable the US to launch a first nuclear strike without fear of retaliation and could precipitate a new global arms race.

Speaking before her arrest Angie said:

“With all my heart I believe that Gangjeong villagers’ peaceful lives and the pristine nature of Jeju deserve to be protected from this aggressive act by the Korean Navy and its US backers. I am happy to do my little bit to help .Building the naval base does not advance the security of Jeju or South Korea - it just adds to military tension on and around the Korean peninsula. This affects us all.”

Professor Dave Webb, Chair of Campaign for Nuclear Disarmament, who has just returned from the island said

“Jeju Island has been designated as a World Heritage site by UNESCO - as such it is the concern of all of us.We cannot allow the military to destroy such a unique resource. Jeju is a beautiful Island, once the scene of a massacre of some 30,000 islanders by their own government. It was named “Peace Island” to commemorate its tragic past. Now it looks as if the people are fighting once more for their village, their culture and their livelihoods."

11a.m. Sunday, 11th and I am back in Gangjeong - it really feels like home. I had a quick change of clothes and then I was grabbed by a reporter for an interview and then told the SOS team (they are the ones that organise the boat and swimming actions of which I am a part) wants to meet me at 4p.m. But there is a press conference before that at 2 p.m. And loads of people to hug ..... so it is a good idea I had a nice rest in the police station! As there is no work being done on the site today there are no blockades - thank goodness.

The morning of Friday 9th started early as usual with the blockades being set up around 5 a.m. I showed my face, danced and sang and said a few words as usual and then set off for the ’secret’ action.

Gathering together there was a sudden run for about 10 minutes (I could hardly keep up) to a portion of the fence where a banner was quickly put on the fence showing a gate to be opened. It was drawn aside and some of us broke through the fence with crow-bars and crawled through. Rather rough brutes working for Daelim construction company started kicking at us and trying to stop us get in but most of us managed to enter the 2 holes made. I was kicked in the breast but it was not bad and I soon got away and ran into the site.

We were all over the place - the construction workers did not know which way to run. The police were soon called in and we were slowly arrested. I was able to take lots of pictures of inside the site before I was caught and given 3 warnings - called ’Miranda’ warnings for some reason I have not yet fathomed.

I was told I was arrested for violently taking down the fence and illegally trespassing. As usual I politely refused to walk away and it took a long time for around 10 police-women to arrive and move me - I do not think they have much experience of carrying dead weights. But they were very sweet and managed eventually. It only took them about an hour to find us all and I was put in a car with one of the priests who was with me and the others put in a bus. We then spent several hours waiting while the riot police tried to force their way out of the main gate so our vehicles could get out. The villagers were blocking it.

We were taken to Seogwipo police station and interviewed. There was a very nice translator for me - a tour guide on the island - but he did not have much to do as I was refusing to answer all the questions. The police women soon found out all about me on the internet and got my passport details through the airport and asked questions about how, where, when with whom etc but I just said that for today I was ’Save Gureombi for Peace not War’, I was a global citizen living in Ganjeong and that if they wanted to get hold of me they should ask the Mayor as I lived in different houses at different times. The police station has no facilities for keeping prisoners and so we were then sent off in a police bus altogether to Jeju City. It was a route I did not know and with the tour guide beside me it was an interesting ride! (I hope I am converting you all to direct action!)

Jeju City police station was a real experience. Everyone quite kind and gentle. Food reasonable. Large airy cells arranged in a semi-circle around the receptions desk with the front wall of each cell being glass so you could see everything going on. Our watches were allowed in with us too. Over the 2 days I had 2 visits - one with Sung-Hee who was able to inform people of my arrest and condition and the other with the Bishop of Jeju who wanted to personally thank me for taking part in the action. I said it was my honour. The rest of the time was spent resting and learning a little hangul and a few more words of Korean.

We were all very pleased to have taken part in this action. I think around 29 of us managed to get in and breaking the fence is considered quite a serious offence here so it was a breakthrough in many ways. The catholic community backed up by a few presbyterians were the main people involved and I am very impressed with their dedication and resolve. The Bishop told me that many bishops on the mainland were also supportive and that the naval Base would be a major discussion point in their Congress next week.

This morning around 7a.m. we were slowly released and then put in a police bus that kindly brought us back to Gangjeong. We will be informed of our court cases by mail. It will be quite a big case as it involves catholic priests and Jesuits from the ’Jesuit Resdcue Service’ that I have been learning about. Oh there is so much to tell you all about but I have to go to another press interview and then the formal press conference so I only have a few more minutes left.

Most importantly, the actions over the last few days are having an increasing political impact and yesterday, Saturday, the opposition parties made a common pledge for the election that they would stop the construction going ahead and hold an investigation. It is also expected that the process the Governor of Jeju started a few days ago will result in his demanding the Navy to stop and then the Navy will counter-demand and I will not go into all the gory details but it amounts to a continuing conflict between Jeju and mainland Korea that will probably result in court cases arguing about who really had administrative power over this project. Meanwhile the actions will continue.

I have just heard that 2 veteran activists form the USA will be joining us soon, which is good as there is only another week or so before I go. I just wish I could stay for longer but we need to keep our campaigning going in the UK too ..... and it is all connected. Love and hugs to you all and please keep the protest letters going to the Korean Embassy - it all helps.

Other TP articles about the actions of the last few days on Jeju Island can be found here:

Bruce Gagnon serves as Secretary/Coordinator of the Global Network. He has been working on space issues for the past 25 years and helped create the GN in 1992. His book, called "Come Together Right Now: Organizing Stories from a Fading Empire", was republished in 2008. For 15 years he coordinated the Florida Coalition for Peace & Justice. He was trained as an organizer by the United Farmworkers Union and is also a member of Veterans for Peace.

We talk to Bruce about saving Jeju Island of the coast of South Korea , Gangjeong residents have vehemently opposed by protesting daily and risking their lives and personal freedom to block a US military base being built on the small island. Since plans for the naval base were announced five years ago, 95% of Jeju residents have voted against the base and used every possible democratic means to block its construction. Yet their protests have fallen on deaf ears.

The South Korean government is willing to sacrifice the safety of the island residents in order to build this U.S. missile defense outpost as part of a provocative strategy to surround China. Jeju residents refute the claim that this naval base will improve the Korean peoples security; they know it will further destabilize the Asia-Pacific region and make the island a prime target for military retaliation. This base represents a dire threat to global peace and security and it is up to us to reclaim our democracies and put a stop to this insane paradigm of global capital expansion and corporate rule.