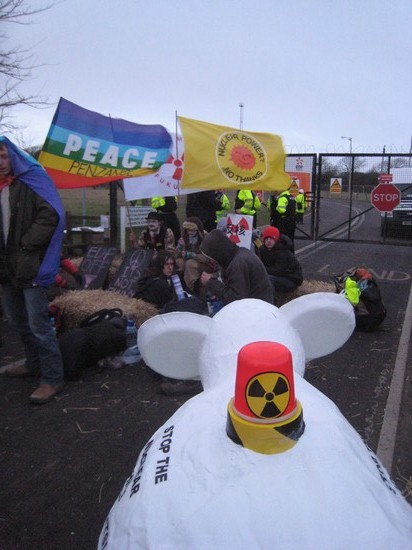 Over 1,000 people from all over the UK converged at the main gates of EDF Energy’s Somerset power station to mark the first anniversary of the Fukushima disaster and to call for an end to the government’s ‘nuclear renaissance.’

Speaking from the demonstration, Martyn Rowe, a verteran anti-nuclear campaigner said he had not seen such a large turnout since the mass protest against the construction of the Torness nuclear power station in 1979.

He added, “It is clear that the tide is turning against the government’s push for a ‘nuclear renaissance’. The British public is waking up to the fact that ‘new nuclear’ is dangerous, expensive and completely unnecessary.”

Mr Lowe words were underlined the leading environmentalist Jonathon Porritt. Speaking at the rally he said he found it ‘unbelievable’ that nuclear energy was being put forward as a solution to climate change. And he called on the government reconsider its energy strategy.

He added: “It is clear we can do everything we need to do without nuclear power. The whole thing is being fixed to suit the nuclear industry. In Germany, they are working towards a nuclear-free future that affordable and realistic. Why is it we don’t think Germany is a really good model to follow?”

Porritt also rounded on the Liberal Democrats as they gathered for their annual conference. Referring to the LibDem u-turn on their anti-nuclear policy, he said: “It seems there is no betrayal to which they will not stoop to keep in power.”

Green Party MP, Caroline Lucas, echoed Porritt’s call for an end to nuclear power in the UK. She added, “The £60 billion the government wants invested in new nuclear is £60billion that should be channelled into developing renewable energy sources and making them fit for purpose in the 21st century.”

Kate Hudson, chair of CND also called for and end to the UK’s ‘insane and criminal addiction to both nuclear power and nuclear weapons’.

The gathering at Hinkley, which included supporters from France and Taiwan, was more than double the size of the blockade of Hinkley Point held last October. Nancy Birch, spokesperson for Kick Nuclear said, “Today we have captured the public’s minds and hearts. We have heard first hand from a young Japanese couple of the desperate situation that the people of Japan are facing in the wake of the Fukushima disaster.

The question we need to ask is, do we really want to put our children under threat from a similar catastrophe in the UK when there are viable alternatives to nuclear power at our disposal?”