On the first anniversary of the Fukushima disaster, anti-nuclear campaigners claimed two records in two days. The mass protest at Hinkley Point nuclear power station on Saturday attracted more than 1,000 people from all over the UK – the largest protests against a the construction of a nuclear power station in four decades. 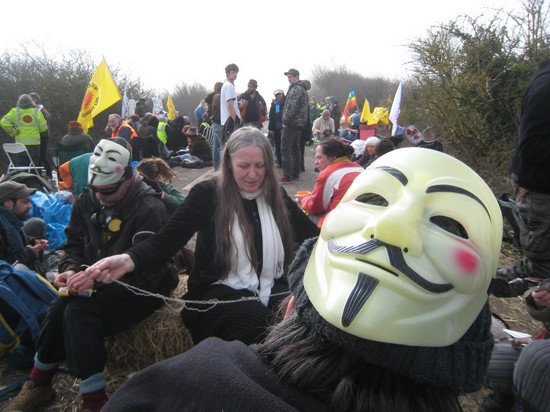 And today (Sunday) the Stop New Nuclear alliance successfully concluded the first ever 24-hour blockade of a UK nuclear power station. Nancy Birch, spokesperson for the alliance said: “This is a major victory for the anti-nuclear movement and a sign that the tide is turning against the government’s nuclear renaissance.”

On Saturday, leading environmentalists Jonathon Porritt and Caroline Lucas MP joined over 1000 demonstrators at Hinkley Point to mark the first anniversary of Fukushima and to call for a halt to the government’s bid to build eight new nuclear power stations. Protesters came from as far away as Ireland, France and Taiwan.

A mini tent city then emerged as over 100 people remained outside the main gate at Hinkley overnight - camping on the tarmac in makeshift tents. The blockade formally ended at 2pm today when Japanese bhuddist monks performed a prayer for the victims of the Tsunami that precipitated the Fukushima disaster and to urge the UK government to take a more enlightened view on energy provision.

Nancy Birch added: “It is clear that the public is waking up to the fact that we don’t need nuclear power to keep the lights on. Germany is leading the way in creating a blueprint for a sustainable energy future that is nuclear-free, affordable and doesn’t leave its citizens with the shadow of another Fukushima hanging over their heads. The burning question is, if Germany can do it, why can’t we?”

Martyn Lowe, a verteran anti-nuclear campaigner said he had not seen such a large turnout since the mass protest against the construction of the Torness nuclear power station in 1979.

He added, “The simple fact it that that ‘new nuclear’ is dangerous, expensive and completely unnecessary.”

Notes:
Jonathon Porritt is launching a new book which provides a warts and all overview of nuclear giant EDF Energy’s influence on Whitehall and Westminster.