Residents and students close their accounts with high-street banks in protest of the financial crisis caused by the banks. 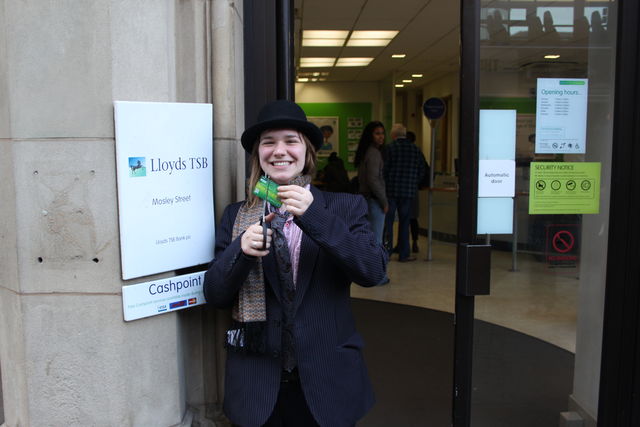 Campaigners and local residents of Manchester went to Market Street on Wednesday 14th of March at 1pm to move their money from mainstream banks to more ethical banking systems.

Following the national Move Your Money campaign, launched in London, Manchester campaigners have run workshops to promote ethical banking with the aim of raising awareness and providing alternatives. Many customers are angry at their current banks due to the recent recession starting in 2008, the direct result of a financial crisis caused by the gambling of an irresponsible cartel of banks. Customers who no longer want to support banks that caused the crisis and have no genuine ethical investment policies can act against them and send a signal to the market by moving money to more ethical alternatives of banking such as credit unions, ethical banks and building societies.

“I support Move Your Money UK’s campaign to tackle excessive remuneration and short-termism in the British banking system using consumer power to ensure it serves the needs of our society. We need more mutual, local and ethical financial institutions to challenge the dominance of the big four banks.”

Jamie Audsley, 28, a teacher and community worker who lives in West Norwood closed his current account with RBS and cut up his bank card:

“I'm so frustrated that RBS, a bank owned by the taxpayer, is still not listening to us its shareholders or our elected representatives. That's why I've joined this campaign today to make them listen to us as customers.”