A Week of Action Against Ryanair's Great Plane Robbery

You might remember an incident from back in January, when a man named John Foley brought the Everton V Manchester City game to a standstill by handcuffing himself to a goalpost. The reasons for his protest were lost amidst the sensationalist media coverage of this event, but he did it to highlight the way low budget airline Ryanair treat would-be employees, like his own daughter Sarah. 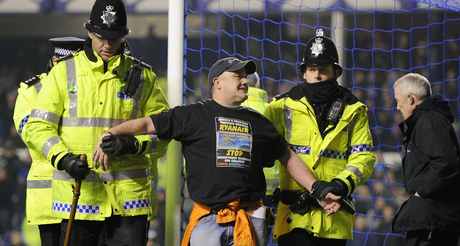 John Foley is dedicated to spreading the word about Ryanair's exploitation

Under Ryanair's recruitment policy - which has been labelled 'recruitment for termination' - potential cabin crew pay the multi-billion pound company a fee of three thousand euros to register on a training course. All those sacked before the course finishes lose all their money, and of course do not get a job with the company. This scam is a great earner for Ryanair, because they get to pick those they consider the cream of the crop, whilst trousering money of those they deem unsuitable for the position. So long as enough people are willing to pay the huge registration fee, there is an obvious incentive for the company to recruit many more for the training course than they plan to take on at a later date.

In the case of Sarah Foley, a supervisor tried to persuade her to resign the day before she was sacked. If she had done this, she would have been charged an additional two hundred euros. In the event, she was refused a flight home because - as a non-employee - she was ineligible.

As if this weren't bad enough, those who survive the initial training course are put on a twelve month probation, and are paid at a much lower rate than others performing the same work, with the company making an extra £20 million per year from their labour. Again, this acts as an incentive for the airline to operate an employment revolving door.

Tomorrow is the last day of the Week of Action Against Ryanair, initiated by Liverpool Solidarity Federation. Pickets have been taking place around the country, including at the Cheltenham Festival, around the Ryanair Chase. However, if you are not attending these pickets, you can make your point to Ryanair by phoning +353 1 812 1212, faxing +353 1 812 1676, or using their web-based complaints form. But perhaps the most valuable thing you can do is spread the word about Ryanair's hyper-exploitative labour practices.

More information about the campaign can be found at the Ryanair Don't Care blog.