Prison Was Created For The Poor pdf

Leeds ABC have released our pamphlet PRISON WAS CREATED FOR THE POOR as a PDF file (downloadable from the Leeds ABC website at www.leedsabc.org). 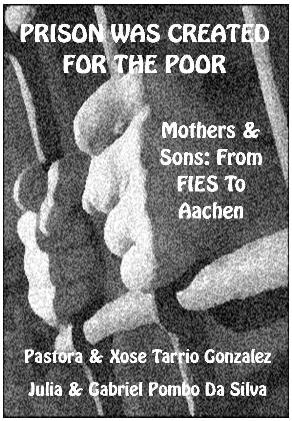 The 36 page pamphlet was originally released by Leeds ABC in 2007 and focuses on two tireless militants of the Spanish prison struggle, Xose Tarrio Gonzalez and Gabriel Pombo Da Silva, who fought against the brutal F.I.E.S. isolation units. Xose was killed by a life behind bars, and Gabriel now rots in a German prison. As well as biographical pieces on Gabriel and Xose and a short excerpt from Xose’s book ‘Huye! Hombre, Huye!’, the pamphlet contains a first-hand account of the Aachen trial (see below) and an introduction by Mark Barnsley. The main part of PRISON WAS CREATED FOR THE POOR though, is the text of an interview with Xose and Gabriel’s mothers, Pastora and Julia. The interview took place during the trial of Julia’s son, Gabriel, and her daughter Begoña, and of Gent ABC activist Bart De Geeter and Gabriel’s fellow escapee, José Fernandez Delgado, in Aachen, Germany, in 2005. Through this medium, they tell a powerful and emotional story, which not only takes us inside the world of Spanish high security prisons, but reflects on jails throughout the world.

Like far too many comrades, Gabriel and Jose remain in the dungeons of The Enemy, and as with so many long-term prisoners, attention has shifted away from them to the point where little recent material can be found about them on the internet. In view of this, Leeds ABC have agreed to a request to release our pamphlet as a PDF file. While Leeds ABC remain committed to publishing material in ‘hard copy’, which we believe is more universally accessible, and also raises funds for the direct support of prisoners (and not for the arrogant North American parasites who constantly rip-off our publications), as with some of our other pamphlets, we have decided to publish PRISON WAS CREATED FOR THE POOR as a PDF in the hope that its wider circulation will increase solidarity with Gabriel and Jose.

We hope that you will enjoy reading PRISON WAS CREATED FOR THE POOR and that it inspires you to revolutionary action or at least to support those comrades who find themselves behind bars. Gabriel and Jose’s prison addresses are as follows:

Advice on writing to prisoners, as well as the details of other imprisoned comrades in need of support, can be found on the Leeds ABC website.

If you would prefer to read PRISON WAS CREATED FOR THE POOR in hard-copy, it can be obtained directly from Leeds ABC (details on the Leeds ABC website) or from radical booksellers such as AK Press. As with all Leeds ABC publications, all profits made from sales are used for the direct support of class struggle and Anarchist prisoners.