Declaration of revolutionary prisoners in support of comrade Tortuga 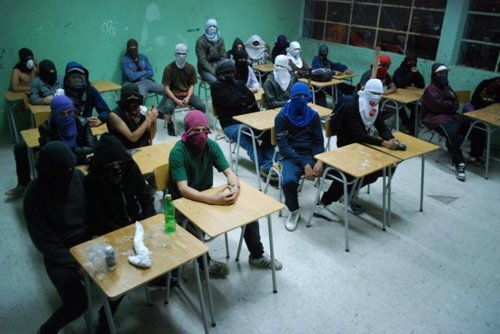 This text was written before Luciano entered the health area of the Santiago 1 prison. Its delay in publication is due to the involvement of the different comrades imprisoned under the $hilean state, held in different prisons, so the dissemination and editing of this was made very difficult.

Joint declaration of subversive and revolutionary prisoners in support of the comrade Luciano Pitronello.

To the broad and widespread revolutionary/subversive spectrum:

We combatants of freedom have from within different centers of extermination united our words in order to make from them a strong gesture that passes through the isolation with which Power intends to silence us, so that our united gestures arrive at those comrades who do not take a step back before the enemy. This initiative aims to break the logics with which democracy sustains itself, those who with their moral citizenship seek to isolate the comrades in order to relegate them to forgottenness, but they do not frighten us and we raise our voice to send our strength and care to the comrade Luciano Pitronello, who after the events of the early hours of June 1st has been seriously injured.

We are not interested in the dilemma of guilt or innocence, our language is not that of Power, since we do not recognize anyone who comes to judge our decisions much less our own selves. Our responsibility is not judicial, we assume a political responsibility before our comrades of struggle, which has nothing to do with their laws.

It is because of centuries of oppression and exploitation that across the length of history various expressions of resistance and offensive have raised themselves against the oppressors. In $hile since the beginning of the 20th century we have been developing experiences of libertarian and autonomous struggle, which continue until today.

Today under a democratic regime, heir to the dictatorship of the tyrant Pinochet, the revolutionary/subversive struggle continues and takes new forms. For years the multiform expressions such as days of dissemination, meetings, shows, publications, etc were making themselves every time more frequent, as well as other forms of struggle, which disrupted the false peace of the oppressors. Anonymous hands began to attack material symbols of Power continually, with explosives or homemade incendiary devices. While these attacks began to have much notoriety since 2004, they are no more than the continuation of the offensive and resistance that militants of political-military organizations (MIR-FPMR-MJL) decided to continue after the dictatorship-democracy transition, but the difference is that now the sedition organizes itself in a horizontal form, an affinity-based and informal form.

Autonomous Mapuche, squatters, anarchists, former political prisoners and now insurgent student youth are the internal enemy of Power, which tries daily to annihilate them. Through the mass disinformation media the oppressors have marked the path for repression, likewise they have also sadistically made fun of the painful accident that Luciano faced. All this under a supposed anti-terrorist campaign, it is here where we are not deterred. For Power every person in individual or collective form who intends to subvert the imposed order is cataloged as terrorist, and not for the violence with which people act, but rather for their conviction and decision to fight. For us the only terrorist is Power, the State and Capital, since terrorism seeks to cause indiscriminate fear in society, and it is only they who have the capacity and resources to impose themselves over all the oppressed.

Power already feasted on the unfortunate loss of Mauricio Morales, a valiant anarchist comrade, not only celebrating his accident but also criminalizing all his relations of friendship and comradeship, he is added to a long list of combatants who have fallen in the struggle against oppression. And it is for this struggle also that now there is a comrade wounded and held captive in similar circumstances, and so support becomes indispensable.

We recognize our differences as individuals, but these are not limitations for our recognition of each other as comrades in struggle, even without some of us knowing each other, the love of freedom unites us and it is the differences between us that strengthen us. It is for this reason that we make the call to solidarity with the comrade Luciano/Tortuga. To not fall into the fear that Power wants to impose in order to isolate the comrade. The fact that an anarchist comrade has been wounded, is a prisoner and faces a judicial process is sufficient reason to support him and not leave him alone. We do not remain impassive while they make a tragedy into a spectacle, showing itself as clear vengeance against one who they see as the visible face after years of anti-authoritarian resistance and offensive.

Nor do we forget the support that old political prisoners received in past years, those who were sentenced for assassinations, expropriations or explosive attacks, which did not impede those consistent persons from supporting the mobilizations that allowed the comrades to return to the street, as a valuable example of struggle.

May these words of love and freedom pass through walls and bars in order to reach Luciano and his close ones in this difficult time. Comrade our thoughts are with you, we envy your strength for you stay strong against the enemy, because in the social war no one is alone, we make solidarity our greatest weapon.

With all the comrades fallen in combat in memory, for them our greatest homage is to continue fighting. Combatant youth, permanent insurrection.

May the historical memory bury those who condemn the path of the offensive against Power!!

While there is misery there will be rebellion!

Luciano – Tortuga to the street, now!

PS: The comrade was charged on November 22nd for a “placement of IED” and for “falsification of license plate,” also he is investigated for other attacks. In this hearing he was ordered to preventive prison while the investigation continues for 70 days.

Luciano is in the High Security Area of the prison Santiago One, he needs a special and constant treatment which is subject to the disposition, will and energy of the jailers, being gendarmería, the institution is responsible for the health of the comrade not deteriorating.