Don't Mourn The NHS - Organise To Save It!

Well, it's practically a done deal. The parliamentary parlour games are nearly over, and the government has almost had its wicked way with us all, dealing a horrible blow to the NHS. The Tories will be jubilant, because they've gone a long way to realising their no doubt childhood dreams of breaking up what Americans call 'socialised medicine'. Labour will secretly be pleased that by delaying the inevitable for one day they've been able to strike an absurd pose as 'the party of the NHS' six weeks before council elections, even though Andy Burnham himself accelerated its privatisation when he was in the ministerial position he is now shadowing. And the Lib Dems have earned their coalition corn by continuing their filthy role as apologists for the largest assault on the UK working class in living memory. 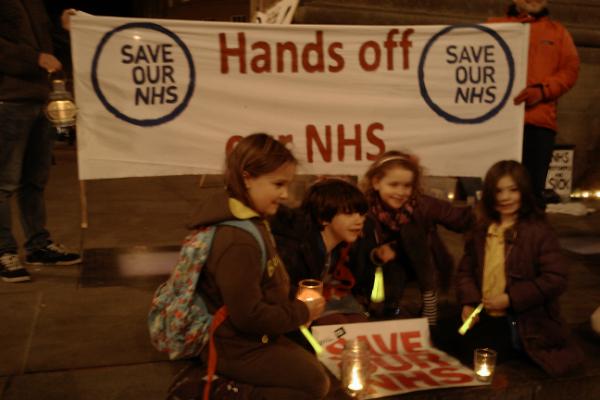 Kids at a Newcastle vigil, but vigils achieve nothing in practical term

So many of us will be feeling something like despair tonight, and that's certainly the mood encouraged by the morbid and ghoulish Labour-linked NHS vigils up and down the country. After all, the way things are, it's difficult to look for light amongst all the darkness, and I don't mean fucking candle light. Right now, every single one of us are on the back foot in our daily lives. Waged workers are getting squeezed much harder for little to no pay rise reward. Price hikes are hitting us where it hurts most - the wallet or purse. The cuts are leaving society ever more impoverished. And the ruling class privatisation agenda is steamrolling forward at a dizzying pace, with all the holies becoming profaned - post office, NHS, and now even the roads. It can feel overwhelming, and it is probably meant to.

But much though the various union and Labour-linked organisers of the deathwatch vigils might want us to believe it, we are not powerless against a handful of parliamentarians. They only have the power we give them. And by that, I don't mean we should simply vote in another set of politicians - they are all hopelessly compromised, or become so as soon as they enter the corridors of power. No, I mean we have the power to stop the NHS bill coming into force, because we are the ones who ultimately put all laws into force. As Malcolm X put it, "Power never takes a back step - only in the face of more power." Sooner rather than later, we can and must realise our true common strength, and become that second, far greater power.

The UK government's own actions - and indeed the actions of every government in Europe and beyond - are preparing the ground for immense class battles. Paradoxically, with each attack they launch, our potential united power grows stronger, because they open up another front in the war. Fewer and ever fewer working class people are able to continue living their lives as if nothing had happened, so more and ever more are drawn into resistance and battle. I've cited the grassroots Sparks electricians as an example for our class more than once - but their independence and militancy does indeed illuminate a path for the rest of us the rest of us to follow.

And in Thessaloniki, Greece, there is a hospital where the doctors, nurses and other staff took over the running their workplace. I blogged about it last month (

http://infantile-disorder.blogspot.co.uk/2012/02/greek-hospital-occupied-by-workers.html), and they kept it up for several weeks before being forced to suspend the occupation (

http://news.infoshop.org/article.php?story=20120310200124779). The same could well happen in this country before too long. If and when it does, we must support those everyday miracle workers in any way we can, and they must help us in our own workplace and neighbourhood struggles. That is the true meaning of solidarity, and it is only by solidarity that can we rescue our lives from this cycle of defeat and despondancy.