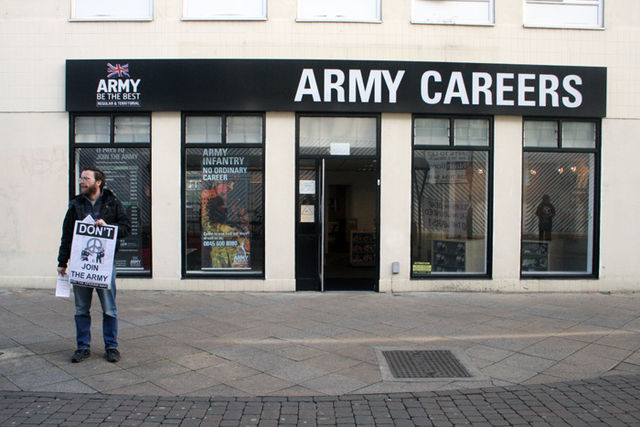 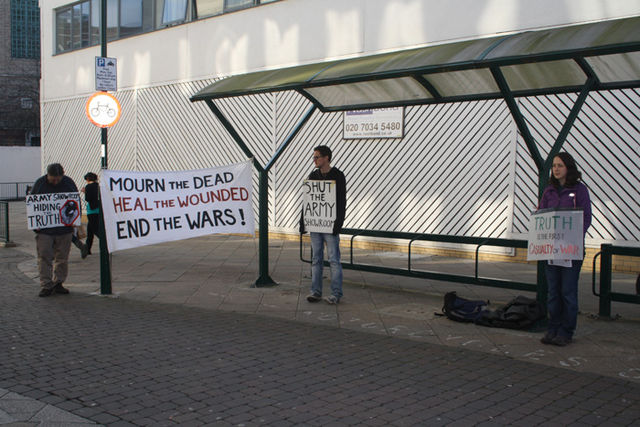 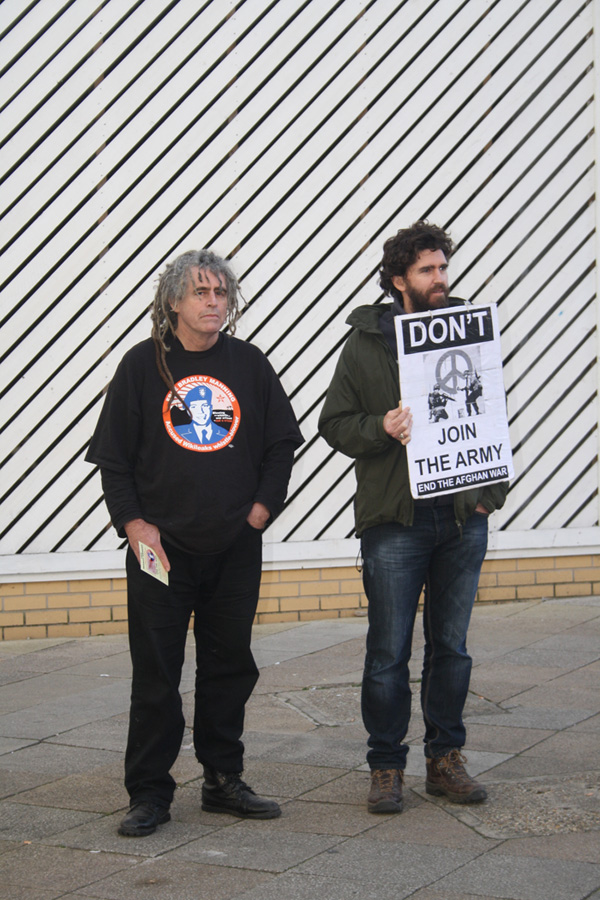 Eight Catholic Workers held a peaceful vigil outside the Army Recruitment centre in Watford on March 20th. One of the signs reading: "heal the wounded, mourn the dead, end the war"

The Watfford Army Recruitment Centre continues recruiting for a war on Afghanistan that has now gone longer than WW1 and WW2 combined. With, at last count ,404 British military fatalities and uncounted Afghan dead part of the consequence of the invasion of Afghanistan. This U.S. directed war has no popular support in Britain but alas little visual opposition.

Today's vigilers included a U.S. Air Force veteran and 2 Catholic Workers who had been previously imprisoned for plowshares disarmament actions on a B-52 Bomber, nuclear convoy vehicle, uranium mining equipment and a U.S. war plane en rote to Iraq. Animated debates on the street about the ongoing war, inteaction with military staff, support and insults from passersby were responses to the vigil. To "vigil" is to remain awake. The warmaking state prefers we slumber as the war escalates and expands

The Catholic Worker is a radical pacifist movement that started in New York City in 1933 by anarchist suffragete Dorothy Day and French philospher Peter Maurin. Today, its over 200 autonomous communities wed direct service to the homeless with nonviolent resistance to war and war preparations. In England, the Catholic Worker focuses on direct service to desitute refugees, many fleeing countries ravaged by corporations and military elites headquartered in London. The Catholic Worker refuses all state funding relying on donations and volunteers from various faith and nonfaith backgrounds to sustain its various projects

In Dalston. the Catholic Worker sustained a two year campaign of weekly vigils and nonviolent direct action against the Army Showroom until its recent closure.

In its anti-war work, the Catholic Woker prioritses nonviolent direct resistance and solidarity with anti-war resisters. Over the past year, the London Catholic Worker has been active in solidarity with Bradley Manning and Julian Assange accused of exposing war crime in Afghanistan and Iraq and Michael Lyons a British Navy medic imprionsed for refusing to deploy to Iraq.